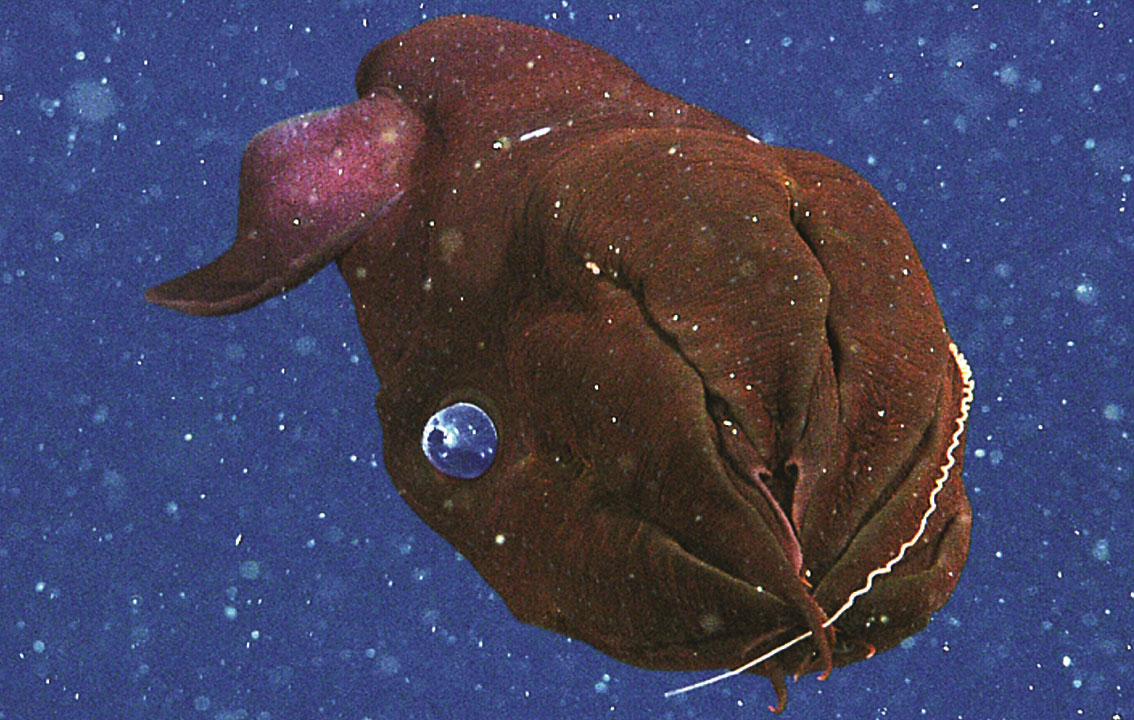 A vampire squid using its arms to scrape food from one of its filaments. Credit: Monterey Bay Aquarium Research Institute, 2008
You might think a creature called the vampire squid would suck the blood of an unfortunate passing fish. After all, other octopus and squid species hunt live prey. Instead of preying on the undead, however, the vampire squid simply feasts on the dead.

A vampire squid is the size and shape of a football, with a blood-red body, enormous blue eyes and eight arms, connected by a thin membrane that creates an umbrella-like basin around its mouth. But it's the thin filaments extending from the squid's body – about eight times longer than the body itself – that help the creature catch food. Living deep in the ocean with little light, the vampire squid's sticky filaments catch the "marine snow" that falls from above: dead bodies of microscopic algae and other tiny animals, bits of krill feces, and mucus produced by zooplankton. After catching bits of corpses and debris, the squid pulls the filaments through its arms, extracts the food particles, coats them in mucus and then transfers them to its mouth.

It took a while for scientists at Monterey Bay Aquarium Research Institute to learn about this diet. Examining the squids' stomachs didn't reveal much, so biologists viewed over 23 hours of vampire squid film footage taken from deep sea vehicles. They watched the squids feed themselves and even noticed remnants of dead animals, feces and mucus hanging from the squids' mouths. Then biologists captured live squids to observe more closely in the lab and to examine their filaments under microscopes to identify the food particles. These fascinating creatures may look and sound vicious, but they actually just cruise along harmlessly, munching on the smorgasbord "snowing" down on them.