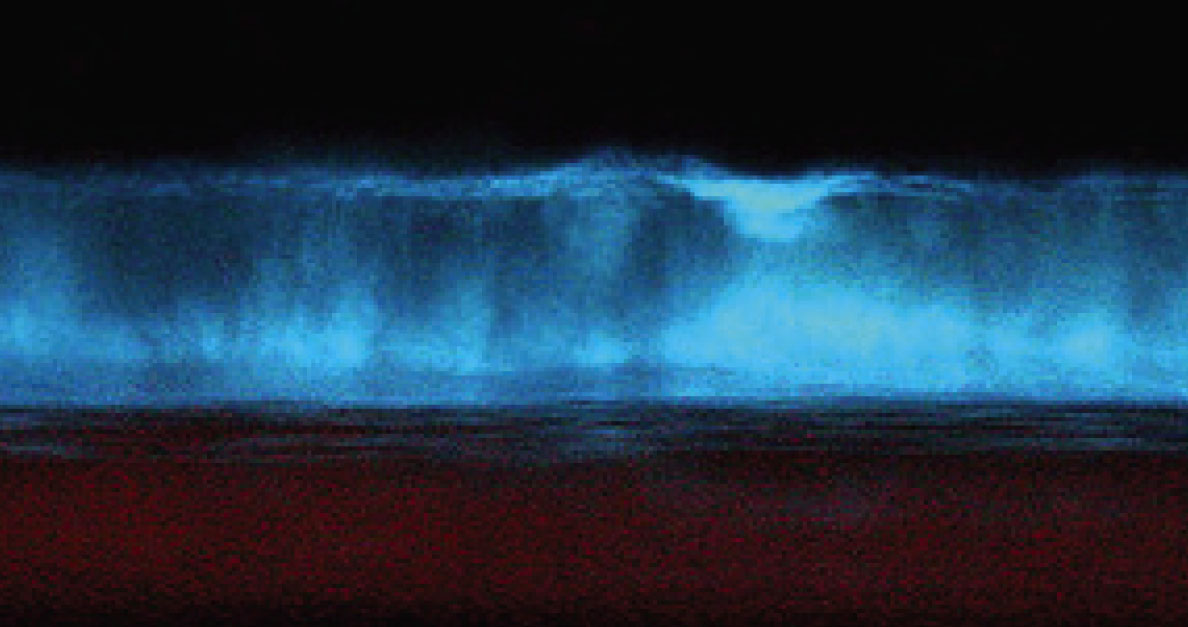 Bioluminescent waves containing billions of dinoflagellates. Credit: Wikipedia. This image is licensed under the Creative Commons Attribution 2.0 Generic license.
Perhaps you’ve heard of a full moon so bright you can read by its light. But what if you could also read by the light of ocean waves — at night, with no moonlight at all? If you’re in one of Puerto Rico’s famous “bioluminescent bays,” you might be able to. In these three bays, the water is full of tiny plankton called dinoflagellates which produce neon blue light called bioluminescence.

Bioluminescence is not like a glow-in-the-dark toy, which glows from light it has absorbed. It’s more like a glow stick, which creates its own light from a chemical reaction. The light in dinoflagellates is triggered by movement in the water. The chemical reaction involves a compound called luciferin, named after the devilishly eerie glow it produces.

Scientists don’t completely understand why dinoflagellates create light, but it’s thought that they use it for defense. The flashes of light may startle grazing predators away, or the light may attract other predators to eat the ones feeding on the dinoflagellates. Although the light seems like a continuous glow to human eyes, it’s actually a series of flashes lasting about one tenth of a second each.

Only a few places in the world have a concentration of dinoflagellates dense enough to create the blue brilliance seen in Puerto Rico’s three bays. But the tiny creatures exist throughout the world’s oceans, from San Diego to England to Turkey to Japan to Australia. When enough of them gather in one place, they sparkle like stars when boats cut through the water, porpoises jump among the waves and humans wiggle their toes in the surf.