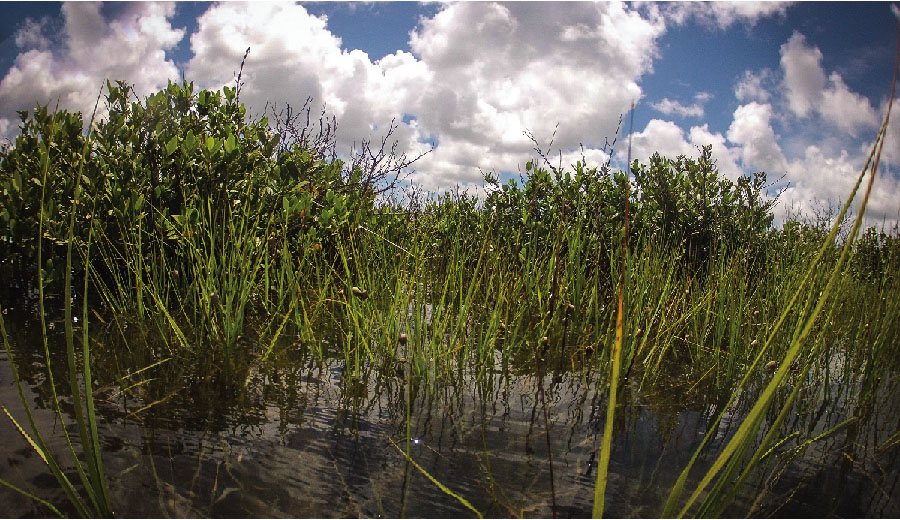 Salt marsh in Redfish Bay, Texas. Credit: Charles Foster, University of Texas Marine Science Institute.
When we think of a pristine shoreline, we don’t usually picture manmade structures in the scene, but jetties and retaining walls are common sights along many waterways. Waves that continually crash against the shore release energy that can erode waterfront property. Bulkheads, retaining walls, and revetments are designed to protect shorelines by minimizing erosion. Over time, however, these structures may actually increase erosion by altering nature’s ability to replenish sensitive coastal areas.

Recently, a new approach to protecting shorelines has emerged. This technique is called a “living shoreline” because it uses plants instead of rocks or concrete. Living shorelines are an environmentally-friendly way to protect shorelines from erosion while also preserving these sensitive coastal habitats.

Living shorelines use plants that are native to the coast and, therefore, adapted to harsh conditions. They are able to live not only in salt water, but also in areas where the tide may leave them high and dry, or completely submerged, for several hours each day. These magnificent marsh grasses, when planted as living shorelines, reduce erosion because they absorb much of the energy of waves. Instead of slamming up against a concrete wall, the waves gradually fade out over welcoming blades of coastal grasses. Living shorelines also create nursery habitat for the small fish, crabs, and shrimp that depend on coastal marshes to complete their life cycles.

In some cases, using a hard structure, such as a seawall, may be the only solution, but when conditions are right for using a living shoreline, the result can be an aesthetic and ecological treasure that is every bit as beautiful as a pristine coastal shoreline.