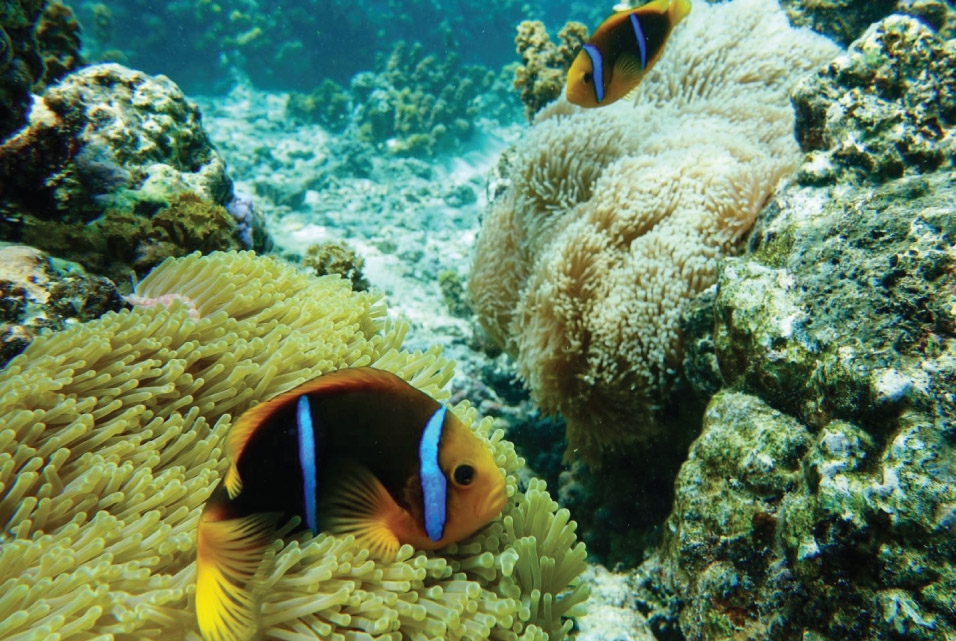 The golden color of the anemones is due to the algae present inside their tentacles. During high temperature episodes, the algae are expelled, which causes bleaching. Credit: Suzanne C. Mills
Nemo may have been interested in exploring the great big ocean, but his dad Marlin’s attachment to their anemone is the norm for real clownfish. Sea anemones protect clownfish—and the eggs clownfish lay at the anemone’s base—against predators. But scientists recently learned that an anemone can only protect clownfish if the anemone itself remains healthy. When higher water temperatures stress anemones, clownfish fertility suffers.

Researchers studied 13 pairs of clownfish and their home anemones every other day for 14 months, from October 2015 to the end of 2016. During that time, the combination of an El Niño event and changes in the climate warmed the Pacific Ocean by about two degrees Celcius above 2007-2015 temperatures in the area studied.

Like corals, anemones host algae whose photosynthesis provides the anemone with oxygen and sugar. Also like corals, anemones expel the algae when stressed by higher temperatures. Losing the algae turns the anemones white, just like bleached coral. Clownfish suffer from the algae loss too. Clownfish associated with bleached anemones laid fewer eggs each month than clownfish at healthy anemones, and 73% fewer eggs survived near bleached anemones. The researchers also took blood samples from the clownfish associated with bleached anemones and found higher levels of the stress hormone cortisol but lower levels of sex hormones.

Three to four months after the warming, both the anemones and clownfish were healthy again, but scientists don’t know if the experience weakened both animals’ ability to survive another warming episode, or whether they would have survived a longer or more intense warm spell. For Nemo and his friends to raise their own healthy families one day, scientists will need to learn more about anemone bleaching and its effects on clownfish fertility.