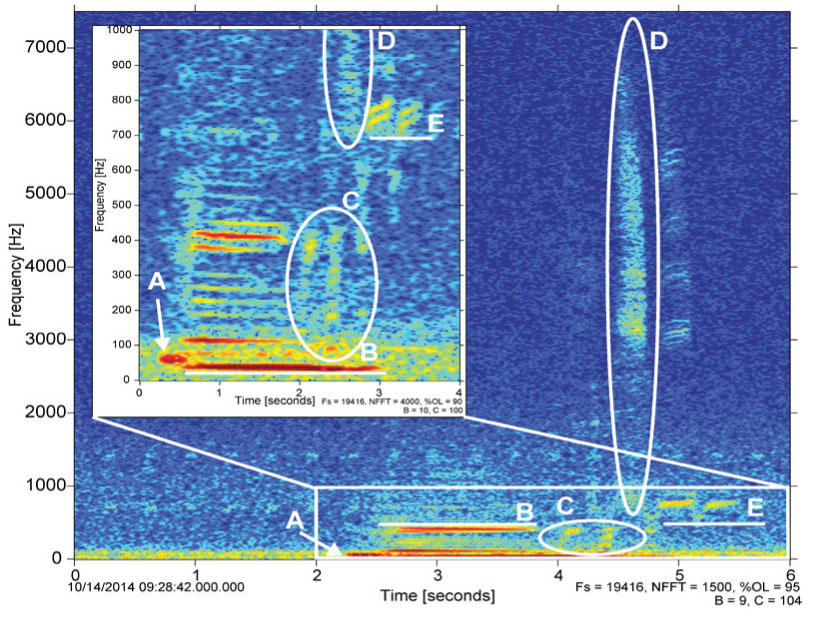 A spectrogram of the “mystery sound” recorded on October 14, 2014. Credit: Journal of the Acoustical Society of America, 2016

They went looking for typical calls of blue, minke, fin, humpback andother whales who live in the area of Mariana Trench Marine National Monument, a nearly 100,000-mile region east of the Philippines near Guam. The team of acoustics scientists from Oregon State University and Cornell University “flew” an underwater robot 1,000 meters deep to record sounds in the area. But they stumbled upon a mysterious sound they had never heard — or seen — before.

“As acousticians, we spend a lot of time looking at sounds, rather than just listening to them,” explained one of the scientists, Selene Fregosi. They see the sounds in maps they create, called spectrograms, which show the timings, frequencies, and intensities of sounds. The team set about trying to determine the mysterious sound’s source, starting with whether it was biological or not. They captured the sound hundreds of times and saw that it was consistent—but not so perfect each time that it could have come from something mechanical.

“There was a little variation, sometimes louder, sometimes quieter,” Fregosi said. They ruled out other sea creatures because of the sound’s duration, intensity and similarity to other whale calls. A systematic comparison to other whales’ calls found it most resembled the “Star Wars” call of the dwarf minke whales of the Great Barrier Reef. The call is named “Star Wars” because its metallic-y “ping-ping-ping” sounds like a spaceship shooting little lasers. Both the mystery call and the Star Wars call also cover the same frequency range of 38 hertz to 7,500 hertz.

They hypothesized the sound could be a previously unknown type of minke whale call. Two minke whale populations live off the coasts of Japan and northeastern Russia, directly north of Guam, but no one has heard their calls, and many species of whales migrate to equatorial latitudes for breeding. The next step in the investigation is to seek out the sounds again and attempt to triangulate to its source. If the scientists can collect a biopsy of the mysterious singing whale, they can use genetic analysis to identify it and solve the mystery.