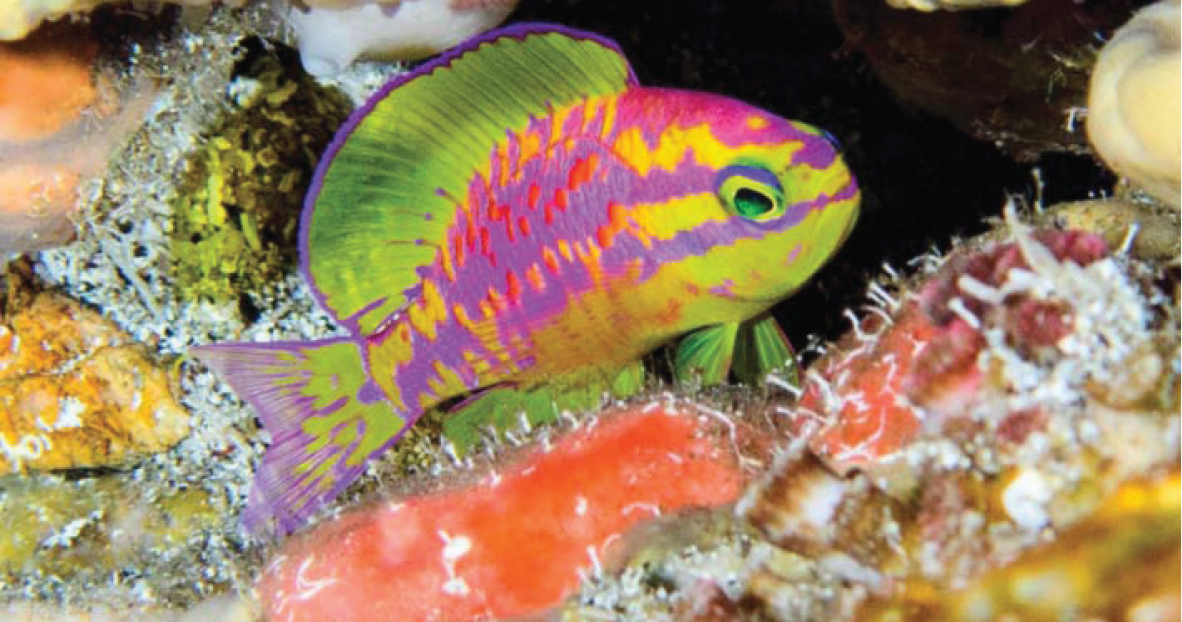 As much as people have learned about the oceans and the animals within them, nearly 2,000 new marine species are discovered every year. One of those newcomers so enchanted the scientists who discovered it that they named the small reef fish after Aphrodite, the Greek goddess of love in classical mythology.

In the gleam of an underwater flashlight, the bright fluorescent yellow of Tosanoides aphrodite and its hot pink stripes are hard to miss, but the pink actually helps protect this brilliantly colored fish. When a pair of biologists found it, T. aphrodite was hiding in the rock crevices of a reef 400 feet deep. That’s in the ocean’s twilight zone, where very little light—and no red light at all—reaches. Without any red light, the Aphrodite fish’s pink stripes help it disappear into the darkness, shielding it from the eyes of passing predators. Only the males display flamboyant pink stripes. Females are solid blood-orange, which similarly helps them vanish into the twilight zone’s darkness.

So far, the deep waters below St. Paul’s Rocks, a remote, unpopulated archipelago off the coast of Brazil, remain this new species’ only known home. But, the ocean’s twilight zone is an underexplored area because it’s too deep for recreational scuba diving, but shallower than the pitch black midnight zone where submarines and remotely operated underwater vehicles typically gather data. Now that they have started to explore the twilight zone, scientists have been discovering rich communities of marine creatures there, and they may find other populations of this species as well as species yet to be discovered.