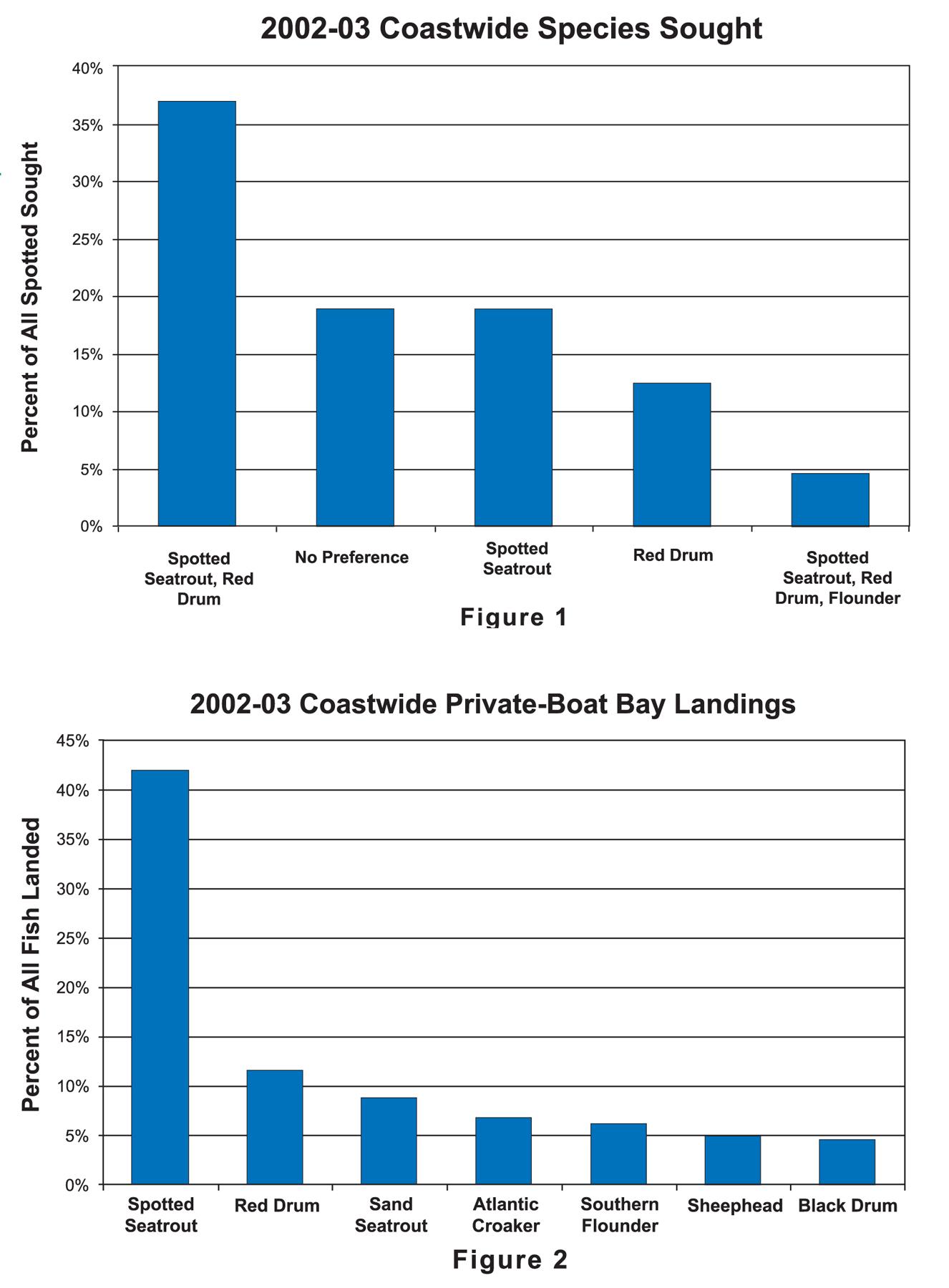 No, that's not my Christmas wish list; it's the top five responses to the question, "What kind of fish were you fishing for on today's trip?" That's one of the questions Texas Parks & Wildlife Department (TPWD) staff ask on angler surveys (Figure 1). These particular data represent non-charter private boat anglers who fished in bays and passes. Nothing too surprising here; trout, reds and flounder, the "grand slam", are the most popular bay fish along the Texas coast. These top four responses represent 92% of all responses from this type angler.

From these same angler survey data it can be seen that the three fishes most often targeted are indeed landed in large numbers (Figure 2). Tops in coastal landings are spotted seatrout. That's expected because of their popularity and a 10-fish bag limit. Second are red drum (three fish limit), followed by sand trout (no bag limit), Atlantic croaker (no bag limit), southern flounder (ten fish limit), sheephead (five fish limit), and black drum (five fish limit). No surprises here either, most of these species are seen regularly at the cleaning tables.

What is not immediately recognizable in the survey data is what many of these fishes have in common. Four of the top five 'species sought' responses are occupied by spotted seatrout and red drum, members of the same family, sciaenidae (sci-an-a-dee; from the Greek sciaen meaning "sea fish" and the Latin idae used to denote family names), the drum or croaker family.

Similarly, five of the top seven fish seen during angler surveys are from the same family; spotted seatrout, red drum, sand seatrout, Atlantic croaker, and black drum. Even more surprising is the proportion of all landings represented by these five fish: 74%! In other words three out of every four fish landed from Texas bays by non-charter sport anglers are sciaenids. Bone remains found in Indian middens indicate that red drum, spotted seatrout, Atlantic croaker, black drum, and other species were also enjoyed by native Texans thousands of years ago. Sciaenidae is definitely the first family of Texas saltwater fishing.

There is more to this family of fish than can be seen at the cleaning table. H. Dickson Hoese and Richard H. Moore, authors of a popular fish identification text, list 19 members of the sciaenid family occurring in our area. Of these 19 species 4 are apparently very rare in state waters, and the TPWD database contains only 16. In addition to those in our area already listed above, this family includes silver seatrout, southern whiting, Gulf kingfish, northern whiting, sand drum, banded drum, silver perch, star drum, cubbyu, reef croaker, spotted drum, and jackknife fish. The last three species are not present in the TPWD database of fish that have been collected during sampling. Photos and descriptions of many of these fish can be seen online at www.fishbase.org or in the Hoese and Moore text (H. D. Hoese and R. H. Moore. 1998. Fishes of the Gulf of Mexico: Texas, Louisiana, and Adjacent Waters. Texas A&M University Press).

Despite being present in our area several of these sciaenids are seldom seen by anglers because of their size, where they live, or their rarity. These include spot, sand drum, northern whiting, star drum, banded drum, cubbyu, jackknife fish, reef croaker, and spotted drum. Some of these species are so uncommon many biologists seldom see them. Spot are common in the bays and move out in the fall with Atlantic croaker and southern flounder. Star drum and banded drum are common in the Texas Territorial Seas (Gulf state waters from the beach out to 9 nautical miles), and in bays near passes and jetties. Finally, there is one member of the family found in Texas freshwaters, the freshwater drum, or gasper goo. "Goo" are native to North and Central America where they are found in both rivers and lakes.

Other prominent members of this family not native to Texas waters are found on both the Atlantic and Pacific coasts. Weakfish, a close relative of spotted seatrout, inhabit the waters off the east coast while corvina, another close relative of spotted seatrout, can be found off the eastern Pacific coasts of the United States and Mexico. Both of these species are prized sportfish. Corvina have also been introduced into The Salton Sea, a saline lake in southern California, and in Calaveras Lake near San Antonio. They are no longer found in Calaveras Lake but The Salton Sea remains a destination for anglers seeking this fish.

You have now been introduced to the sciaenid family tree. In the coming months and years, as you pursue your favorite catch, make it your business to become familiar with as many varieties of sciaenids as you can. They are an important piece of the ecological puzzle in Texas bays. And, although sciaenidae is a large family with more species in our area than any other family, it is only one family; there are many other family's that contribute to the rich marine endowment we Texans enjoy. The more you know about this environment and its inhabitants, the more enjoyable your trips on the bay will be. Enjoy your holiday fishing and be safe on the bay.