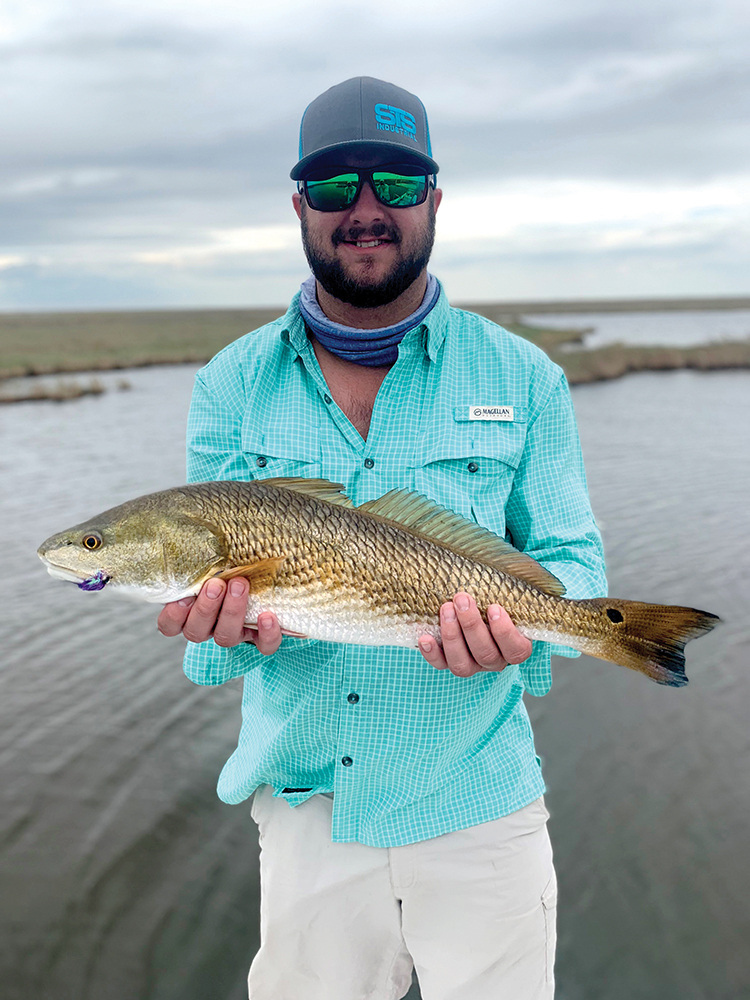 Lucky for me, it doesn’t not take much to make me happy. I’ve learned to appreciate the little things and that’s exactly what keeps me going. One of these is flipping the page of my calendar to October. Lots of folks might not get it but that one little word brings a smile to my face and changes my whole attitude.

So, October is without a doubt my favorite month of the year, and rightfully so. For starters, the sweltering heat of long summer days is finally behind us and that in itself is enough to rejoice. Along with cooler temperatures, nature’s preparation for winter begins and this creates a scenario for some of the finest fishing of the year. Baitfish, especially mullet, that have thrived in the marsh through spring and summer will begin to migrate to the gulf. As they make their journey, every predator will gather to take full advantage of the situation, including anglers.

One of the greatest aspects about this time of year is the ease of being able to locate fish. Through summer, it is sometimes difficult to pattern the movements of redfish as they often roam and feed singly or in small pods. However, come October, redfish will tend to form larger schools and work together during foraging. As this is happening, they are much easier to find by sight, and sometimes even by sound. I cannot express how much I enjoy being in the marsh on a calm October morning and hearing a school of hungry redfish crashing along a shoreline, mullet and shrimp fleeing helter-skelter trying to avoid being eaten. Ahh, the sounds of October!

As far as trout are concerned, they too will be getting in on the action. You can find them ganging in large schools along just about any main lake shoreline or near cuts and sloughs waiting for shrimp and other baitfish to swim through. Whenever the tide turns and begins to recede toward the gulf, so will the bait. Waiting for them to fall into the lake are hundreds of hungry trout. When fished properly, anglers can sit in one spot and catch trout for hours, sometimes throughout the day.

Fish are not the only animals that are feeding heavily during this time. Our avian friends also take advantage of scurrying bait being pushed to the surface by schooling gamefish. A shrimp popping out of the water escaping a hungry trout or redfish makes for a quick and easy meal for any gull, tern, or egret. One tip that every angler should remember is to always pay attention to the birds. If you are in the marsh flats, keep an eye open for egrets lined up down the shoreline at the water’s edge. If you see this, slow down and fish that area. There are fish nearby and as they swim, bait will scatter and the birds are waiting for that to happen. You can also see them playing a game of leap frog down the shore; this will indicate which direction the fish are moving. An angler should never pass up shorebirds!

When fishing in open water, seagulls and terns are a dead giveaway of schooling gamefish. “Chasing the birds”, as many call it, is arguably one of the most fun things inshore anglers can do. Usually there are dozens of birds fighting over escaping bait, which makes it easily recognizable from a considerable distance. Once you get there, it’s nearly a guarantee to catch numerous fish. Two very important things I have learned the hard way chasing birds – shut down and idle or use a trolling motor to slowly get within casting range. Motoring into them full-bore will spook the birds and send the fish packing. I have seen this happen time and time again from inexperienced anglers and it will immediately ruin everyone’s chances when other anglers are there ahead of you. The other tip is to avoid the temptation to throw a topwater! I know watching a fish blow up on your lure is exciting but when there are that many birds around, they’ll be all over it, too. They will hover above it and pick it up, potentially getting hooked or tangled in your line. The last thing you want to deal with is trying to untangle an angry bird with treble hooks swinging about dangerously.

Since the weather is near perfect in October, it makes spending a full day on the water much more manageable. My typical game plan is to get the boat launched at first light and then ease out into the main lake or bay and begin looking for feeding gulls. Binoculars can be a great aid in this. Once I hit a few groups and the sun begins to get a little higher in the sky I usually head to the marsh. After spending the day chasing marsh reds, I like to head back out to open water and chase birds until dark. It’s the perfect scenario!

October, in my opinion, is a one of a kind month and stands alone in its own category. It is filled with everything an angler could ever want. Between the ideal days with cooler temperatures, plentiful and cooperative fish, what more could you want? Be sure to get out with your family and friends to enjoy what Texas has to offer. You sure don’t want to miss out!

Tips for Fishing the Jetties