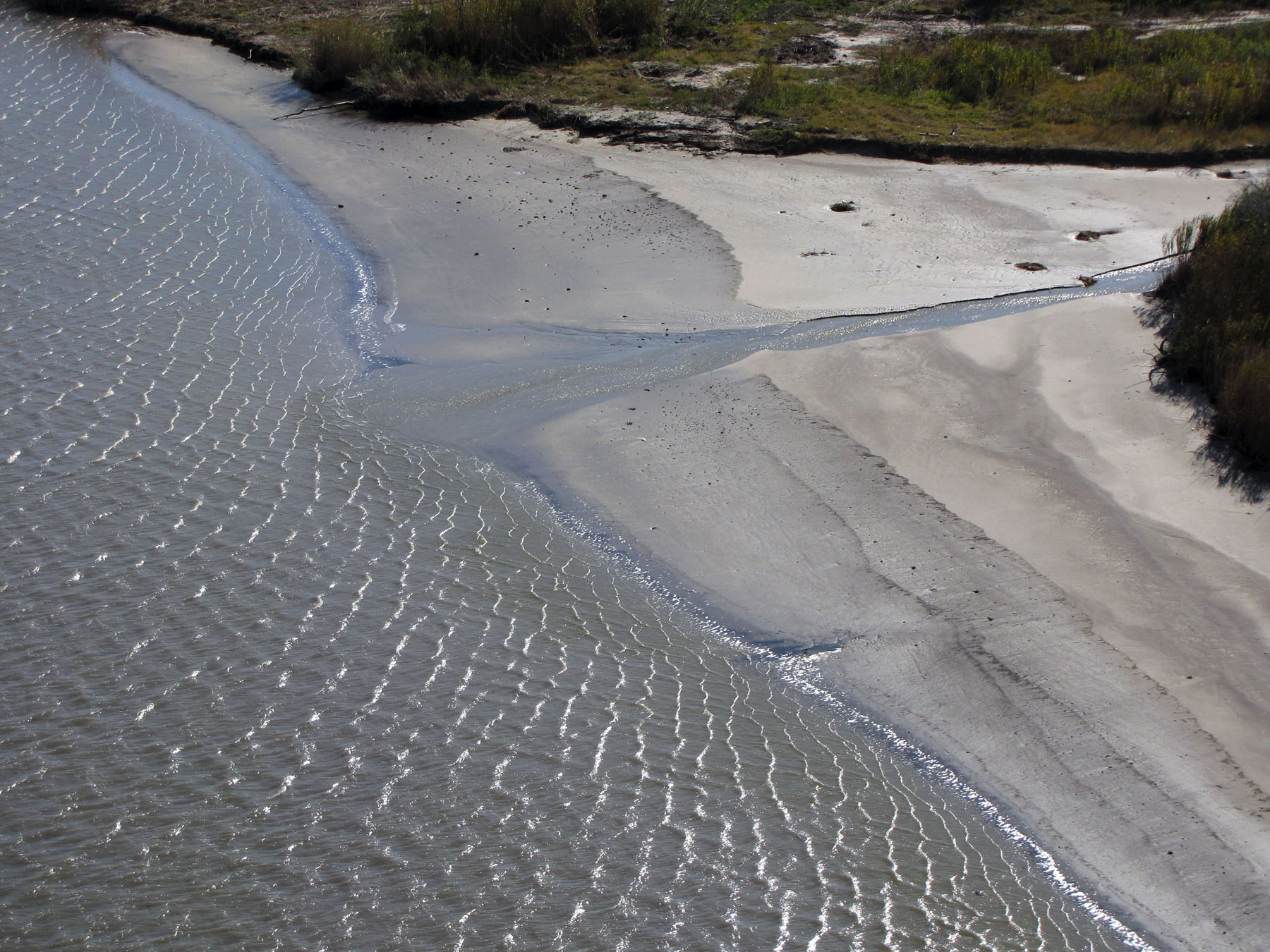 Winter weather and low tides expose many bottom contours that are not visible during other seasons.
Getting out of the boat to go wade fishing makes as little sense as jumping out of a perfectly good airplane. "That just ain't natural," they say. Yet nothing could be further from the truth for those who like to get in the water.

It seems like forever ago that I saw the first wade fishermen on Sabine Lake, a band of anglers waist-deep behind one of the barrier islands on the north end. I can remember it like it was yesterday because it was such a shock to see people out of their boat. Looking through binoculars with a grin, all I could mutter was; "Now look at these fools!"

A few minutes of observation went a long way toward proving who the fool was, though. When the first rod doubled over I quickly called it luck, a wayward redfish that had no doubt wandered into casting range. That thought was quickly dismissed as the fish came to the surface with the ferocious headshake of a magnum trout. I looked on in disbelief as two more rods doubled under the weight of yet another pair of big trout. This display went on for quite a while until I could take no more and had to leave, all the while wondering if this was a fluke or were those guys really onto something. My suspicions were later confirmed as I made my first wade later that week to be rewarded with several of the best fish I had caught in quite some time.

Now that episode happened over fifteen years ago and a few more like it changed the way we looked at fishing on Sabine Lake forever. Up until that time we basically left Sabine after Christmas and spent the next several months on Toledo Bend or Sam Rayburn believing every trout in the bay had left for the Gulf of Mexico. Those early waders opened our eyes and made our own home lake brand new to us, we now could fish year around and catch bigger and better fish.

The trend toward wade fishing took off like a rocket and soon everybody who was anybody was suddenly an expert. It was hilarious to see all the brand new pluggers, grinders, and hardcore waders step to the podium to claim their glory. Truth was, most of these folks had never owned a pair of waders in their life and the ones who did used them only for duck hunting.

So now the whole world is convinced that the only way to catch a big trout is to get out of the boat and wade. It has grown so prevalent that even the Cajuns on Calcasieu have adopted the technique. These were the same guys who for a couple of years threw Super Spooks at the first waders over there to drive them off. Talk about a role reversal.

Okay so we have established that the only way to catch a big fish is to wade, correct? In the words of comedian Ron White, "I don't think so Scooter!"

I will readily admit there are a bunch of great fishermen out there and some of them write for Texas Saltwater Fishing. They can fish circles around me and I have no problem giving credit where credit is due. However, and having said that, I can lay claim to landing four trout over thirty inches thus far in my career. I'm sure there are many who have landed more, and I respect that too. However, the thing that possibly separates my fish from theirs is that all of mine were caught from the boat. I have never caught a trout of double digit weight or thirty inches while wading. I know this may sound like blasphemy but you can actually catch big trout from the boat.

OK enough of the sarcasm. I'm just trying to highlight a point that seems to be forgotten for whatever reason. Yes, I do believe that wading gives you a much better chance of catching not only a big fish but more big fish from an area that lends itself to the wading game. I also believe there is water out there where big fish lurk that is inaccessible to the wader and tailor-made for the angler who remains in the boat. Each method will produce and they both have their pros and cons to say the least.

As far as wading goes the benefits are routinely chronicled in TSFMag so in order to keep you the reader from having to read the same stuff from me, I will be happy to leave that subject to the real experts like Jay Watkins and Mike McBride. These guys have the wade technique and mentality down to such a precise science it's scary. The nuances these guys detect and key in on are mind-blowing; they are truly specialists in every sense of the word. Now I, on the other hand, will continue to play to my strength and share knowledge about subjects that I am comfortable with, which in this case is fishing in a little deeper water than what the waders use.

During the winter months the opportunity for discovery is great. The clearest water of the year and lower water levels allow you to see things you would otherwise never know existed. In winters past we have uncovered some real fish magnets on Sabine, little patches of shell that under normal conditions lie at least half-a-cast out of range of wade fishermen. And since few boat anglers take time to explore, the few who know guard the knowledge closely and the areas see little fishing pressure.

By taking care to keep hull slap and other noise to a minimum, a careful angler can position their boat down-current from these pieces of structure and cast to them in order to make a realistic presentation. Having your bait swim with the current is highly preferable since the predator will be facing into the current waiting on the next meal. There are plenty of areas just like this all along the Sabine shorelines and they will produce some impressive fish, especially in the coming weeks as we go through winter and head into spring.

Perhaps the most important factor in achieving success in fishing from the boat is to be prepared to make a cast as soon as you arrive. Fumbling around the boat dropping hatches and stomping around on the deck will not cut it; ditto dropping a conventional anchor. Devices such as the Power Pole or the increasingly popular Stake-Out Stick are perfect for stealthy anchoring. All commotion must be kept to a minimum, even when fighting a fish. Let the tide or wind pull you and the fish away from the shell in order to keep the area as undisturbed as possible. A little preparation and thought go a long way in situations like these.

Each technique, wading or fishing from the boat, has its place and each one can be incredibly productive if done the right way. Give yourself the opportunity this winter to use both methods and not be locked into just one. By perfecting them both you can make yourself a much more successful angler and this will ultimately lead to a more enjoyable day on the water.