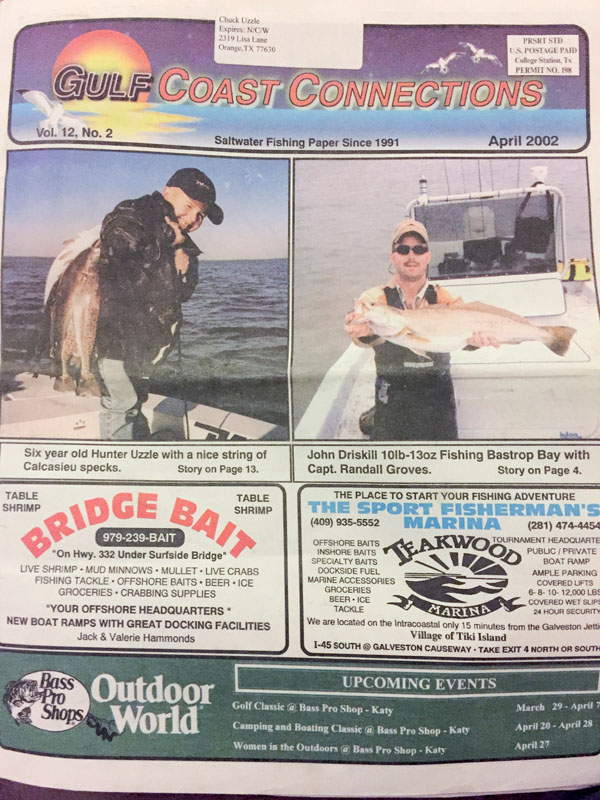 The same as TSFMag today, its Gulf Coast Connections forerunner was always a source saltwater anglers could rely upon. The author’s son Hunter Uzzle was ecstatic to share the front page.

It was my habit years ago to load my pockets with about $4 in change every Thursday morning. That $4 was my link to the outdoor world and I religiously donated my spare change to get my weekly "fix" from the Houston Chronicle, Houston Post, Beaumont Enterprise, Port Arthur News, and Lake Charles American Press. With my papers gathered I would quickly sift through the "unimportant" world and state news sections and anything not sports related, immediately discarded as if the sheets were blank.

I could not wait to read the latest columns from the likes of Joe Doggett, Doug Pike, Shannon Tompkins, or Ed Holder because they were as good as gospel in my opinion. Invariably, there would be stories of exploits in south Texas where speckled trout grew to the size of dinosaurs and whitetail deer rivaling anything walking on four hooves. Epic tales of topwater action from famous locales such as Baffin Bay and the Laguna Madre captivated my imagination and made me long for the opportunity to see and fish such a hidden part of the world.

In those days, the fishing and hunting reports that were published in the daily papers would be regarded as ancient history by today's standards. The time required for a report to be written, printed, and in the hands of the reader was often a week, sometimes longer. Occasionally the Texas fishing community would rumble behind the scenes when word would spread of an epic fish being caught and not reported usually in attempt to hide the secret and prevent the rush of anglers that were sure to follow. Rumors and stories of biblical proportions would ensue and the curiosity would reach a fever pitch. Eventually someone, usually an outdoor writer, would address the report and share it with the rest of the world, who could then focus on the next big fish event.

One particular fishermen who was no stranger to these reports was Jim Wallace. By now I'm sure most everyone has been made aware that Jim passed away recently and he certainly left behind his share of big fish stories. Wallace was Texas saltwater royalty and his big trout exploits were widely known. Over the years his legend grew and the stories that circulated were always "certified" as truth, even if some were embellished with retelling. To be held in such high regard for so long by the Texas fishing community, Jim did a fantastic job of shying from the limelight. He could be found on just about any bay on any day, usually by himself, and with no flash or fanfare to draw attention.

For several weeks during an incredible run on big trout in Sabine Lake in the early 2000s, I would see him heading out in the evening as I would be heading in from a day on the water. I met Wallace through Jim Leavelle and we fished together a few times, enough that he would greet and speak when we had chance to meet. We would exchange a few words at the dock but I never told my clients who he was because I knew that as soon as word got out that Wallace was digging around on Sabine it would attract unwanted crowds.

When Wallace broke the 21-year-old Texas state record for speckled trout on February 6, 1996 in Baffin Bay with a 13-pound 11-ounce giant, he became a marked man. I can only imagine how crazy that situation would have been had it happened today with all the social media. I remember when the word started to circulate about Wallace's big fish, the saltwater world in Texas went crazy and the number of folks who took off for Baffin was just stupid. At least at that time it took a few weeks. Try that today and you would likely see a flotilla on Baffin the next morning.

For as much as Jim Wallace will be forever associated with Baffin, others made their marks similarly on other bodies of water through those Thursday outdoor sections. Nobody discussed Rockport without mentioning Chuck Scates. Melvin Talasek was Matagorda Bay personified. The Silver King boys, Plaag, Trimble, Skillern, and Bailey ruled the roost on Galveston. Jim Leavelle was another Galveston icon during that era. Mickey Eastman was the man on Trinity and likewise Lynn Smith at Port O'Connor. The list goes on.

A look back at how they helped shape the fishing scene along the Texas coast always puts a smile on my face. In fact, I met Bink Grimes, one of my best friends, through one of those Thursday outdoors sections. Bink spearheaded putting reports together from up and down the coast for the Chronicle and I became a contributor for Sabine Lake. We talked fishing and hunting for well over a year before we ever met face to face and we have been friends ever since.

Fast forward to today's electronic, in your face-right now-instant gratification world and one can see how the world, and specifically the water we fish, has become much smaller.

The aura and mystery of big fish in newspapers has given way to technology and an information highway flowing at virtually unlimited speed. More than a few folks have learned hard lessons after posting pictures and videos for all the world to see. "Internet scouting" has burned many an unsuspecting angler as clues left behind in an innocent photo offer exact GPS coordinates if you know how to detect them. More and more anglers have begun paying closer attention to the background in their photos, some even alter landscapes to avoid detection. As the world grows smaller it becomes increasingly imperative to protect the location of an area you fish regularly or invested serious scouting effort to find. You can be absolutely certain that if you leave a clue to your whereabouts, someone will figure it out and you will have more "fishing buddies" than you ever dreamed. Trust me, I have seen people bragging on social media getting burned by their need for attention. Hilariously, with nobody to blame but themselves.

Speaking of getting burned, Texas Parks and Wildlife monitors social media and often uses it when investigating and prosecuting cases. You would be surprised at how many game law violators are dumb enough to post videos and photographs of illegal actions on social media. Like comedian Bill Engvall says, "Here's your sign!"

Now please do not get the notion that I'm the old guy at the end of the block that screamed at all the kids for cutting the corner and walking on his lawn simply because I want to turn the clock back to 1990. On the contrary, I appreciate the new technology and the instant feedback it gives to anyone who is willing to both post it and go look for it as well. The information is helpful to all fishermen and can be a great tool. The flipside of the argument is that you cannot broadcast your adventures and not expect to gain unwanted attention and more anglers competing for your water. Use the technology wisely and find a happy medium.

When posting photos, take care to avoid showing landmarks or other obvious features that can be easily tracked or identified. A little bit of time taken to set up a photo can go a long way towards keeping a location from getting overrun by "internet scouters" or others trying to take the easy way out. Once you have your photo set up where the location isn't given away, feel free to share it with world and be proud of your accomplishment.