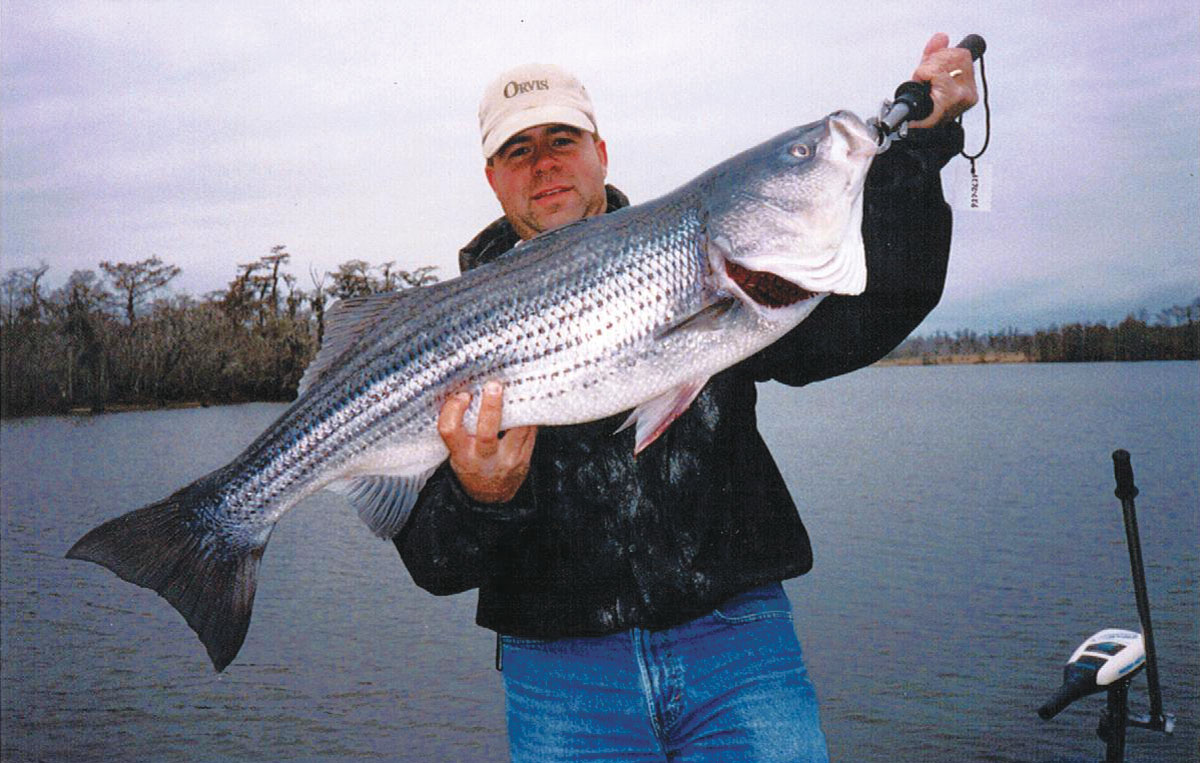 It is always the hope of fishermen to do battle with a mighty fish, a giant of epic proportions that will live forever in memories. For most folks who do not regularly frequent offshore waters, your choices of really big fish are rather small. The occasional redfish of 35 to 40 inches are often the biggest boys in the neighborhood next to alligator gar or maybe a big catfish. You can add a pair of names to the list of heavyweights that routinely make a name for themselves during this time of year though, black drum and stripers.

While the dedicated legions of big trout anglers are waist deep on a shallow flat, there a few folks taking advantage of another bite that offers up a real opportunity to tangle with a monster. The jetty systems that line the channels become a highway for some very underrated and oversized fish as big black drum congregate in the deep holes there that have eroded over time.

Under normal conditions black drum can be found in respectable numbers most of the year. Generally speaking, the drum that are found on the north end of Sabine Lake and in the Sabine River usually run anywhere from 12 to 20 inches. During winter is when the big fish show up. While fishing the Sabine River and Intracoastal Canal in January and February I have had at least a dozen black drum over 40 pounds caught by clients using live shad or cracked crab. Let me say this, a drum that size is a real deal workout any way you look at it. For nearly every person who catches one that size it's the biggest fish they have ever caught on a rod and reel and a proud day for a guide when they can put people on the biggest catch of their career.

The really big fish are normally found closer to the jetties, along the ship channel, and out in the gulf. On a run out to the lake recently I stopped to watch a fisherman do battle with one of these giants. Slow powerful runs kept the rod bent nearly double as the beast worked the drag system for more than 20 minutes. My clients and I were amused by the fight and shouted encouragement and congratulations as the fish was finally brought to the boat. Perhaps the best comparison of what happens when you tie into one of these giants is hooking a runaway fork truck. They won't outrun you but you just can't stop them.

Big black drum can be caught on a variety of baits, shad, mullet, or shrimp are good options but the best bet is crab. Big black drum are suckers for a piece of crab fished on or near the bottom. Popular rigging for this method consists of hooking a 1/4 of a whole crab onto a 3/0 or 4/0 live bait hook that is tied to a 1/2 ounce weighted Carolina rig with 18 to 24 inches of leader. Some fishermen beef up their tackle by using 20 to 25 pound test monofilament and heavy rods; use your own discretion and just remember what they say about chasing a bear with a switch. Hooking and landing a fish in the 40 to 50 pound class is real treat for any fisherman, especially those of the inshore persuasion. Big fish like these don't come around often so take advantage of the opportunity.

Now the other member of this 1-2 punch is another hard pulling specimen that receives little pressure due the places where they normally reside. Striped bass are a welcome diversion for local fishermen during winter and early spring. Many anglers only find these brutes by accident as they probe the river for redfish. It wasn't until the last five years or so that we really got to pattern these fish and become proficient at catching them. Most of the ones we caught were strictly by accident while chunking crankbaits along the shorelines and at the mouths of the marsh drains while targeting redfish. The toughest ones by far to catch are the ones that suspend in the main river, any fish suspended is a tough target and these are just exactly that. By relying on good electronics anglers can position themselves and make a proper presentation by casting up current and allowing their bait to fall into the face of the fish.

Another great option is to fish with a heavier jig or swim bait and fish vertically or by slowly trolling, freshwater anglers refer to the technique as "strolling." The tried and true method of fishing live bait scores some big fish as well and live mullet, shad, or crawfish are tops on that list. All the techniques mentioned will catch big wintertime stripers but the most exciting has to be the topwater plug. Stripers will occasionally school and break the surface making them ideal targets for surface pluggers. The strikes are violent. Dickie Colburn and I found the stripers mixed with speckled trout one day under the birds in the Sabine River of all places. All the trout were solid but the stripers stole the show as they peeled drag and gave great fights. Stripers love low-light conditions so the crummiest overcast days play right into their hand as they prowl around looking to ambush their next meal. I have spent some great days in less than desirable conditions with a smile on my face as stripers crushed my lure. For this time of the year there are few fish I would rather chase and still fewer who fight as well as the stripers do.

The striper and the black drum are not high on the "flashy" or "sexy" list but they rarely fail to impress those who catch them. The sheer size of these fish and the strength with which they pull can be a real eye opener, especially if you are one of those who dismiss these fish as inferior or not worthy of your time. I, along with a whole host of other anglers will be glad to tell you how much fun and challenging these fish are to catch. They are a tremendous option and alternative to the species you target every day and can certainly provide plenty of excitement. In the coming weeks if you are looking for a challenge, do yourself a favor and check out winter's 1-2 punch of black drum and striped bass, they just may surprise you.