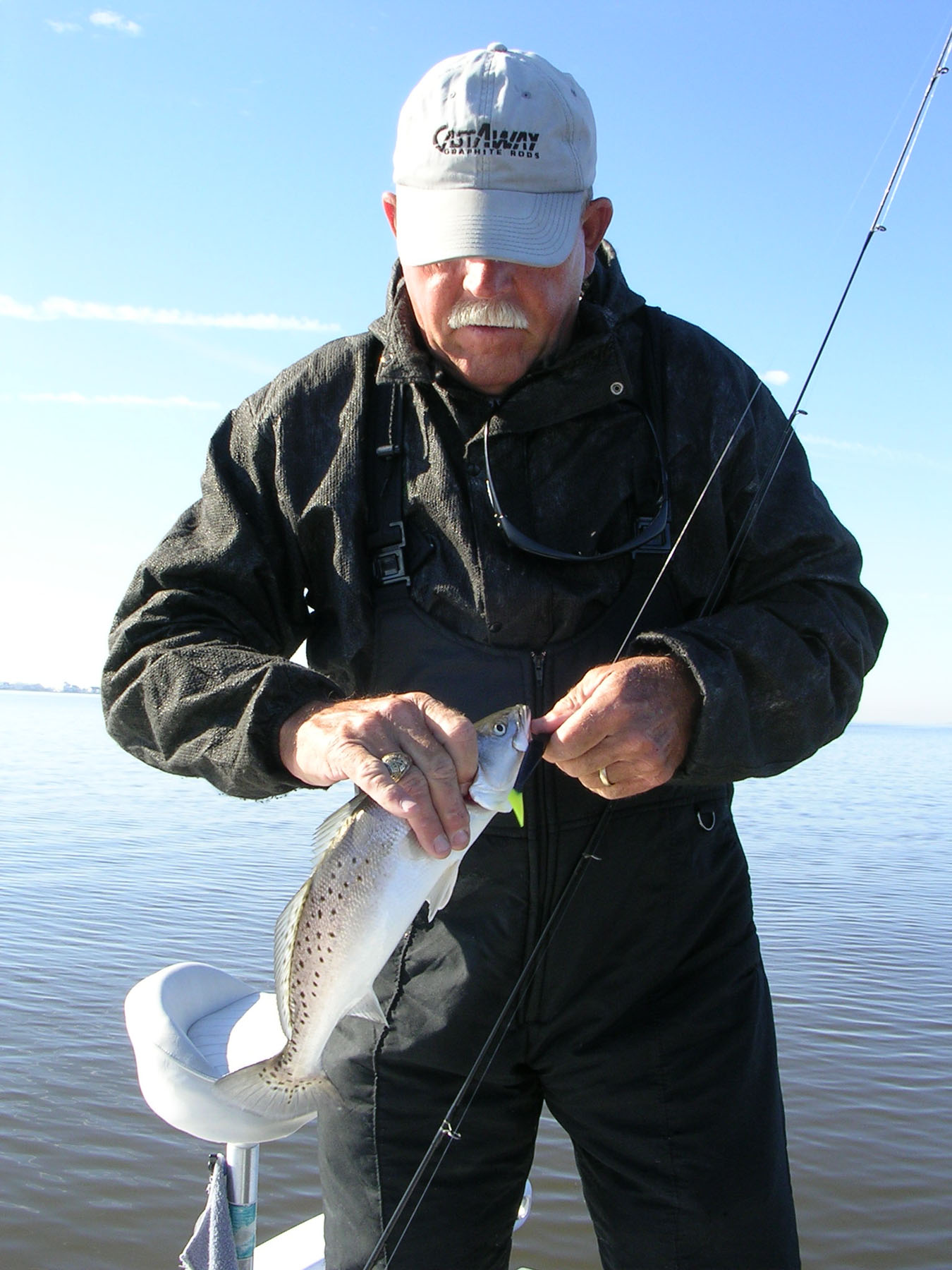 Capt. Dickie Colburn with a solid trout from some deep Sabine shell.
You never know where or when it will happen, the lightning strike that is a big fish, the once in a lifetime hook set that could define your whole fishing career. I don't know anybody who has ever wet a line that has not dreamed of catching giant fish, the kind that visit you in your dreams at night. Right now is the time of the year that those dreams could come true for some fortunate angler either from the coast or an east Texas lake; spring is the right time to catch big fish and the best is yet to come.

For many weeks now both Dickie Colburn and I have been talking about the big trout being caught both here at Sabine and across the river at Calcasieu, that program is really getting ready to kick into high gear. The winter weather fishermen have had both of these bay systems all to themselves for some time now and as the mercury rises that luxury will go away. More and more anglers will take advantage of the warmer temperatures and get out on the water. More anglers mean more opportunities to catch fish, warmer temperatures mean fish will be much more active for longer periods of time, couple those two together and you have the recipe for a tremendous spring.

As the water temperatures climb up into the mid 60's and above we will see the topwater bite crank up with a vengeance. Up until now the topwater bite was hit or miss, warm afternoons provided the best opportunity for a surface assault from a big trout but it was never a certainty. Try as one might, it was difficult to hold your focus long enough to coax a strike from sluggish fish on topwater while your buddy was catching on sub-surface plugs. The tides will soon turn and the angler chunking topwater plugs will even the playing fields, maybe even actually have an advantage when you come to think of it because of their ability to cover more water. Don't be surprised if you start seeing some of the biggest fish of the year show up.

So far this spring the "Most Valuable Player" in my tackle box has been a plug called a Tide Minnow and it's made by a company called Dulamar. I ran across this plug at one of Shallow Water Fishing Expo's in Austin and it has really done a job for me this spring. I like everything about the plug, the finish is first rate, the hooks are high quality, and it just flat out catches fish. We have spent the majority of the past month in water from 2 to 4 feet and this little plug really shines under those kinds of conditions. For those unfamiliar with this plug it's a shallow running jerk bait that can be worked with various retrieves and that makes it an easy lure for even beginners to use. I wrote about this style of lure in the February issue and I can't help but mention them again, especially when these baits have been producing like they have for both customers and me.

Looking ahead to the coming months we can always expect some less than desirable winds and unpredictable conditions. For many anglers this means sharing protected water with the masses since everyone will want get out of the wind. When this happens to you and the crowds get tough, get out and explore some different and less pressured venues. Anyone who has read this column knows I have a great love for fishing deeper water than most, and at this time of the year that program can pay big dividends. Spring time on Sabine is tailor made for the deep water pattern. We are famous for the "dredging" technique that has become a staple for local anglers. Long drifts over oyster reefs in water from 3 to 25 feet have produced a ton of fish for those anglers who take the time to figure out the proper combination of lure color, speed, and depth. I can't tell you how many times I have seen waders come in from a long day with an empty stringer while just minutes from the dock the herd of boats along the causeway reef have just had a field day catching trout. No, the deep water dredging technique is not glamorous, but it sure does work if you give it a chance.

Hopefully the next month will be fisherman friendly because the water conditions along the Texas coast are prime right now; it will be wide open crazy before you know it. I hope each one of you get the chance to take that big fish of a lifetime we all wish for. I also hope when you do catch that trophy that you respect the resource and take only the fish you can use and release the others to fight another day. Good luck, see ya on the water.