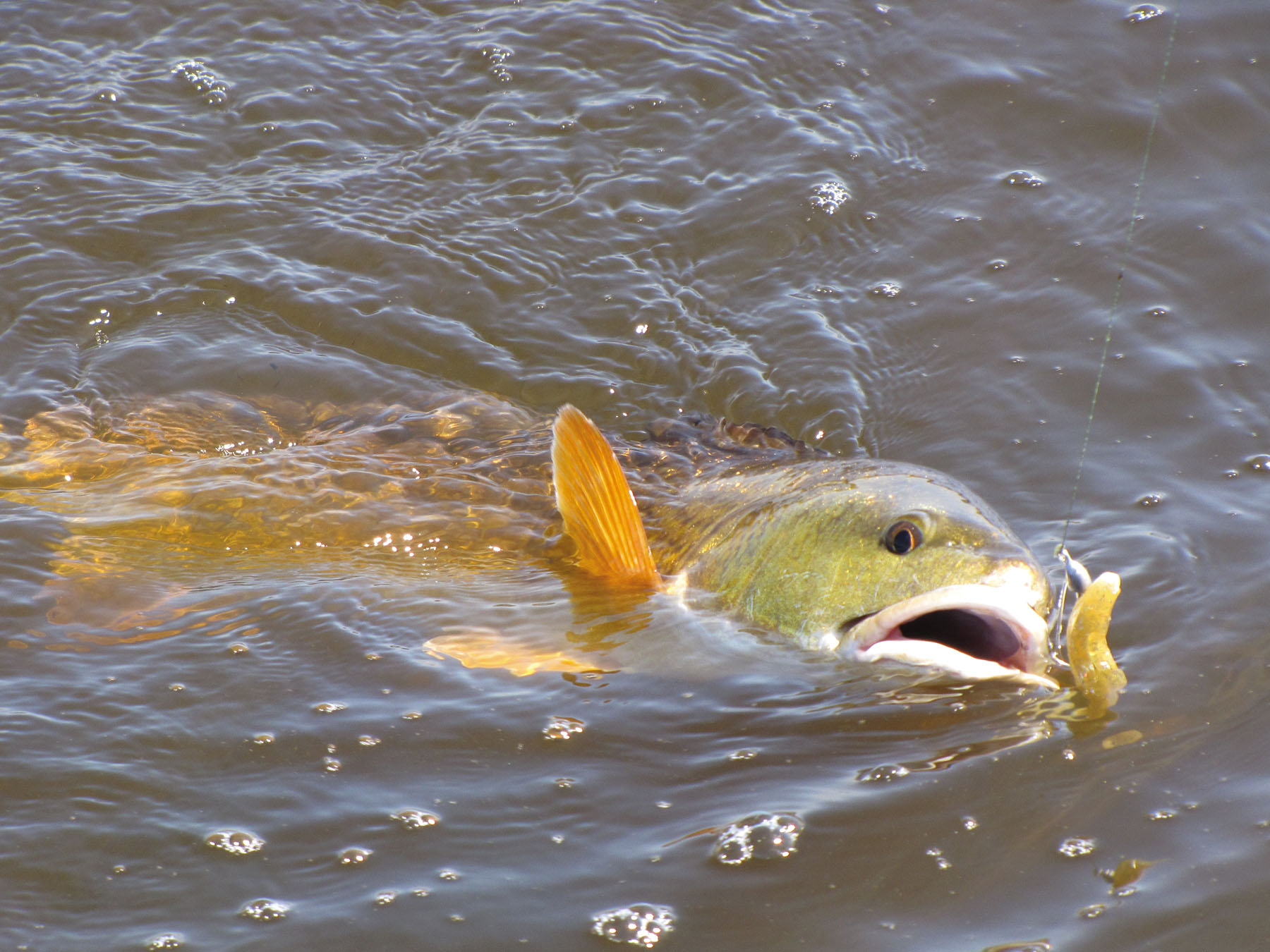 The sound of the garage door opening broke the silence as I stood there surveying my personal weather station. You know, the one we all use to determine whether the TV meteorologists are worth their salary. I looked up at the trees and judged the wind, not a leaf rustling. The temperature was ideal, just warm enough to let you know winter was in the rear view but still a long way from the meltdown days of summer. All the variables pointed to a day with plenty of potential, I would do my best not to waste the opportunity.

With my little skiff in tow I eased down the road and got a feel for the water level as I crossed one of the many bayous that run through town. The water was a little lower than normal and that would certainly help my shallow water program by concentrating the redfish. Things were definitely shaping up. The final piece to the puzzle was my angling friends for the day, Howard Watson and Steve Guynes, two very accomplished fishermen who I enjoy sharing my boat with. As a matter of fact Howard was my very first client I ever took fishing and over the years he has become a great friend to not only me but my family as well. His passion for chasing fish on light line is matched by few and he has fallen in love with fishing the Sabine area. Today we are going to probe the marsh for redfish and each of us is looking forward to the adventure.

The morning starts off full of promise as our first destination proves to be a perfect starting point. Several fish make telltale mud boils and push healthy wakes as they make room for us in the pond. Both Watson and Guynes start the day off with topwater plugs just knowing a surface eruption is right around the corner. The sun is now creeping up past the horizon and the temperature is perfect. The added light makes spotting the fish much easier and we all begin to pick out fish. For whatever reason the redfish ignore the surface offerings and remain tightlipped causing us all to scratch our heads. A new game plan is put in play. A weightless soft plastic draws the first strike as Watson's rod bows and a heavy redfish puts on a show steadily taking line. For that moment all is right with the world.

The redfish eventually comes to the boat and just as we suspected it's a toad, a solid twelve pound fish that stretched the tape to 32 inches. A few quick snapshots and the fish is released unharmed. That episode would repeat itself several times during the course of the day; quality fish that had shunned the topwater plugs would readily inhale soft plastic offerings. No, the strikes did include the visual reward but the results were the same and for the most part that's all that really counts when you think about it.

Too many times we get too caught up in how we do something, the "live versus artificial" debate is the first thing that comes to my mind on the subject. "Fly versus conventional tackle" is another battle that makes zero sense to me. Begrudging or belittling the angling accomplishments of others because it's not your way is a little much on the "holier than thou" scale, isn't it?

As fishermen we all want one basic thing, a pull on the end of our line. Some want a bigger pull. Some want a bunch of pulls. Regardless of how you go about it we all want the pull and that makes us all basically the same. Some of the most fun trips I have ever been a part of occurred when anglers who were way up on the skill chart took time to go back and do something less complicated. Watching guys who made their name winning tournaments and perfecting techniques that would drive the average angler nuts reverting back to things they did when they were kids can be a treat. To see guys in a tournament boat that resembles a NASCAR racer anchored up pitching live bait or dragging a cork is as refreshing as the laughter that inevitably follows. To simply fish and have a good time is what this whole sport is about and we should never lose sight of that.

The more I think about this the more I'm reminded of some time I spent in Mexico with TSFMag's own Mike McBride. Like typical Texas boys with good intentions, we had gone down to search a virgin area of the Yucatan full of tarpon and snook armed only with the tackle one would carry on a long wade. The fish were there but uncooperative. As we exited a small lagoon and drifted across a deep flat we found an abundance of speckled trout and watched local fishermen catching them on hand-lined live baits. Well I'm sure you can only guess what happened next, we forgot all about the tarpon and snook only to concentrate on the trout. We got some strange looks from the other fishermen as we cast our soft plastics and caught trout at a steady pace only to release them. Both Mike and I laughed at the whole episode and at ourselves. We had traveled hundreds of miles in search of trophy fish of a different species and here we were giddy at the fact we had found school trout. Like the old saying, to each his own... we had found our own and were enjoying it to the fullest.

As summer creeps into the picture there will be plenty of opportunities for you to try different methods of fishing and at various times they will all produce fish. If you are willing to have an open mind about techniques and styles you might be surprised at what you may learn and how much fun you can have. Be open to new ideas and see just how much better a fishermen you may be able to become.