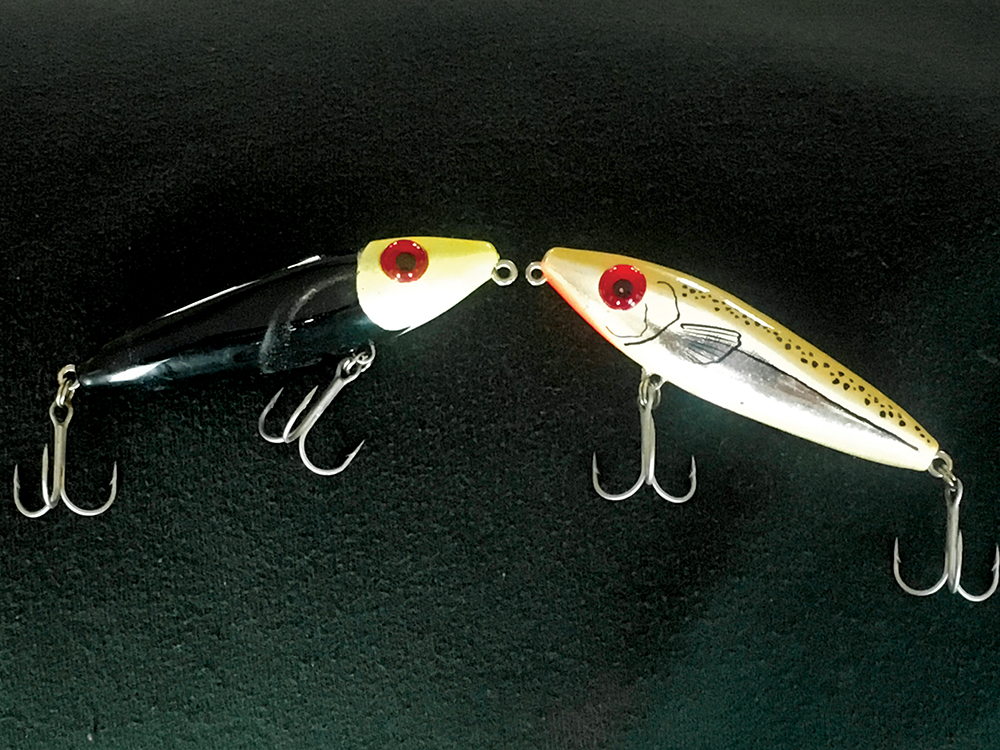 Top pick in the surface lure category goes to MirrOlure’s She Pup.

Without a doubt, one of the best things about fishing with new people are the conversations that occur throughout the day. Wide ranging topics from politics and sports to religion and food are cussed and discussed with some good-natured trash-talk thrown in for fun.

I had a client ask recently, “If you were limited to fishing with only five lures, what would they be?” I must admit that one twisted my brain a bit. Every time I thought I had my choices locked down I’d come up with others to consider. After much deliberation, I think I finally came up with my personal Fab Five. My disclaimer will be that this list is good until I change my mind.

There is no way I could ever compile such a list without mentioning the Rat-L-Trap. My first taste of saltwater fishing when I was a kid centered solely around this ultra-versatile lure as I probed the shorelines of the Sabine River and ICW looking for redfish. The standard 1/2-ounce Trap in chrome or gold is a proven producer for just about anything that swims. It can be presented in a multitude of ways, from standard cranking to vertical jigging along jetty rocks. The ability to cover large areas of water with bullet-like casts allows fishermen to eliminate water and find fish quickly.

The Trap really shines on schooling redfish hanging below small trout, cleaning up scraps as the specks shred bait near the surface. Maybe it’s the wiggle or maybe the rattle, whatever, it draws vicious strike after strike from copper brutes. If the Trap has a downside it would be the tendency of its small trebles to hang in landing nets. But hey, that means you’re catching fish.

Next on my list is generally from the soft plastic category. A difficult choice considering there’s at least a million of them. My nod for top spot goes to the TPE Manic Shrimp by Savage Gear. A little unconventional to some, so let me explain. When most folks think of soft plastics they think rattails and paddletails on jigs. But through a wide-angle lens the Manic Shrimp covers a lot of bases – bouncing bottom for flounder, dangling under a cork, freelined with the current – it catches fish however you present it.

The Manic Shrimp comes in several models, pre-rigged on weightless and weighted swimhooks. I have yet to find a bait that matches the production and durability of this shrimp lookalike, and it’s just crazy how long they last. Seldom do I ever leave the dock without having at least one rod rigged with this great little bait.

My next pick was a staple in every tacklebox twenty-five years ago, yet I doubt many of today’s under-40 crowd have tied one of these old-school stickbaits on their line. Rapala currently calls it the Floating Original and there are many lookalikes, in more colors than anybody will ever need. A floater at rest, the lip enables it to dive below the surface and it performs exceptionally well in 2- to 4-foot depths. Very user-friendly, meaning all that one really needs to do is cast it and wind it back. I often use the Rapala in situations where I have folks on my boat who are not comfortable with suspending lures such as a Corky and Corky Fat Boy.

Cranking it deep enough to bang shell and then pause for just a moment will produce jarring strikes from quality redfish and speckled trout. The added bonus is that if you hang in shell and break off, it often floats back to the surface where it can be easily recovered. I am a big fan, given all the options it offers while so easy to use effectively.

Now we get to the easy stuff – surface lures. Looking back at past trips, I noted a pattern of steadily working my way toward the MirrOlure She Dog or She Pup. Don’t get me wrong; I love to throw Super Spooks, Skitter Walks, and Chug Bugs, but this MirrOlure duo just flat produce for me. The raucous high-pitched rattle can definitely draw an outsized share of strikes.

On Sabine and Calcasieu we tend to drift deeper water than our counterparts to the south, and the signature sound of these plugs helps summon fish when the pattern calls for it. If I was pressed to pick between the She Dog and She Pup, I would lean toward the smaller version as it performs for me in more situations. The smaller size works great in super clear water when you need to downsize and it still has enough bulk and noise to catch fish when clarity is less than desirable. The only detracting trait of the Pup is that redfish and larger trout will inhale it so deeply that extraction can be difficult. Both the Dog and the Pup are top choices for me when I’m scratching the surface looking for that big explosion that keeps you coming back for more.

The fifth and final member of my five lure arsenal came down to a photo finish, so I guess I’m going to have to bend the rules a bit. One of these is probably more useful to the general fishing public so, I’ll call it 5A and the other will be 5B.

H&H Tackle Company’s Usual Suspect swimbait is a definite winner and my 5A pick with its big thumping paddletail that can actually be felt through the rod during the retrieve. A dinner bell for fish on Sabine if there ever was one. It comes in a rainbow of colors in 3-inch and 4-inch sizes with beefy hooks and will do a number on trout and redfish in the open lake. It also shines when probing deep water. A great shad imitator.

So we’re down to 5B, the distinction I award to the Stanley Ribbit, perhaps my all-time favorite lure for catching shallow marsh redfish and largemouth bass. I turned to this lure years ago to help combat grass that choked marsh ponds to the point of unfishable with other lures. Rigging the Ribbit weedless on a wide-gap 5/0 hook allows you to fish it through practically any vegetation situation. Run it like a buzzbait on a constant retrieve or work it erratically like a topwater. This frog imitation really comes into its own when sightcasting to redfish, they simply cannot ignore those floppy legs. The multitude of presentation techniques combined with explosive surface strikes assures it a reserved seat in my tacklebox.

So there’s my list. I would be crazy to think that everyone will agree with these choices. They definitely reflect my favorite ways to fish my home waters, yet I look forward to hearing thoughts and comments from TSFMag readers. If nothing else, consider what I’ve had to say and how you might be able to apply it to lure selections in your own waters. One thing’s for sure, there is no right or wrong in anybody’s favorite lure list, only new ideas and useful alternatives.