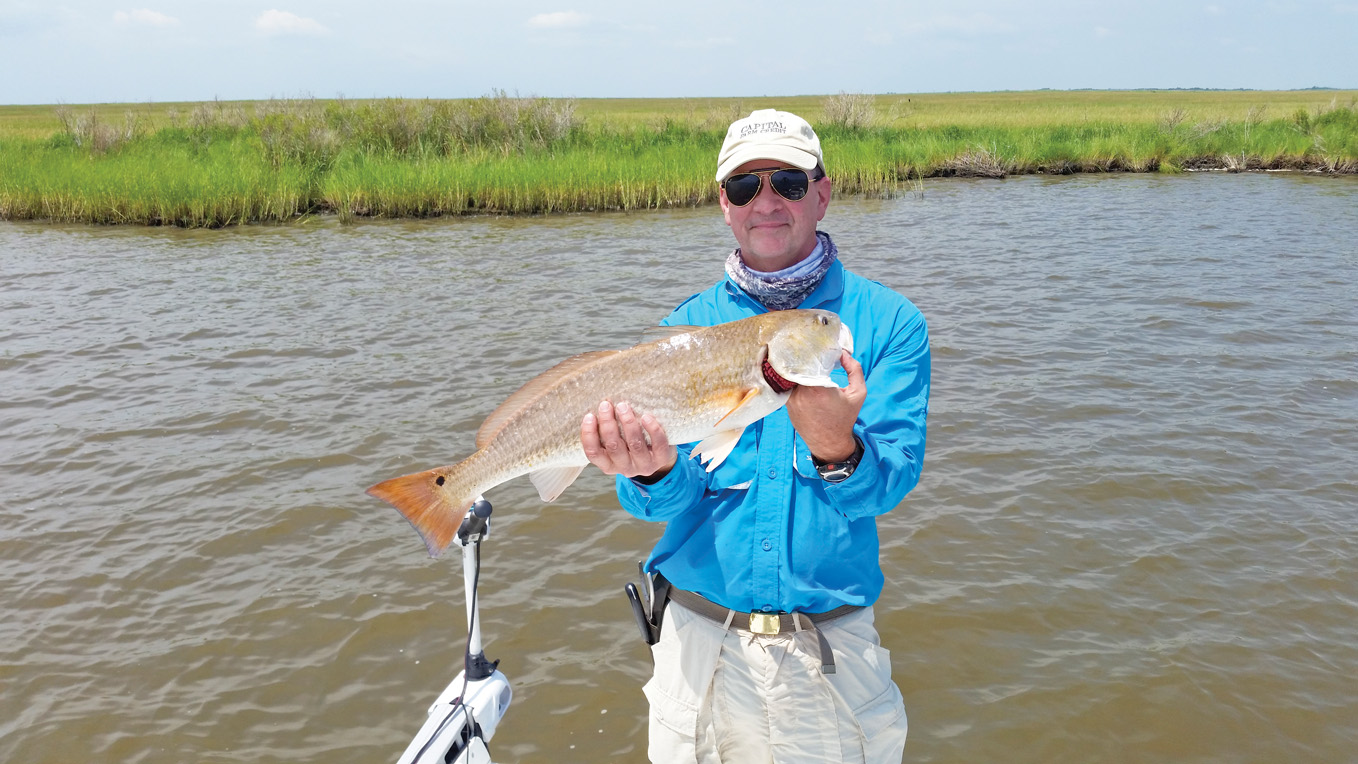 November is always special in the Sabine marshes.

During the late-70s heyday of Saturday Night Live, actor Garrett Morris portrayed a memorable character based on a fictional Dominican baseball player named Chico Escuela. With thick Spanish accent, Chico would say, “Baseball been berry, berry good to me.” Well, if Chico was a fisherman he would probably feel like I do about November because over the years it’s been “Berry, berry good to me.” The month of November offers perhaps the best overall fishing of the year on Sabine and Calcasieu from top to bottom, in my opinion, so if I seem a little bit excited about the prospects this month you’ll have to forgive me.

My first experience with November fishing was enough to get me hooked for a lifetime and for that I am beyond grateful. As a teenager I spent countless days on the Sabine River patrolling the banks with crankbaits in search of redfish. The basic game plan was to catch the lowest tide on those cold winter days and cover as much ground as possible. Hundreds of casts and empty hours were soon just an afterthought when a thick shouldered bully of a redfish inhaled my Rat-L-Trap and proceeded to test my drag. It was borderline miraculous how warm you suddenly felt when a fish struck, those numb-clumsy fingers were replaced with the nimble digits of a concert pianist. Most of those redfish were just bulging full of crushed crabs and mullet after they had probed endless stretches of shorelines and marsh drains. This pattern really gets started in November and continues all through the winter months. A bonus to this method was catching the occasional striped bass, some of which were as large as 30-pounds. The stripers have all but vanished since hurricanes Rita and Ike but I still hold hope a few stragglers will show up one day.

As you move downriver towards the lake, both your focus and strategies begin to change. The open water will be filled with schools of hungry speckled trout and redfish being covered by squawking flocks of gulls and terns. The frenzy taking place in the air will be a dead giveaway to any angler paying attention to their surroundings. The potential to catch a fish on every cast is far too inviting for most folks to pass up, which means boat traffic and fishing pressure can be a little over the top - especially on fine weather days. However, the pressure will diminish to almost zero on the colder, less hospitable days, as only the hardcore anglers tend to brave the elements and reap the rewards.

Sabine and Calcasieu are unlike most other bay systems along the Texas coast during November as the quality and size of the fish under the birds can be quite impressive. Other bay systems, for whatever reason, tend to produce only undersize to barely legal fish under birds, while on Sabine it’s not uncommon to find trout to 5-pounds and even heavier. The overall quality of the fish is truly impressive and one reason that folks look forward to this time of the year.

Now if jockeying around with the crowd is not your idea of a pleasing day on the water, there is another option that pays big dividends to those willing to literally turn their back on the sure thing under the birds. Wading the shorelines in November, especially those near deep water, can often produce the biggest trout of the year. Easily one of my favorite patterns is catching an afternoon incoming tide when the banks have been exposed to the sun all day. Those banks, particularly mud rather than sand, will hold heat that was accumulated during the day and act like magnets to both bait and predator fish. The temperature difference sometimes is enough to turn those fish on and provoke them to feed aggressively.

More often than not, that window of opportunity is small, maybe 30 minutes or an hour at most, but is well worth the effort to get there because it can be downright magical at times. One other advantage is that warmer water and specific areas will concentrate fish in surprising numbers. I have seen small areas, smaller than a swimming pool, holding large numbers of really good fish.

For example, at the mouth of a drain that empties into Sabine, clear warm water that has been held up in the marsh begins to empty out into the lake carrying with it plenty of bait. At the flat where this water enters the lake, perhaps one of the best groups of big trout I have ever seen set up shop and provided my group a most memorable hour, and my personal best fish ever on Sabine. I could not have ever imagined that many fish could be in such a small area, it was amazing. The area in which you had to cast in order to get bit was well defined and, if you missed, even by e few feet, you may as well have been casting on the moon because that water seemed to be barren compared to the “sweet spot.” I still have fond memories of that late afternoon trip.

The endless options that make November such a wonderful time of year offer something for everyone. We are so very fortunate on Sabine to have all these quality options for nearly every situation that the weather can throw at you. Knowing you have a viable program no matter the weather situation is comforting as it increases your days on the water and could possibly provide you with that trip or fish of lifetime.

On a personal note I would like to thank everyone who helped or volunteered during the catastrophic storms associated with Harvey. I also appreciate all the calls and texts from folks checking on me and my family – it sure meant a lot. I was fortunate to have narrowly escaped the flooding at my home and took that opportunity to go help out as much as possible. My son Hunter and several of his friends spent a few days running around extracting folks from their houses and carrying their belongings to dry ground.

I actually had to go get my mom, stepdad and little sister out of their home in Bridge City as they were still dry but surrounded by water and without electricity. The standard house “gutting” where you remove sheetrock and soggy insulation went on for more days than I care to count but I was glad to help those who needed assistance. I hope that situation never happens again for any of our neighbors here or along the coast.

It’s going to take quite a while, if ever, for the Texas coast to get anywhere close to what we might call normal before Harvey. In the days ahead it will be a struggle for some folks, so if you get an opportunity to help, please do. It will certainly be greatly appreciated.