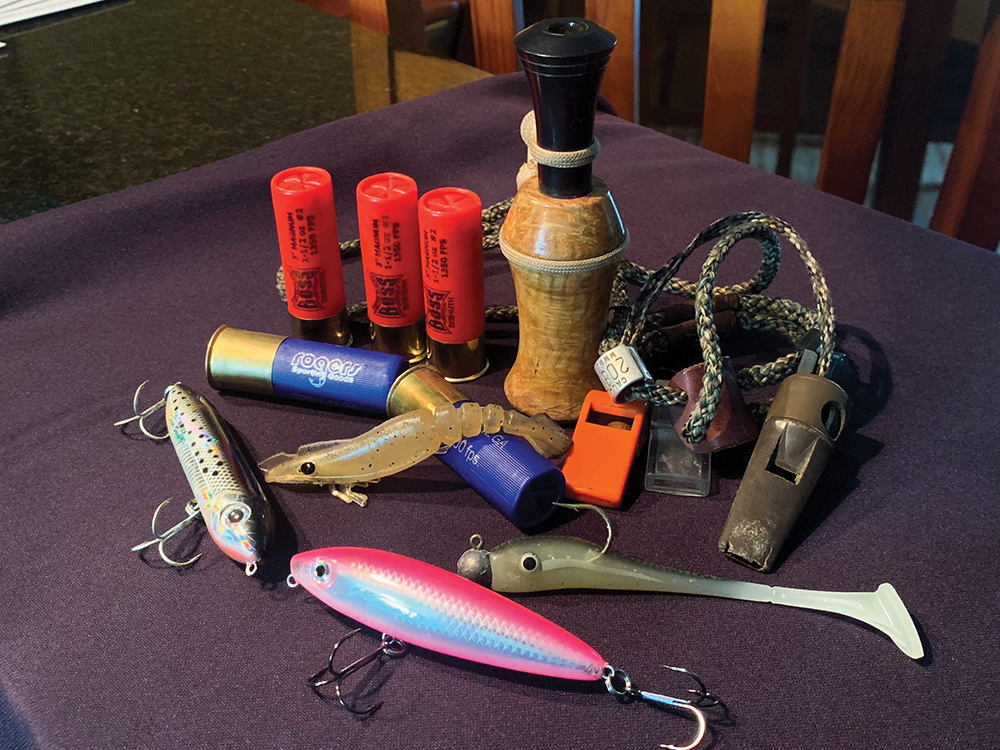 The tools of November…use frequently for best results.

During an average day on the water, a fishing guide ends up in conversations with people from all walks of life, each uniquely different in their own way, but very similar in many others. Inevitably, you end up discussing some of the same topics with just about everyone who boards your boat – how long have you been guiding – what’s the biggest fish you ever caught. These are always interesting, even though discussed many times with other folks on previous outings. When sharing my answers one day with clients, it dawned on me that I live in a repetitious and predictable pattern. Seasons tend to melt into one another and become a single extended event with many sub-parts.

Early on in my life I was horribly unaware of worldly events or anything that happened outside my little circle unless it involved the outdoors. Religiously, every Thursday and Sunday, I went to the corner store for copies of the Houston Chronicle, Houston Post, Beaumont Enterprise, Port Arthur News, Orange Leader, and Lake Charles American Press. Leaving the store, I promptly discarded everything except the outdoors sections where the writers of the day published their weekly columns.

These were the days before social media and outdoors television shows, and I lived vicariously through their words and exploits – Joe Doggett, Doug Pike, Shannon Tompkins, and TSFMag’s own Dickie Colburn put words on paper that meant something to me. Over the years I got to the point where I almost knew what they would write even before it was published because the outdoor world revolved around this big cyclical pattern.

January and February were boat shows and big bass while March and April were all about big trout, flounder, and crappie. May, June, and July meant saltwater in the form of jetty fishing and offshore pursuits. August and September started the transition towards hunting season as well as kicking off the fall fishing in all the coastal bays. October, November, and December were the cream of the crop as the Texas white-tailed deer season opened and both fresh and saltwater anglers were enjoying some of the best opportunities of the year. It was an amazing cycle that still holds true to this day and still captivates the outdoors enthusiast in all of us.

Well, here we are again at that point to where it all comes together and gets beyond good. November is upon us and I personally love this month for all the opportunity it offers. Opportunity is the key word because there is plenty of it.

As mentioned above there are a virtual ton of things to pursue outdoors and that means that the crowds on the bays will thin noticeably as folks pursue their various passions. Fewer folks on the water competing for fish is a win in my book. October can be one of the worst months as far as crowds go. The weather is pleasant and everyone is fired up to get in on some easy fishing as flocks of gulls wheel and dive over schooling fish. General courtesy and manners tend to go out the window for a few weeks as the crowds converge on smaller bodies of water like Sabine and Calcasieu. These bays can get small in a hurry when the numbers of anglers go up in proportion to the tempo of the bite. The silver lining is that it generally only lasts a few weeks until hunting season calls them away.

November on Sabine is what Dickie Colburn likes to call dealers choice because you can do so many things and none of them are wrong or unproductive. Top of the list for many anglers will be the fall flounder run that has long made Sabine Lake famous. Flounder will begin to migrate out of the marshes and funnel through the passes making them easier to target. Generally speaking the biggest fish of the year are caught at this time and it’s not uncommon to see specimens of five and even seven pounds. The big spawning age females that tip the scales this deeply receive a bit of a reprieve in that the daily bag limit in November is reduced from five fish to only two, to promote escape to the spawning grounds in the gulf.

The next hottest ticket in town will be schooling fish, both trout and reds, under the birds. Sabine and Calcasieu both will often have schools of really solid fish show up under the birds, unlike some of the bays farther south along the coast where undersized and barely-keepers are the primary fare. I know many folks from Matagorda on south that rarely stop to fish under diving gulls because they seldom catch keeper-sized fish, whereas Sabine and Calcasieu anglers often find trout of two- to four-pounds, and sometimes larger.

Over the years I have seen some legit trophies taken under flocks of screeching gulls. Several years ago I had clients catch back-to-back seven-pounders under birds on Calcasieu, and I know of at least one legit thirty-incher caught from amid a of herd of redfish under birds on Sabine. It’s a phenomenon that doesn’t happen everywhere but I’m glad it happens here in my backyard.

Now if chasing the birds is not your cup of tea then you are still in luck as some of the biggest trout of the year will be caught by waders targeting these trophy fish. I personally like November better than the colder months of January or February for big fish here on Sabine. The primary forage, shad mostly, is incredibly rich and abundant, and they add weight quickly as soon as the water temps begin to cool. Perhaps one of the best things about chasing these fish in November is the fact that you can always hop back in the boat and go hustle some fish under the birds if you can’t find a big fish wading. Nothing like having a solid back up plan and this certainly qualifies as a good one.

I must admit I’m a little partial to November. The biggest trout I ever caught on Sabine was in November, so it’s understandable why I have such an affinity. I have spent some very memorable days wading the big flats behind the islands on the north end of Sabine that border the Intra-Coastal Waterway. Some truly big trout as well as plenty of stud redfish tend to gang up in that area during the latter weeks of the month and if you find one there are usually more around. The day I caught my best trout on Sabine I stood my ground and was amazed at how many were seemingly just lying within a space the size of your average backyard patio. What an eyeopener!

Now there are even more patterns you can enjoy that we haven’t mentioned; including the deep waters of the Sabine and Neches rivers, as well as the outstanding freshwater bite that will take place. Your options this month and beyond are plentiful and, historically speaking, some of the best we will see all year. November rarely fails to deliver and hopefully that will again be the case in the weeks ahead.