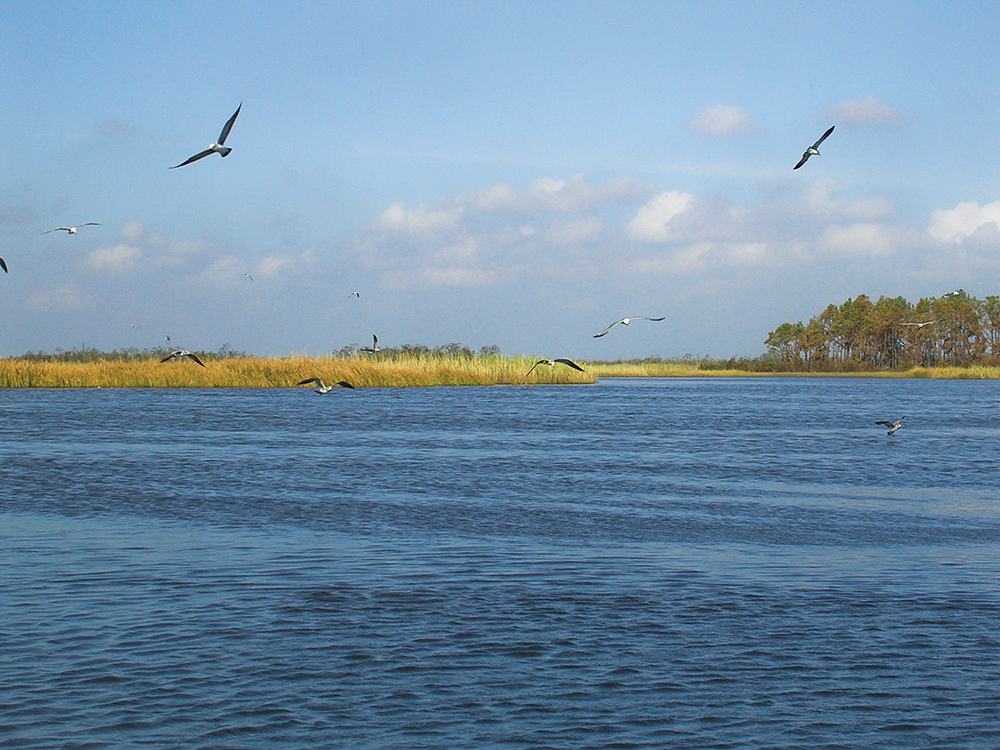 Swarms of gulls will point the way to great fishing this month as shrimp migrate from area marshes.

The sun has just broken the horizon to illuminate a relatively smooth lake surface, the temperatures are mild and the forecast is in the anglers favor. A short boat ride into the wide open expanse of Sabine is stopped so one of the anglers in the boat can search the area with binoculars in hopes of finding a set of working birds. The glassing pays off and the boat of hopeful anglers speed off in the direction of the birds with visions of speckled trout busting shrimp racing through their mind.

The boat driver pulls back on the throttle, kills the motor, and steps up on the bow to drop the trolling motor so the boat can be positioned quietly for everyone onboard can reach the fish. Just as our anglers reach the perfect distance from the flock it happens. A familiar roar comes from several directions and the perfect scenario is about to go wrong in a big way. Within minutes our anglers are surrounded by a half dozen boats and some very zealous anglers.

The wakes from the boat traffic turn the calm surface into a series of rolling swells. The birds and fish, surrounded by an armada of boats sometimes banging gunwales, shut down and suddenly disappear. The hopeful anglers scratch their heads – where’d they go?

This scenario will play out many times as overanxious anglers fail to learn from their mistakes and continue to turn what could have been a memorable day into one of frustration and only a few fish.

Now if the truth were really known, most anglers have been on both sides of that situation, we’ve likely all been both the victim and villain. It’s tough for the average fisherman to have the patience to come into a situation like the one described and not get antsy or in a hurry. All it takes is one boat to start crowding the school or moving too fast and, before you know it, the whole herd is in stampede mode.

That guy’s not beating me to the fish – OR – If we don’t get there first we won’t get a shot at the fish, are remarks that fisherman often make. But the fact is that’s not the truth at all.

If anglers would come off plane earlier, circle widely and approach from the upwind side, use more trolling motor, and work with other boats instead of against them, everybody would catch more fish.

If you want to see a look of surprise on somebody’s face, just watch another angler when you ease up to a school of fish and ask them if it’s alright to fish near them. Most people are floored that anyone would even offer to do that. And I promise you, if you ask politely and use common sense, on the next bunch of birds that angler you spoke to earlier will do the same for you. Courtesy is contagious.

As good as the fishing gets during the fall you can certainly expect increased traffic on the lake from both local and out of town anglers. The last thing you ever want to happen is to have a confrontation with someone while you are on the water. I have witnessed some very heated moments on Sabine, there have even been some altercation at the boat ramp if you can believe that. There is no fish out there worth that kind of behavior.

Please remember a few simple rules while chasing the birds; approach slowly, be mindful of your wake, make a good effort to find your own flock of birds, work with other fishermen, and by all means keep your cool. Follow these simple rules and you should be on your way to a memorable day on the water.

Now that we’ve covered the common sense portion of this lesson, let’s talk about the mechanics of finding and successfully fishing a flock of birds working over a school of aggressively feeding fish.

First, take a few minutes to determine the direction the school is traveling and get in front or alongside of them. Believe it or not I often see fishermen trying to work the school from behind and this is a recipe for frustration at best, especially when it’s a herd of redfish on the move. Once you have the direction figured out stay just inside of your casting range in order to avoid spooking or breaking up the school. Getting too close or pressing these feeding fish is perhaps the biggest mistake most anglers make in this situation. By staying on the outer edge of the school you can follow them as they move and increase the odds of the school staying active for a longer period of time. It’s not uncommon to stay with one group of schooling fish for an hour or more if you don’t crowd them.

Easily, the best lure for fishing under birds is your favorite soft plastic on a single hook jighead. Grabbing a treble-hooked plug is asking for trouble. Treble hooks invariably end up tangled in the landing net, stuck all over the fish, and quite often during the excitement stuck in another angler on the boat.

I usually start out with a 1/4-ounce jighead and occasionally go to a 3/8-ounce model for increased casting distance. The 3/8 jighead will also allow you to fish a little deeper in the school which is often times where the best trout and redfish will lurk. Those smaller aggressive fish will mostly be found closer to the surface, so a faster sinking bait that gets under those small fish quickly will pay dividends.

Now after the schooling activity slows down, or even comes to a stop, don’t just take off in search of the next group of birds because you may be leaving too soon. I can’t count the times that I’ve watched other boats around me leave only to see those fish begin feeding again before those boat’s wakes have a chance to settle.

I believe what happens is the school of fish temporarily loses the bait they have been chasing and it takes a few minutes for them to herd it back up to the surface again. The angler who is patient and gives those fish a chance to gather up again may be rewarded with a school all to themselves while those other boats are leaving for parts unknown.

Some of these little tricks and helpful hints will certainly help you put more fish in your boat this fall. A little common sense and courtesy along with some fishing knowledge will go a long way toward insuring your success. Keep a cool head, a good pair of binoculars handy, fully charged trolling motor batteries, and a healthy supply of patience because it’s going to be a great fall season.