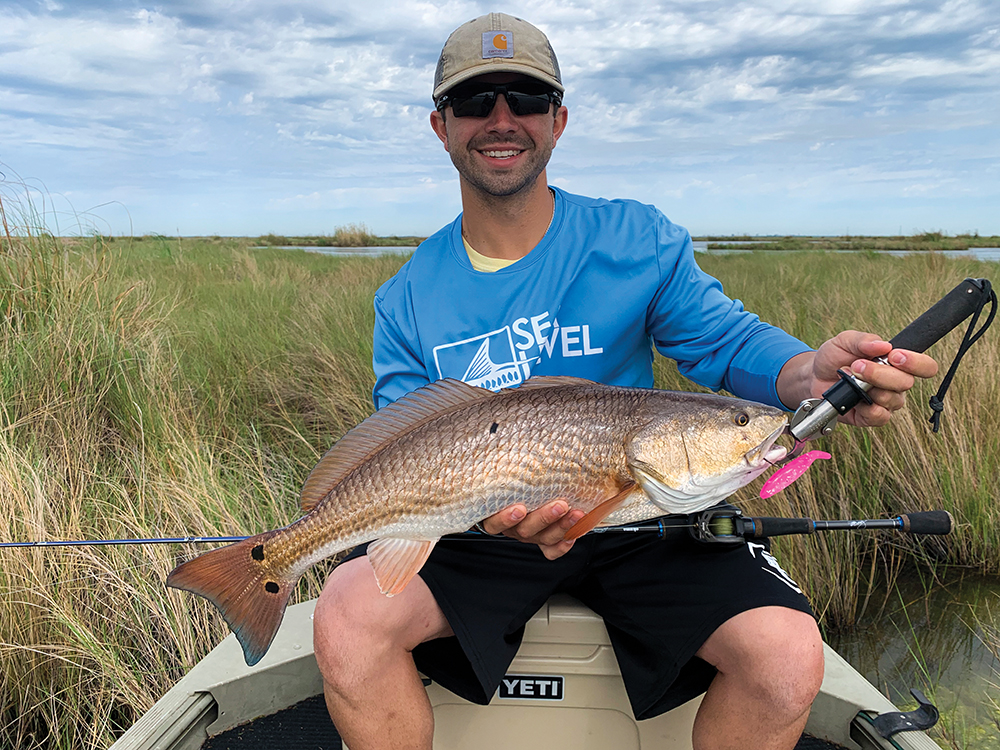 TSL's Grass Walker has proven to be a great option in thickly vegetated marsh ponds.

The ancient Greek philosopher Plato often receives credit for saying, “Necessity is the mother of invention. A need or problem encourages creative efforts to meet the need or solve the problem.” Considering all the possible applications of such wisdom, it would be easy to think that first, Plato could have been a good fisherman. Second, he probably should have spelled his name Plateaux, like the wise Cajuns when it comes to common sense.

The willingness or desire to figure out a problem has always been a fantastic trait to possess. Fishermen use this trait each and every time they head to their favorite fishing hole, only nowadays it’s called “finding the pattern or program.” Dissecting the variables in an attempt to catch more fish is a necessity, no two ways about it, but how far you are willing to go to accomplish that speaks volumes.

I feel fairly certain that at some point most of the anglers who read this magazine have encountered a problem on the water and have had to come up with a solution or better way to do something, namely catch fish. Fishermen are always toying with new ideas or ways to improve their odds in certain situations. Take for instance something as simple as adding sound to your baits. There have been all sorts of noisemakers incorporated into just about every style of fishing lure known to man, it seems. Glass worm rattles have been inserted into soft plastics and glued to hook shanks; beads have been threaded onto leaders above the knot on many lures and we even see them used with live bait. Adding such “clickers” is an obvious attempt to attract more fish and to get them to bite more often. And, as simple as they are, they seem to work in many situations to draw more strikes.

Now, as mentioned earlier, some anglers are more inventive than others, always seeking to improve lure performance or create ways to turn slow days into good ones. For me personally, I have learned to use several techniques more common in freshwater fishing than salt to catch fish here on Sabine. Perhaps my greatest adaptation and technique was using a plastic frog in the backcountry marsh ponds to combat the dense aquatic vegetation that thrives there. For years we enjoyed great success with the frog lures and we were still using them until something better came along. Enter a pair of true Texas inventors who have recently developed lures of their own designs that will no doubt change the game for many anglers, including yours truly.

Tobin Strickland of Trout Support and Josh Morris of Marker 54 lures have come up with a couple of lures that were each designed out of a necessity to fish their favorite waters more effectively. All I can say is that spirit and determination has paid off and Texas anglers will certainly reap the benefits for years to come.

Tobin Strickland is well known in big trout circles for his informative video series that absolutely dissects all aspects of chasing trophy trout. Strickland eventually tried his hand in the ultra-competitive world of lure design and hit a homerun with his Grass Walker. This bait was designed to combat both floating and bottom grass that plagues lower coast anglers at various times of the year, as well as providing a new angle on fishing potholes in the grass flats. The Grass Walker is a weedless soft plastic that is very durable and can be fished in a variety of ways from surface walker to slow sinker. I have fallen in love with the Grass Walker for chasing redfish and largemouth bass in our brackish water marshes. You can cast it a mile and being rigged in weightless/weedless fashion it can be presented softly to spooky fish in shallow water.

Josh Morris over at Marker 54 Lures really jumped on the scene with his highly-realistic shrimp imitators that move through the water like no other on the market. Josh just recently debuted his Mullet Run lure that is not only a gorgeous swimbait but its also scented with Pro-Cure, a cutting edge scent technology that is truly eye opening. The Mullet Run is packaged dry so you never have to worry about leakage or shrinkage. The plastic used in the Mullet Run is very durable for a scented plastic and continues to emit the Pro-Cure scent for up to one hour during use, which is way longer than other bait like it. The Mullet Run has already delivered excellent results for me on all the big three – trout, redfish, and flounder. The swimming action created by the tail design provides both visual and sound attraction that enable it to be a truly versatile offering. I am personally very proud to see these two Texas guys do so well and create baits that will give fisherman a leg up in solving tough bite problems.

Looking now into June, barring any natural disasters, we should (hopefully) be able to enjoy stable weather patterns and favorable water conditions. April and May each gave us some bright spots but they were few and far between for Upper Coast anglers. If there could be a problem we had it – high water levels to high winds, and just about everything in between. June tends to signal the beginning of a steadier pattern in the weather and hopefully the fishing.

Speckled trout catches have begun to improve somewhat in comparison to the same periods in 2018 and 2019 and that is great news. Still no really big trout showing as of this writing but quality and quantity have improved significantly over what we experienced in the dismal days of 2019. Redfish will continue to be active just about everywhere between the marshes and the jetty so many anglers will take advantage of that bite at every opportunity.

One word of caution as the water temps continue to climb, please take care to release those big redfish and be sure they swim off strong. In the hotter months these fish will require greater effort in reviving to insure they can swim away strong and healthy for the future.