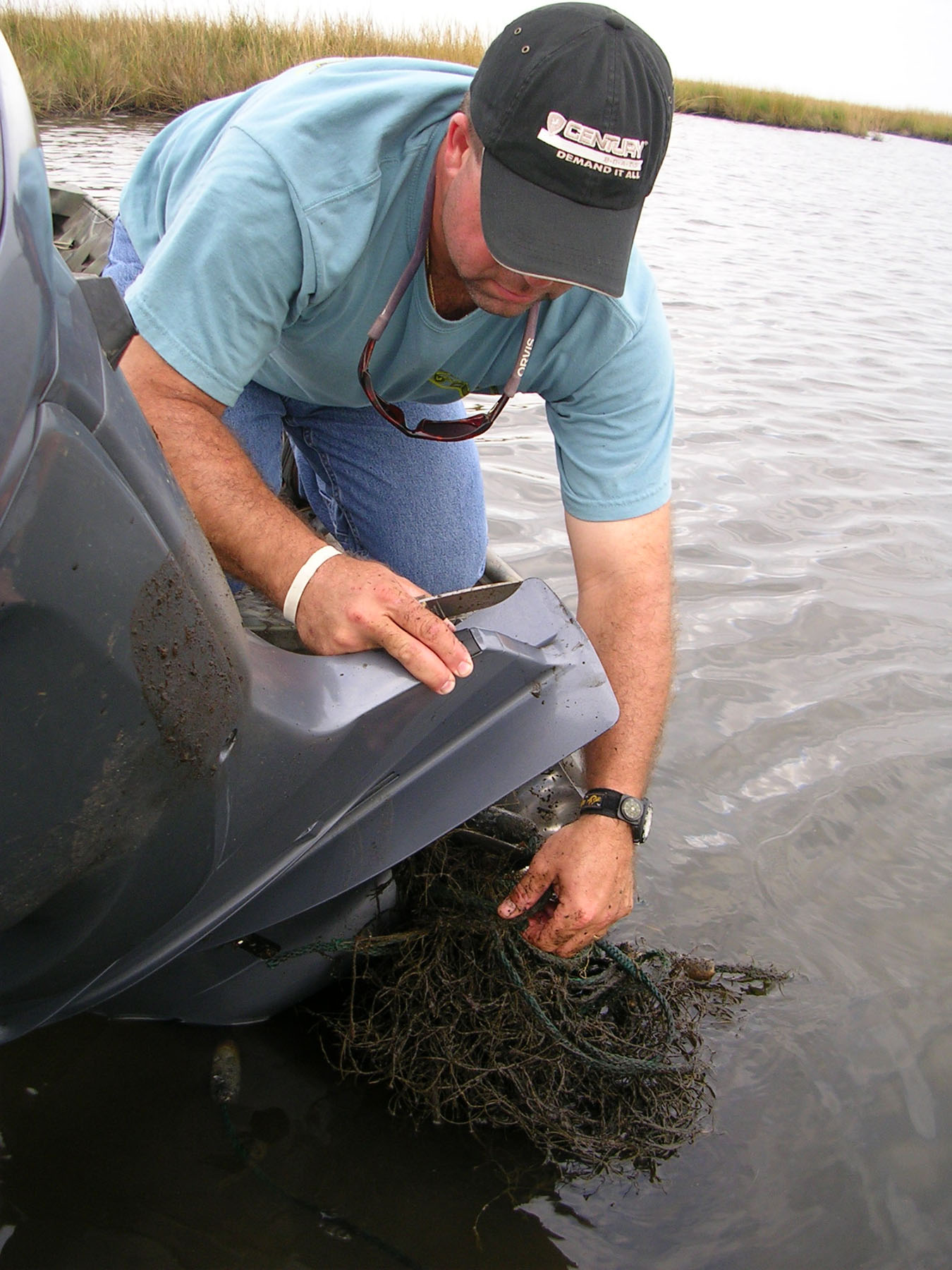 Gill nets still give anglers a fit as they kill too many fish and often cause motor problems when they tangle in the prop.
Many of us along the Texas coast who love the outdoors have long held the notion that there is Texas and 49 other states that are just along for the ride. The pride we show in our state is readily apparent as the Texas flag is probably the most recognizable state flag of all. Now for folks like me who live and fish is the shadows of two states it's a little bit different, I have a place in my heart that is near and dear to Louisiana and that will never change.

Louisiana is the self-proclaimed "Sportsman's Paradise" and it is just that, a virtual paradise for any outdoor-minded person. On Sabine Lake we spend a lot of time in Louisiana water as it's difficult to go anywhere without crossing the border. In recent years we have even taken to venturing farther east and enjoying what Calcasieu has to offer. For years I have entertained going even deeper into the "Bayou State" after reading stories that told how incredible the fishing and hunting could be. I finally got my chance.

I left the house loaded up with high expectations and one eye on the weather as an approaching cold front somewhat held my attention. The journey down IH-10 was familiar until I jumped off on Hwy-90 at Lafayette and drove southeast through one of the most gorgeous places on earth, the Atchafalaya Basin. Majestic gum and cypress trees lined the vast low area and everything seemed so ancient that one might believe they had stepped back in time. The swamp soon gave way to acres and acres of sugarcane fields and dark rich soil that just begged to be planted; I was mesmerized.

Soon came Morgan City and other towns that line the many rivers and the Intracoastal, places like Lockport, Larose and Cut Off. My final destination would be just outside Golden Meadow which is just outside of nowhere. This small town revolves around the fishing industry and it seems everyone has something to do with working on the water.

I pulled into Baison's Marina and waited on my ride to come pick me up . I walked around the parking lot listening to the local folks and I may as well have been in another country as the Cajun French language flowed like the tide and all I could do was smile. The Cajun culture is really special because these folks are very passionate about life, family and enjoying your time on this earth. It didn't take long to strike up a conversation with a local fisherman and before too long it seemed like we were old friends, people like this make places like Golden Meadow special.

After about a 15 minute wait a shiny new 22-foot Century center console slid up to the dock and Nickie Savoie stepped out and held out his hand with a warm greeting. Nickie is the head guide at Cajun Resorts and a former tight-end for the New Orleans Saints. Cajun Resorts is an amazing lodge nestled deep in the marsh and only accessible by boat so we loaded my gear and took off through a maze of canals and bayous that looked like you could catch a fish any place you stopped. The marsh looked very similar to Sabine only without the tall rosseau cane to block your view. The unobstructed view really gives you an idea of just how expansive this place is, it seemed to go on forever. The folks at Cajun Resorts lease 15,000 acres of pristine saltwater marsh that is just swarming with speckled trout, redfish and ducks. I felt like I had found a second home.

As we idled up to the lodge I got acquainted with some of the other guides and took a look around. My whole purpose here was for a Century Boat Company writers event where guides like myself would take various media folks out to fish and have a good time. Upon entering the lodge it was evident that a good time would be had by all as Poppy Duet and Miss Dollie were cooking up some wonderful Cajun cuisine.

After storing my gear I sat down with Nickie and some of the other guides and asked them a couple of questions concerning the fishing and I was pleasantly surprised at some of the things they told me. Many Texas anglers believe the Louisiana anglers keep way too many fish and that they are not interested in protecting their fishery, this is terribly false. Each guide told me they have their own self-imposed limits on most fish because they think it's better on the population. Even though it's completely legal to keep 12 inch trout in Louisiana, the Cajun Resort guides try to maintain a 14-inch minimum. Many of these guides spoke out in favor of some sort of limit change in the neighborhood of 15 fish at 14 inches.

I must admit I was very impressed at the level of concern these guys showed for the resource, it was a far cry from how Louisiana guides are normally portrayed. As a matter of fact during one outing I had a big gill net become tangled in my prop and I had to cut it out in order to run. Once the guides found out about the gill net on their property you could tell they were not happy. "We have been trying to catch all these illegal netters for some time" said Savoie, "these guys just can't be satisfied with catching fish, they get greedy and that's not good for anyone."

For the next several days we caught redfish and speckled trout on just about any imaginable pattern. Most of the guides throw live bait and that's usually cocahoe minnows under a small rattling cork. Mr. Gary, Wade, Toby, and Al can flat out fish and are super nice guys to be in a boat with. The guys on the Century Pro Staff including myself caught fish on everything from soft plastics and spoons to topwater plugs, it was incredible. The water clarity is much the same as Sabine or even Trinity for that matter because it's much clearer than you might think. The lack of bright sand or anything on the bottom to give you contrast leads you to believe that the clarity is minimal. Once you get to a place where there is shell on the bottom you get a better idea of just how fine the water really is.

Going to a new area is always an adventure and Golden Meadow certainly qualifies as an adventure. The hospitality and genuine goodwill is what makes the Louisiana lifestyle so wonderful and there is definitely something to be said about enjoying life that keeps these folks living long happy lives. The thought of waking every day to an unspoiled paradise would probably make me smile too.

Besides the fact that the fishing was so good I was really glad to be able to share with the readers of Texas Saltwater Fishing the sentiments of these people and maybe help bust some of the myths and stereotypes that Louisiana fishing guides often get labeled with. These folks are just as interested in doing the right thing as anyone in Texas and they let their actions speak. I left Golden Meadow and Cajun Resorts with a bunch of new friends and good memories as well as a new-found respect for some really good people.