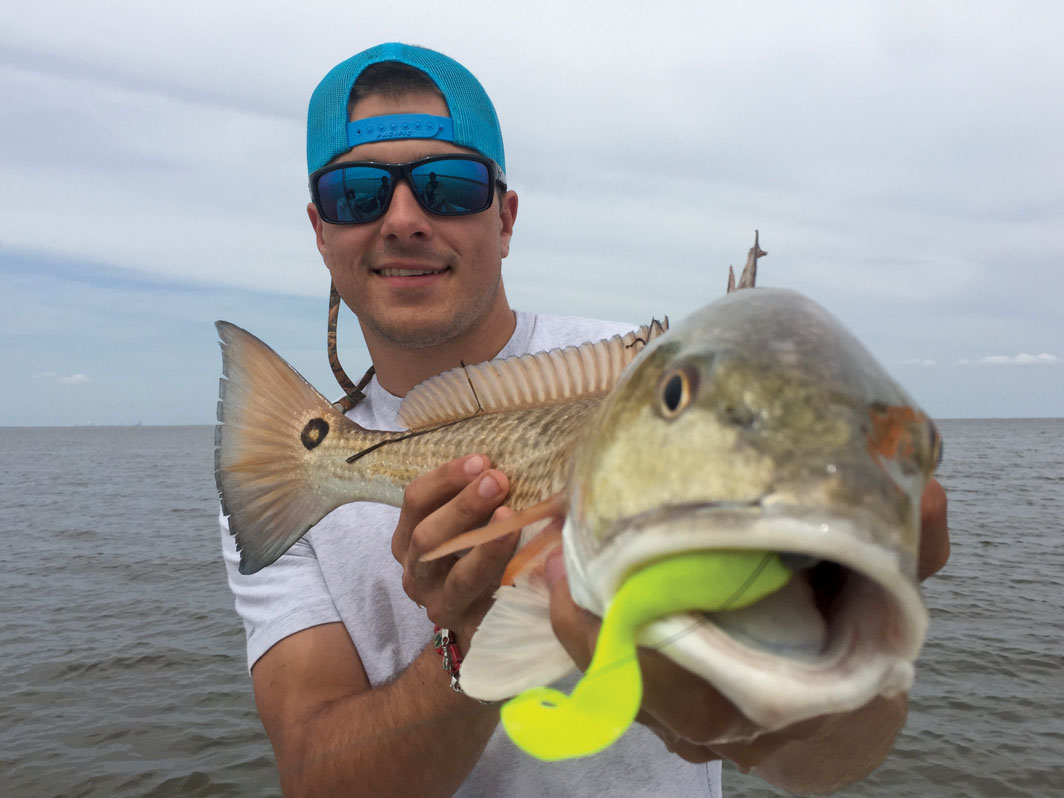 Believe it or not, some areas along the south shoreline are already producing trout and a few reds.

Each month as the days peel off the calendar and my deadline for TSFMag rolls around I find myself in the mode of "forecaster" or "teller of the future" as I try to give our readers a jump on upcoming fishing patterns. Well this month is a little different for me, and I need to share some of the recent past in an effort to help with the future, if that makes any sense. Our area of the state just recently suffered record-breaking flooding that I personally hope never happens again in my lifetime. The aftermath of all the water will undoubtedly make changes to the Sabine area that will no doubt take some time to figure out and truly understand.

What led up to the catastrophic flooding was actually the culmination of several events all converging at once, a perfect storm if you will. Toledo Bend reservoir has a profound effect on the overall state of Sabine lake even though it lies 80 miles to the north. The 187,000 surface-acre body of water is the last big stop in a huge watershed that encompasses real estate all the way up around Dallas. Heavy rains anywhere in the watershed eventually end up in Toledo Bend and eventually all of it drains into Sabine Lake. The chain of water running downhill keeps things in a constant state of change for the most part and that's what drives Sabine anglers crazy.

During the second week of March a frontal system stalled over the Toledo Bend area and dumped in excess of 20-inches of rain on the direct area. As if that wasn't bad enough the rain continued northward and dumped more water above the lake which obviously ran down the basin as well. At the time of the big rain event Toledo Bend was near full pool so the decision to open the flood gates was made and the water poured down river to the tune of double the flow of Niagara Falls. The Sabine River Authority dumped water as fast as it could to preserve the integrity of the dam which in turn started the flooding on the Sabine River. Many points along the river reached all-time record highs like the small city of Deweyville that went completely under water for several days. The river crested 3 feet above the previous all-time record. Almost incomprehensible.

As the major flush began to work its way down to Sabine Lake the water rose and the current began carving out places along the river channel and also filling others in. The rush of water displaced huge cypress trees that had been in the swamps for years and deposited them much farther down the river and even into the lake. My good friend and city of Orange police captain, Keith Longlois, was working the area during the time that Interstate 10 was shut down. On routine patrols Keith would give me updates on the progress of the flooding because my family and I were sweating out the possibility of our house flooding. Keith is an avid fisherman and hunter so his interest in the whole process goes without saying. "The sound the water made as it rolled under the IH 10 bridge was something I won't forget. We watched those big cypress trees north of the interstate just tremble in the current, it was amazing," said Longlois.

The Sabine River around Orange stayed roughly 3 feet above flood stage for four days and finally with the help of a healthy north wind it began to recede. In the days since, the river has returned to a more normal state and it has become evident that some areas have really felt the wrath of the flood waters. There are some spots that have turned into beautiful sand bars as the river pushed gorgeous white sand up into eddies where it settled out. Still other places like the islands along the ICW on the north end of Sabine suffered some unwanted erosion and appear to have shrunken right before our eyes. Sydney Island began rapidly eroding away after Hurricane Ike cut a small gut into it and now it is less than half the size it was ten years ago. The huge flow from the flooding did this popular spot no favors and that's a shame any way you spin it.

As far as a silver lining goes it's hard to find one at the moment but I'm sure some exist. The big push of freshwater will most certainly jump start the growth of grass in all the marshes that border Sabine and Calcasieu which in turn should help water clarity develop earlier than normal this year. The early growth of grasses will offer more places for juvenile fish to both feed and hide from predators. I would also have to believe that the early growth of grasses will pay dividends later in the year for the duck hunters but that remains to be seen.

At this moment the speckled trout and redfish are concentrated in small areas along the south shoreline and are moving farther out into the lake with each good tide exchange during the recent full moon period. Many anglers will be hoping the brown shrimp will make another appearance this spring and kick off another fantastic run of fish under the birds like we have enjoyed the past couple of years. Early-summer schooling fish are a great bonus and at times can produce some of the best quality school trout of the year. That whole program may benefit from the "freshening" of the marshes, but again this all remains to be seen.

Like always in this area, the only things that are certain is that things never stay the same for very long. The historic floods have changed the landscape forever and it's up to us to see just how different the lay of the land has become. The thought of exploring and re-discovering areas is both exciting and daunting at the same time. It's certainly a challenge and/or an opportunity I'm looking forward to.