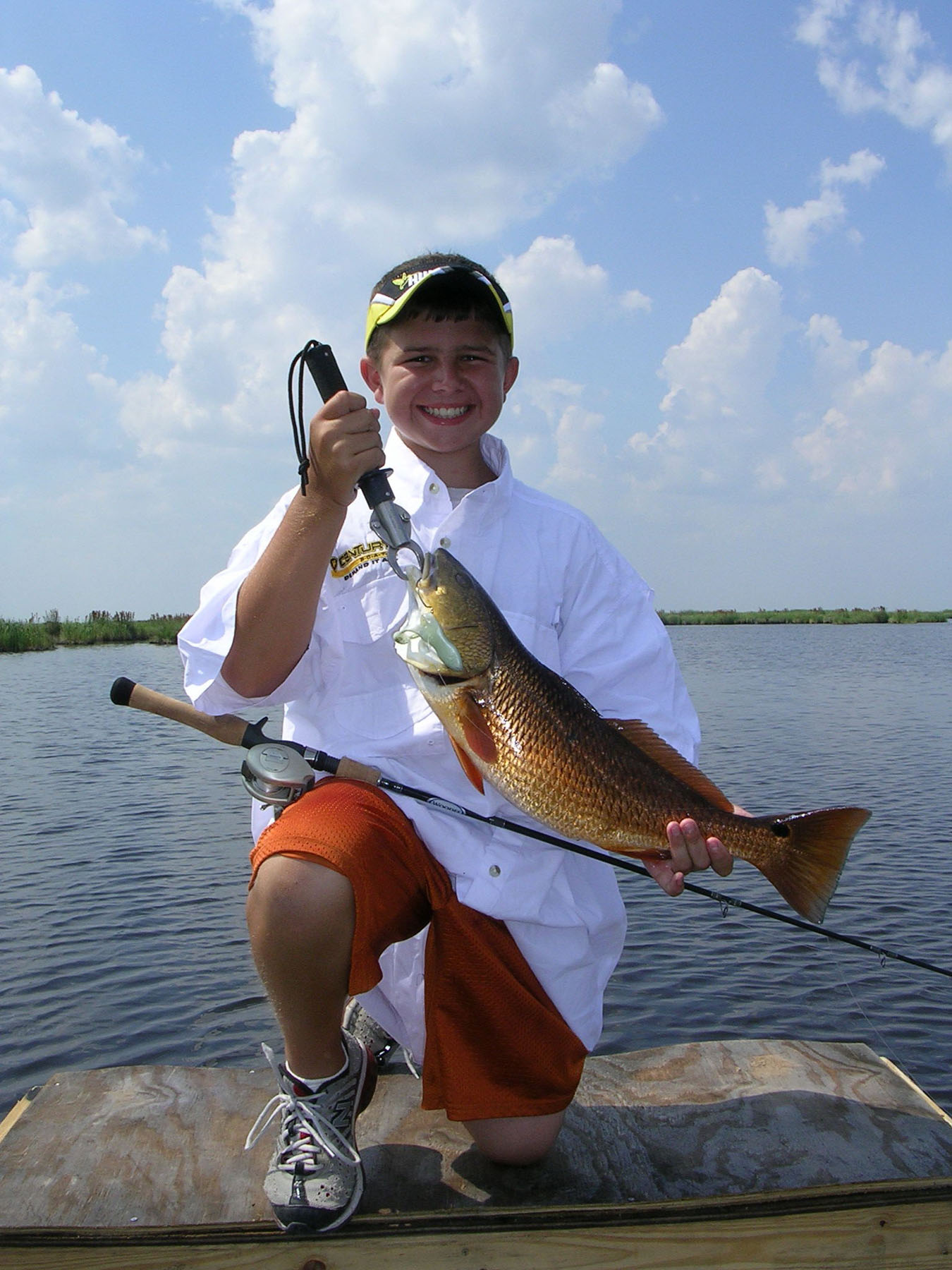 Hunter Uzzle baptized his new Woodee fishing rod in style with this beautiful 7-pound redfish.
In fishing, just as in life, you must exhibit control in all types of situations. The guy who cut you off on the highway, the unpleasant waiter, the annoying telemarketers, and the neighbor's yapping little dog are all prime examples of situations that test our self-control. Some people just can't deal with it, they just can't let it go and get on with whatever they were doing.

I have a very good friend who relayed a story about an incident he was involved in on the water. It seems my friend and one of his family members were fishing the mouth of a bayou on the Louisiana side of Sabine Lake when another boater ran between them and the bank in a less than courteous fashion. My friend immediately took offense and decided that this disrespectful individual needed to be taught some manners.

My friend caught up to the guy and tried to board his boat for a little "discussion" about boating etiquette only to be shown the business end of a large pistol. Instantly the situation went from bad to worse. Discretion being the better part of valor; my friend retreated to his boat and idled off only to have the guy with the pistol fire a warning shot as he was leaving.

Now if you are like me there is no fish in the ocean worth getting involved in a situation like that and "goose frabba" from the movie Anger Management comes to mind for some strange reason. Now I'm not going to bore you with dos and don'ts for your personal life, but there are a few control issues that you can take care of in your angling life.

Fishing too fast is a common problem, especially in the fall when fish tend to gather up and school in big bunches. Saltwater anglers who chase schooling fish along with freshwater fishermen who also key on flocks of birds over hungry stripers, hybrids, and whites are perhaps the worst. The frenzied activity puts everyone on the boat in high gear often leaving the majority of the water column untouched. It's a proven fact that smaller and more aggressive fish will be the first to attack a bait, so consequently, the "speed fisherman" may never see what caliber of fish is really down under the surface.

Savvy anglers will let a bait sink below the surface melee and are more often than not rewarded with better quality fish. Saltwater enthusiasts often find better speckled trout and redfish down under the small trout hustling shrimp and shad near the surface. By allowing the smaller fish to hit the bait and not setting the hook, anglers can get down past the smaller fish to where the big boys play. Some anglers will actually crawl their baits along the bottom with very little action and catch some of the best fish out there. It's difficult to do but well worth the effort.

By taking the time to patiently work a school of fish with a slower retrieve and perhaps a larger bait, anglers can effectively avoid smaller fish. The smaller fish will peck at the larger baits while the better fish will usually strike them with greater gusto. This approach proves itself in some of the strangest ways. Think about how many times you have caught a fish while dragging bait and correcting a backlash, it makes you wonder.

If we could see under the water and watch our baits and presentations; we would likely be surprised at how little of the water column we are actually using. In many situations it is only the first two feet below the surface. Burning a lure at high speed has it's applications but it's awful hard to argue with the success that the slower approach produces.

Speaking of slower approaches, another that comes to mind is dropping anchor while drifting instead of dropping buoy markers. In years past we would make long drifts down Sabine Lake, catch some fish, and repeat the drift catching fish in basically the same area. It was fishing on a merry-go-round; you just went round and round until they quit biting. One day on Calcasieu I got schooled on a better way by a local fisherman. We were fishing the same area, just going about it differently. The local guy was sitting on anchor while I continued to make drift after drift on the same line. After about three passes I heard the local say to his buddy, "That guy has a beautiful boat, it's a shame he couldn't afford an anchor." After that encounter I decided to try fishing like the locals and it has paid big dividends.

If you watch these guys, they keep the anchor real handy, one or two bites in the same area and they ease it overboard and fish the area thoroughly. These patient fishermen usually wind up catching more fish while others who continue to drift miss out on much of the action. I am sold on the technique because it works; we use it quite often in the spring on the south end of Sabine.

Taking the slower approach a step farther; learning to anchor properly in deeper water can be critical to success. One day many years ago Capt. Dickie Colburn and I were fishing a stretch of the Sabine River where we knew a herd of redfish had been hanging around. For some reason we couldn't find them until we adjusted our position on the anchor by letting out about 30 additional feet of line and slipping into the perfect spot. Our adjustment put us within casting range yet held the boat from drifting into them. Any other setup would result in either spooking them or not getting bit; neither of which sound good at all. By adjusting our position we were able to cast over a submerged point where the redfish were ganged up escaping the current. Sometimes a few feet can make the difference between a great day and a zero.

During the coming months your patience and abilities will be tested not only by other anglers but by the elements and the fish as well. A more controlled approach will pay huge dividends as the crowds descend on the bays for one last month of fishing before hunting gets underway the first weekend in November. It never fails this time of year, everybody hears about how good the fishing is and how easy it is to catch fish so the thundering herd descends upon on the coast.

Regular anglers know this is coming so they adjust accordingly and make do until the crowds cease.

Remember there are plenty of fish out there for everyone; stay clam and patient because fishing is our sanctuary and the actions of others should never be allowed to ruin that. Enjoy the fishing and the cooler weather and be sure to share the outdoors with someone who may not know just how wonderful it really is.