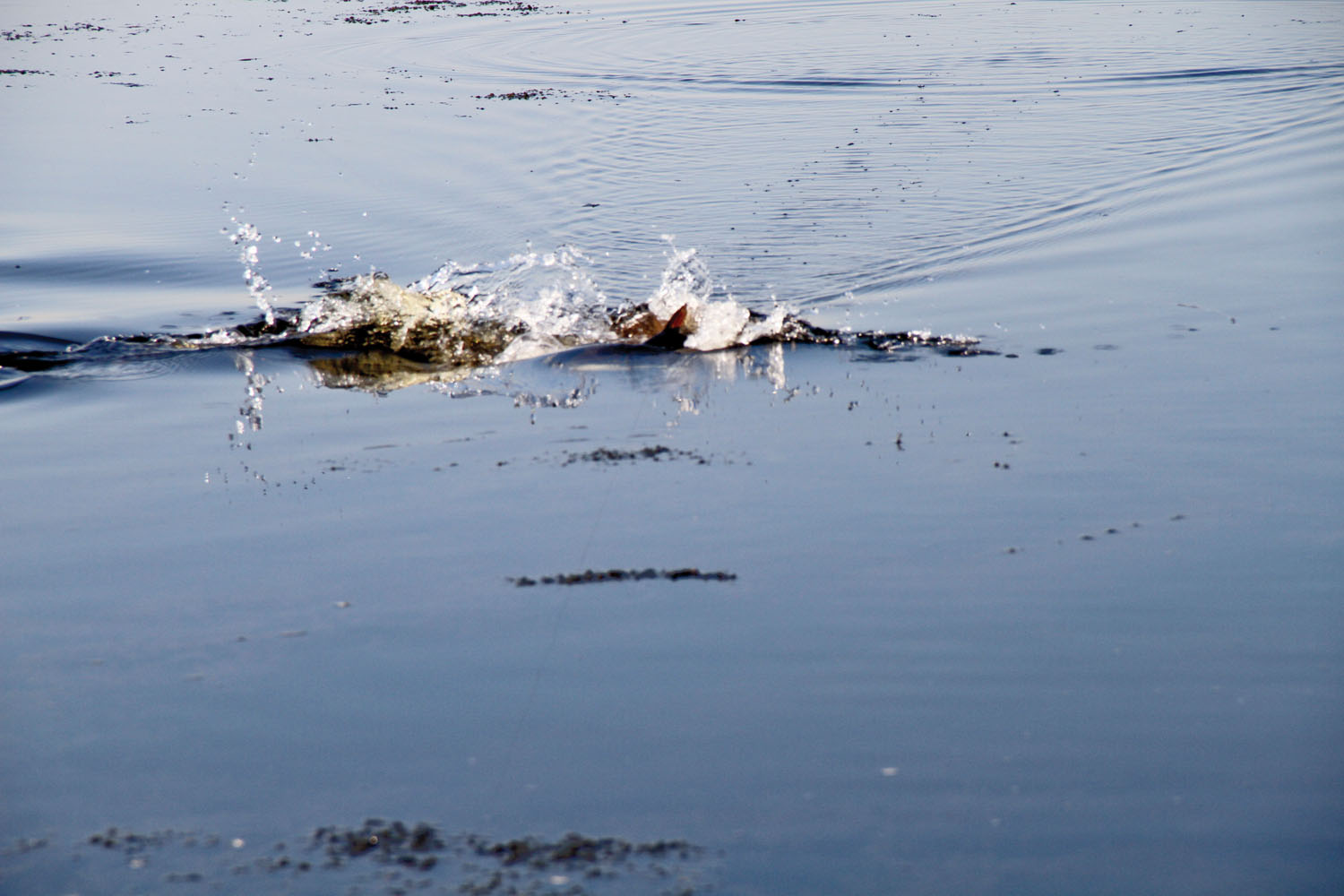 With or without your lure in their jaws, the hole they blow in the water is always a thrill.

I have no idea how this happens, seems only a few weeks ago we were in the middle of a mini-winter and successive cool fronts (notice I didn’t say cold) continued to remind us how nice 60⁰ days with near zero humidity can feel. But all that is a distant memory, flipping the calendar to June means summer is officially here and the dog days aren’t far off. Before you know it the atmosphere will be so thick we’ll need a snorkel just to perform everyday chores.

Gone are the mornings of waking to snapping flags as the famous south and southeast winds so characteristic of springtime in Texas have diminished. The summer months usher in calmer days and we will find ourselves begging for cloud cover or a slight breeze to cope with ever-climbing temperatures under blue skies.

As the weather changes so does the focus for many anglers along the Texas coast. During winter and spring, the vast majority of ink in most fishing publications is dedicated to the pursuit of big speckled trout. Under normal circumstances, November through April will produce the lion’s share of bragging-sized fish, so it only stands to reason that all the attention is focused on that subject and species. As the calendar and seasons bring us into summer, the focus of many artificial lure anglers leans toward Texas’ second most-glamorous species - the red drum.

I have no problem professing my affinity for the redfish because I truly believe they have more to offer than just about any other fish that roams our coast. I love chasing trout, don’t get that confused or twisted. A big speckled trout has a certain feel to it that is difficult to describe, perhaps because they are so rare and highly-coveted. A solid redfish, not even a giant bull or anything like that, on the other hand, can also be a sensory overload that is very often under-appreciated until it runs off with about half your line. Just to show that it can.

Redfish deserve a little more respect in my estimation because of what they bring to the table, figuratively and literally. Perhaps my “man crush” on the redfish comes from the fact that unlike trophy speckled trout, you can watch redfish “do redfish things” and that is a treat for any angler. Seeing these fish cruise around in shallow water, forage for food, swim in schools, lay around lethargically, or just plain disappear in broad daylight is absolutely mesmerizing to me. Learning to read their body language and adjusting to their variables is a visual puzzle that, once solved, provides endless enjoyment. It is truly gratifying to watch these fish, figure out what they want, and then see them react exactly the way you hope they will.

On the other hand, redfish can frustrate anglers to the point where even a cold beer or glass of good bourbon cannot soothe the sting. I’ve had days where the redfish have just completely refused to cooperate in the slightest, which in turn leaves me scratching my head, questioning both my sanity and angling skills in one fell swoop.

Imagine making countless perfect casts and watching fish after fish swim up to the bait as if they are about to inhale the offering, only to inspect it and turn violently away – leaving a hole in the water that takes minutes to fill. Some days it doesn’t matter what you do they just refuse to cooperate. On days that the redfish refuse to play, all you can do is learn from the experience, put a Band Aid on your pride, and get after them again the next day. Bipolar, perhaps. Their attitude can change overnight and eat anything you throw at them the next morning. The redfish’s unpredictability is what keeps many enthusiasts coming back for more.

Sabine and Calcasieu will both be fantastic places to chase redfish in the coming weeks and months. Huge schools of pogies will roam the open waters of both estuaries and be relatively unmolested – until the switch flips and the redfish go absolutely berserk. Many times they will school in open water during the heat of the day, when the majority of anglers are lying in the shade or A/C, sipping iced tea or cold suds.

However, anglers that tough out blazing sun and sweltering heat are often treated to some of the most fantastic fishing action you will ever experience. Having several acres of surfacing redfish all to yourself, watching them blowing holes in the water as they run roughshod through rafts of shad and mullet, will bring a smile to most any angler’s face.

The melee soon develops into absolute chaos and can last an hour or more. Perhaps the most common mistake anglers make is leaving too soon when the surface action fades and the reds can no longer be seen crashing bait. Quite often it’s only a matter of minutes before the craziness gets cranked up again and the patient anglers are rewarded with another round of redfish mayhem.

The overall abundance of redfish in both Sabine and Calcasieu is about as good as anyone can remember. For several weeks now the redfish have been much easier to pattern and catch than speckled trout, and that has been a boon during the windy conditions we have been forced to deal with all spring long. I have no doubt that this summer will offer some of the best redfish action we have seen in a while, and there will be no wrong way to catch them.

From live bait to artificial and fly, there will be ample opportunity to chase these hard-fighting game fish. Who knows, after this summer, the redfish may just earn a little more respect and gain a few new fans. Until that time I will continue to serve as president of the Redfish Fan Club. New members are always welcome!