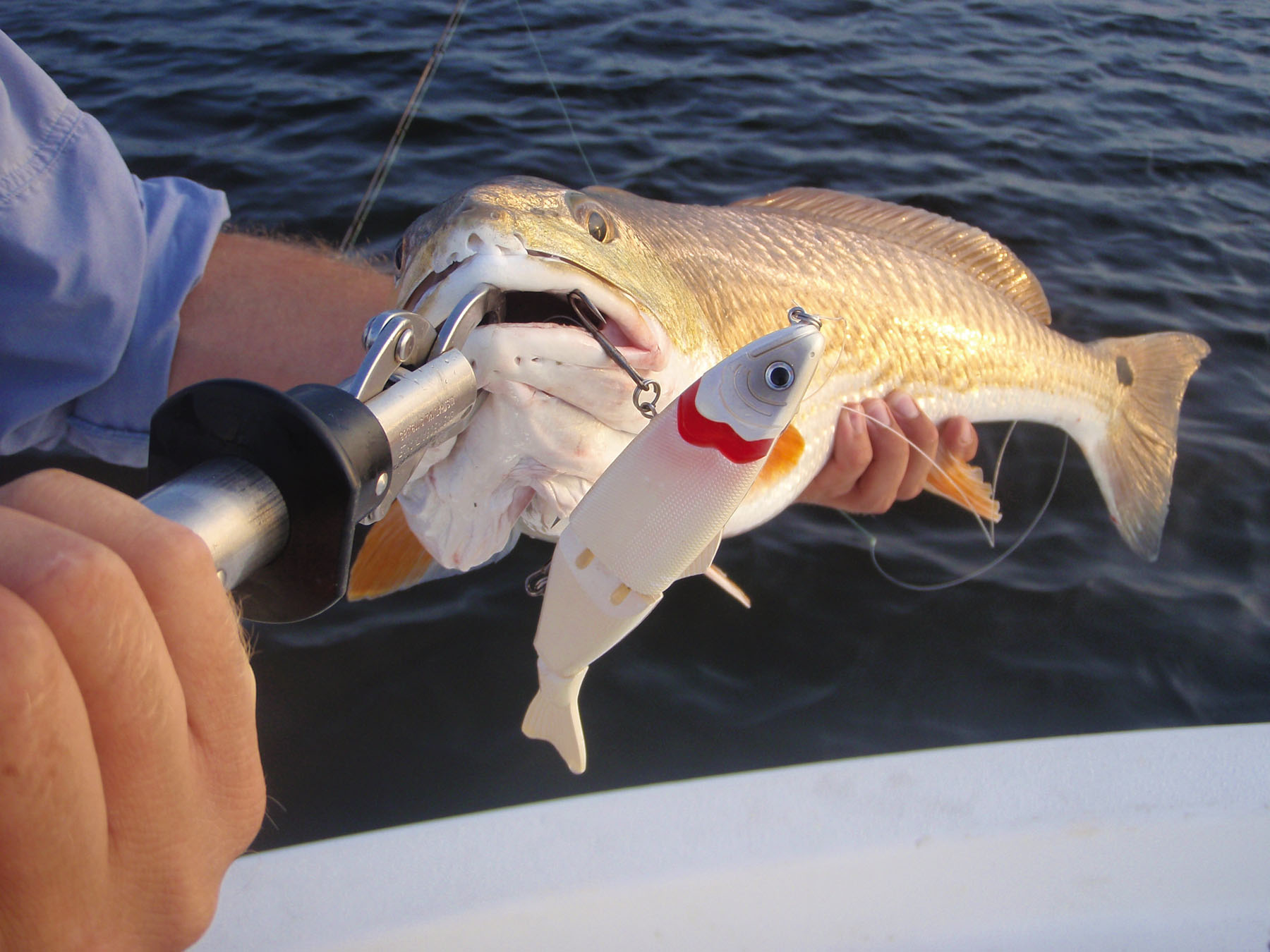 Originally created for freshwater applications, Dynamic Lures new “Dynamo” has great potential as a “crossover” swimbait.
"What in the heck are you gonna do with that? Do you think we're on Toledo Bend or Sam Rayburn? Swimbaits and jerkbaits are for spawning bass, not reds and trout!"

Those were the first words out of my partner's mouth as I tied on a lure that was not saltwater-worthy in his opinion.

I took the hazing with a smile and proceeded to show him just how effective these lures can be. After four redfish and three trout it appeared that my fishing partner had been touched by a TV evangelist, seen the light, eager to repent. The thought of him getting schooled by a lure that he held in such low esteem made the whole episode that much more gratifying. Can I get an Amen?

Yes indeed there is a place for such a line of lures in the world of saltwater and, as a matter of fact; I believe it's a big place. Sub-surface swim and twitchbaits are gaining popularity, very similar to the way spinnerbaits burst on the scene a few years ago. There for the longest it was a joke to throw spinnerbaits in saltwater until they started catching fish! Now everybody has a spinnerbait line and swears they invented the whole concept. Personally, I don't care who figured it out, I'm just glad they did.

Now as far as the swimbaits and twitchbaits go, many veteran anglers will smile as they relive days on the water when they threw Cordelle Brokenbacks and Red Fins and caught trout that turned other anglers green with envy. The concept is not new by any means; it's just been a while since it was put in play.

I can remember years ago watching a TV show hosted by Orlando Wilson and he was just wrecking some huge trout on Lake Calcasieu with another local fisherman. Both were throwing hard plastic twitchbaits like a Rogue or Rapala and it was amazing what kind of fish they caught. Years later, when I first started really fishing Calcasieu, I met Don Scott, the guy who was fishing with Orlando on that very TV show. As you might guess he was still throwing the same style plug and getting the same results. Since that day I have developed a great fondness for these lures and how well they catch fish in a variety of conditions. I am very thankful to have both seen that TV show and to have spoken to Don about the technique. It has helped me on many occasions when nothing else would.

Now the hard plastic twitchbaits do well but lure manufacturers have gone a step farther and made these baits even more lifelike by pouring them out of soft plastic material and giving them an even more appealing swimming motion. The folks at Texas Tackle Factory have a really good representative in this line of baits called the Killer Flats Minnow XL, aka, Big Mino. The bait has a bulky profile with lots of tail action. Perfect for off-color conditions. At 5" length it is plenty big enough to entice big fish looking for a super-size meal. Perhaps the best quality about the bait would be the many ways it can be rigged.

I spoke with Tackle Factory's Jason Bryant and here's how he explained it. "The thing I like most about the Big Mino is its versatility. The belly slot allows it to be rigged in virtually any manner you can think of. It's equally effective on a standard jighead, Texas-rigged on an offset wormhook or rigged weedless on one of TTF's Weedkiller jigs. On light jigs, the natural buoyancy gives it a very slow fall great during winter when fish metabolism is low and they tend to feed more casually. That slow fall also makes it a good choice in very shallow water over shell or grass. I like rigging the Big Mino weightless and using it as a sight-casting bait for reds in the shallows. You can swim the Big Mino across the surface and create a visible wake. The size and action of the big paddle tail make it an excellent bait for off-colored water and also when fishing at night."

And now back to swimbaits: Obviously, topwater plugs take care of fish willing to feed on the surface; that's a no brainer. Soft plastics do a great job in the lower portions of water column, even when rigged on lighter jigs. But what about the zones in-between? What lure or lures do you offer when the fish are suspended and not feeding aggressively? What are you going to put in their face that will remain there long enough to draw a strike?

Here is where the swimbait really stands out in a crowd. Think of how many days during summer when you just cannot get those fish to come all the way to the top and seal the deal on a surface plug, and all those lackluster short-strikes and quick pecks down deeper that just drive you mad. Give them a shot a swimbait retrieved at a seductive pace to suspend anywhere from one to three feet below the surface and see what happens.

You want another place to try the technique? Head for the jetties and be prepared to hang on. The lion's share of Sabine's big trout in the summertime will be caught at the jetties, period. Easily the number one bait on the rocks at Sabine right now is the Swim'n Image made by Heddon. This plug, along with others like it, is perfect for probing those out of the way ambush points in the rocks where big trout and redfish like to hide. The bait is easy to control in that perfect two-to-three foot depth range and just flat-out catches fish. It is very user-friendly and can be retrieved in any number of ways that will drive fish mad. Only problem I can see with this bait would be price and availability. Try and find one at your local tackle shop; you had better be there when they are unpacking a new shipment is all I can say. When word gets out the pre-dawn jetty warriors will buy them all.

You know as well as I that specks and reds aren't the only fish on the rocks and there are few things I hate more than donating $8.00 plugs to jacks, Spanish macks, and sharks. The bigger soft plastic swimbaits will greatly reduce your anger quotient and ease your pain when it happens. Soft swimbaits are easy on the pocketbook, catch fish, and are user-friendly; so it just makes good sense to carry some in your arsenal regardless the time of year. Tapping into this style of fishing will undoubtedly pay dividends for you because now you have all your bases covered from top to bottom.