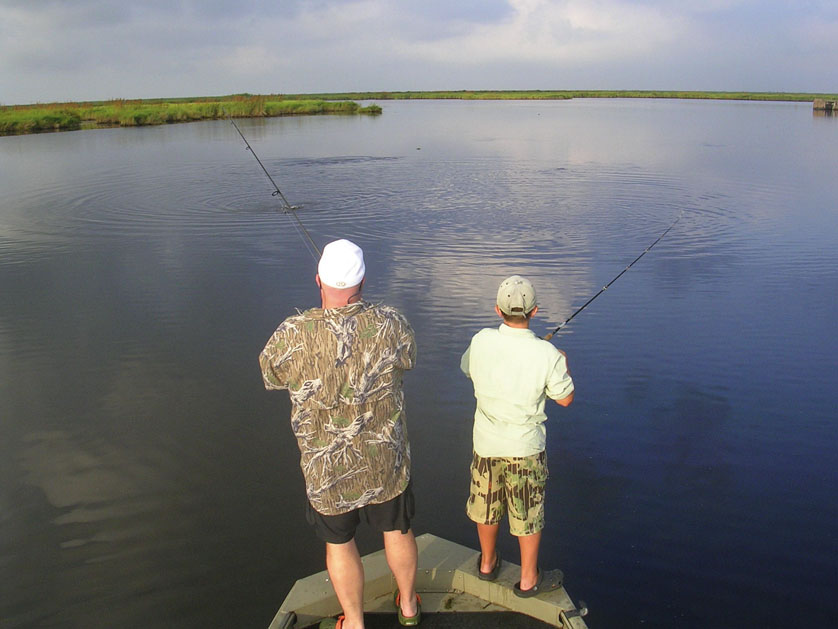 In nearly every facet of life it's nice to have choices. Being able to decide between different things, and choose the one that appeals to you most, is definitely part of the American way. So - if you were looking for a time of the year that possibly offers up the most options, choices, and variety; it would be almost impossible to beat the fishing you can find on Sabine Lake during the closing weeks of November and early December.

Here on the Texas coast, weather patterns can range from basking in summerlike warmth to the chill of winter within the stretch of a few days, and this means multiple feeding and migration patterns for the most popular game fish will be in play. Options can include just about any type of tackle or tactics you enjoy, and that makes it one of the best times of the year to be on the water.

Now just like a casino in Las Vegas, where there are different games that require varying levels of skill and strategy, there are styles and methods of fishing that are also different. Let's start with one of the most popular during seasonal bait migrations chasing the birds.

There are tons of folks who wait all year for the birds to really get cranked up and point the way to easy fishing excitement. Schooling trout and reds under flocks of gulls are a fall mainstay on every bay system and any angler who has spent time catching fish like this will tell you how much fun it can be. Soft plastics on jigs, with or without rattling-style corks, are pretty much the standard method while fishing under the birds, and for a couple of reasons. First reason that comes to mind is that you can cast them a country mile which keeps you far enough away from the action to avoid spooking the fish yet still within range. The single hook on the jig head also offers much easier hook removal, which means quicker follow up casts and more hook ups, and less chance of injury to fish when practicing catch and release. The single hook is also less prone to tangling in a dip net and also from snagging other anglers in the boat If you know what I mean.

As we move down the aisles of the late-fall fishing casino, away from the slot machines where the folks fishing under the birds congregate, you will find the table games, ones that require a little more skill. The blackjack table would be the next stop in the casino and fishing for flounder would be a comparable option for an angler to try his luck.

Flounder fishing during late-November and early-December is often overlooked, due mainly to the pace of the game when compared to the run-and-gun excitement of hustling fish under the birds, plus the fact that the daily bag limit is temporarily reduced to two fish during the month of November here on the Texas side of Sabine Lake. It takes a well disciplined angler to turn their back on screeching gulls and stare at a shoreline or marsh drain instead. Anglers that master the art are often rewarded with the best quality flounder of the year though, and the big passes that lead from the bays to gulf will be the main targets of those wanting to cash in on the really big ones. The flounder that come from the marshes and shallow water will rarely compete in size with the ones taken out of deeper channels. Anglers concentrating on deep flats near even deeper channels will locate some impressive schools of big flounder this time of year. Live bait is always a best bet when targeting big flounder but scented soft plastics produce some good fish as well. If you really want to increase your odds of catching a truly big flounder then this the time to be on the water.

Next stop on our little casino tour of the water is the poker table. Here is where strategy, reading your opponent accurately, and a little help from Lady Luck is the name of the game. At this poker table is where you'll find inshore fishing's version of the high rollers trophy trout anglers.

This season on Sabine and Calcasieu has long been synonymous with catching really big trout. The combination of available food, along with cold fronts and warming days, are an incredible combination that keep big fish hunters coming back for more every year. Reading the water and conditions is exactly like reading a hand in poker where certain situations dictate your strategy while other times you are forced to go against the grain in order to win the hand.

Big trout hunters will most certainly be "all in" on days following cold fronts as some of the heaviest fish of the year will be caught when the weather moderates following a strong norther. The same 25" trout that weighed 4.5 to 5 pounds in the summer may balloon toward weights exceeding 6 pounds as their diet changes and metabolism begins to slow. Take this into consideration and you can imagine what a 28 or 29-incher has the potential of weighing. That's the reason you see those guys spend hours upon hours waiting for that one big bite and the shot at a career fish.

Now granted, these three patterns and styles of fishing are very broad but they also represent the majority of the inshore angling population. Most Texas coastal anglers will fit into one of these groups and each will do so with a smile on their face. The opportunity to choose between so many options very rarely gets better than it will during the next several weeks. Another thing that will put a smile on most fishermen's faces will be the fact that a good bit of the traffic on the water will subside as the Texas hunting seasons are running full steam this time of year. October is notable for its high traffic here on Sabine, given the pleasant weather along with the bird-fishing and early stages of the flounder run, but come late-November the chance to tag a Booner whitetail or fill the freezer with tasty backstraps is more than most can stand and their fishing gear goes in the closet until spring.

Despite the sometimes challenging weather, fishing in the late-fall season can be just like a trip to the casino where you can strike it rich or go home wondering how you're going to get the rent paid. The opportunities are there for the taking and the options keep you coming back for more. Personally, I'm a big fan of this season because it really showcases the diversity of my home waters of Sabine Lake. We have so many productive patterns to fish that you always have a shot at getting your string stretched. The true bonus will come if we can avoid major flooding from the Sabine and Neches Rivers as the salinity and clarity in the lake are just gorgeous as it gets right now. The forecast for some exceptional fishing looks very promising and that's about as good as leaving the casino with money in your pocket.