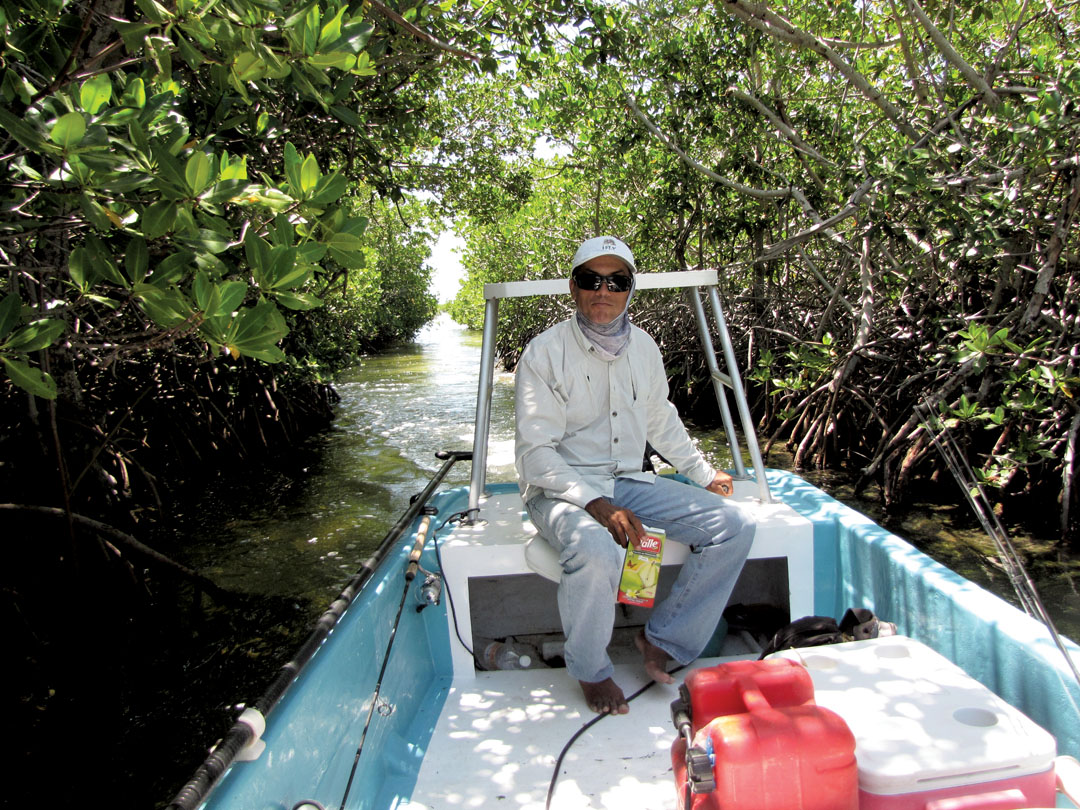 Enrique Trinidad navigates thick mangroves in search of Isla Blanca tarpon.
For the past ten years my family and I have made at least one trip each year down to the Yucatan, specifically to the island of Cozumel. We have some very close friends down there and I know it sounds goofy but we actually feel like locals. Our friends have a dive shop and hotel which is perfect because it's small and intimate, very different from the all-inclusive venues that process guests like herds of cattle.

Over the years I have become really close to a few of the dive boat captains and we fish together at least a few times each trip. My wife, Leslie, is constantly amazed, "What do you guys talk about, how do you communicate?" Her reference being made to the fact that I speak just enough Spanish to get in trouble and the captains are the same with English. I always tell her we speak the language of fishing and its universal if you really love the sport. For example if you ask someone, "How was your day on the water?" You can tell almost immediately just by their eyes and their facial expressions how good it was. Fishermen are the worlds best at conveying enthusiasm and the message is not lost on one's ability to speak a language.

My best fishing buddy on the island goes by the name of Fierros and he is truly a fisherman. We met on one of my first trips to Cozumel and we immediately hit it off as a discussion about fishing came up in the dive shop. Through a little translation we wound up fishing every morning for the next five days. We had a blast even though we really couldn't do a whole lot of talking, we knew what was happening and it was good. It was really cool to watch as Fierros fished with a hand line outfitted with what appeared to be an old decoy weight and 3 hooks on separate drops. I, on the other hand, was outfitted with a high-end travel rod, 12-pound test, and top of the line baitcaster. We made quite a pair. This year Fierros was unable to fish with me so I got the next best thing, Fierros Jr.! That's right, I got to fish with his son and it was just as good as we enjoyed two really nice days on the water taking a variety of fish.

This year our trip was a little different in that we went across to the mainland after four days on Cozumel and spent four days in Playa Del Carmen for a wedding. While in Playa I made arrangements to fish north of Cancun at Isla Blanca, thanks to Andy Packmore at The Traveling Angler. My son, Hunter, and I were met by our guide, Enrique Trinidad, in Cancun following a forty minute taxi ride from Playa Del Carmen. Enrique then took us to the small marina he calls home base.

Seven panga skiffs were tied at the dock with Enrique's being the nicest by far. After a short boat ride across some beautiful water we settled on the back side of a small island and were immediately greeted by snook crashing in mangroves. Like most folks, I wanted instantly to head up to the skinny stuff and find the culprit but Enrique had other ideas.

"Permit at two o'clock," Enrique advised from his perch on the poling platform pointing out the approaching school.

"Okay, if I can't chase snook you can twist my arm and make me chase permit" I said to Hunter as we both were fired up to get shots at these magnificent fish. Several schools emerged along this particular flat and with only one hookup we decided to try the next location.

The small panga glided to a stop as we drifted into a small canal lined with lush mangroves. I stood on the front deck in awe of the whole scene and just happy to be in a place like this as we scanned the water for life.

"Tarpon ahead" was the call from Enrique as we watched several fish come up, gulp air and give away their position. A quick cast with a small jig provided an instant hookup and a juvenile tarpon went airborne in a series of acrobatic jumps that eventually freed him from my lure. This drill continued for a couple of hours as we jumped at least a dozen more fish and saw countless others. The path through the mangrove canals was possibly one of the coolest things I have done and greatly added to the adventure. We had to lay down on the deck several times and actually pull the boat through the trees using the overhanging limbs. The thick cover would eventually open up to expose another series of canals or small lagoons and the chase would continue.

One of the larger lagoons we entered was dotted with white sand potholes and deep grass; it was much different than anything I had fished on the Yucatan. The potholes would hold nice snook and several species of snapper that just couldn't resist a Gulp shrimp. Every now and again we would venture away from the potholes and back to the mangroves for yet another shot at tarpon and it just kept getting better as the day wore on.

Now if it was up to me I would still be there chasing whatever fish was closest but unfortunately we had to start working our way back to the dock. On the trip back we stopped on a huge flat that was dotted with little mud boils that signified feeding bonefish and we decided we had enough time to investigate. Sure enough we encountered several schools of hungry bonefish that really knew how to stretch your line. No really big bonefish ever showed but there were certainly plenty. This last spot topped it off for Hunter and I as we talked about how we had a legitimate chance during the day at a Grand Slam in one trip; that being tarpon, bonefish, snook, and permit. Isla Blanca was an absolutely amazing experience and one that I will not soon forget.

The language barrier that exists between some people can easily be overcome with a bit of patience and willingness to learn. Knowing that places like Isla Blanca are out there to be enjoyed should be enough to encourage the adventurous fisherman to make the effort and see just what the experience is like. Despite the complete understanding of all the words, we have a lot more in common than anyone would know.