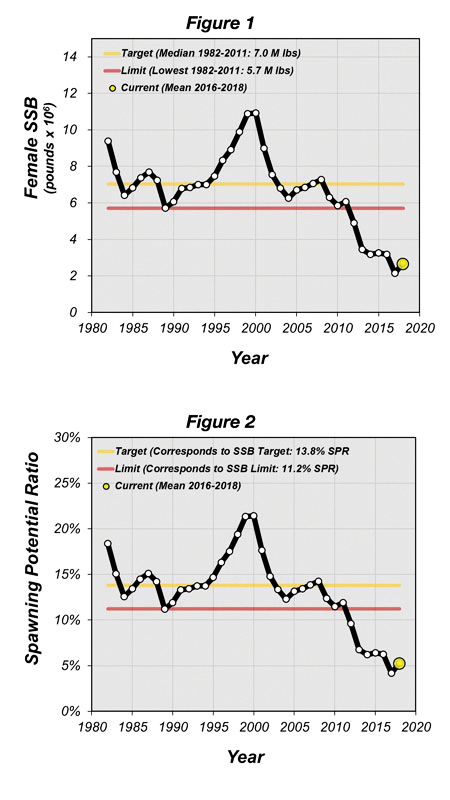 Spawning Stock Biomass (SSB) and Spawning Potential Ratio (SPR) – data that was allegedly leaked to media before being fully vetted by Louisiana Department of Wildlife and Fisheries. SSB and SPR are considered critically important in the evaluation and formulation of fisheries management plans. If the data in these graphs is indeed accurate, LDWF may be forced to enact changes to reverse the trends.

Unique, confusing, and fantastic are all adjectives one might use if asked to describe Sabine Lake fishing with a single word. I fully agree with these, along with a slew of others. While we are still reeling from the effects of successive tropical downpours, it is more than painfully evident from a fisheries viewpoint that Sabine Lake is as threatened and fragile right now as it has ever been.

2019 has been an historically poor year for catching speckled trout on Sabine. Just as it seemed we were turning the corner to recovery, Tropical Storm Imelda dumped forty inches of rain on our heads, setting us back to square one, and then some.

For months now we have lamented the state of the Sabine trout fishery and folks like Dickie Colburn have been encouraging anglers to release all that they catch in hope of providing a spawning boost to the beleaguered stocks. Many have adopted this proactive stance while others, unfortunately, continue to take advantage of the “Louisiana Loophole” to retain even greater numbers of fish. It’s no secret that there are at least two sides to every situation and this has been going on for quite some time. This, however, may be coming to an end sooner than some would like.

I can remember as a kid the first time I ever really caught a boatload of speckled trout. The Louisiana daily bag limit was 50 fish in those days. While 50 may seem a staggering number by today’s standards, it was actually the first bag limit Louisiana enacted for the species. Prior to that there was no limit.

Here in Texas, the first speckled trout bag limit was enacted in 1978 and provided anglers the opportunity to keep 20 per day at a minimum length of 12 inches. Then came the infamous 1983 freeze and the limit was reduced to 10 fish with a 14 inch minimum length.

Back to that boatload of fish, my friend and I stood ankle deep in trout as the floor of the 18-foot center console we were fishing from was being flooded with dozens of speckled trout from a huge school under working gulls. Every cast was a keeper and we were hellbent on catching a “limit.” Let me tell you, 100 trout is a bunch of fish any way you look at it.

Eventually, the limits on both sides of the border were reduced – first 25 and then 15 at 12 inches minimum for southwest Louisiana, and 10 at 15 inches minimum in Texas.

Why is this such a big issue? It’s because Sabine is a border lake with two sets of regulations, with the primary deciding factor being where you fish and where you launch. I can’t count how many times I’ve been asked to explain the regs to visiting anglers. No matter how hard I try it’s always complicated.

The way things stand at present, the simplest and safest approach is to possess a valid fishing license and abide by the laws of the state from which you launch your boat. This simple solution works for most folks but there’s always somebody trying to pull a “Louisiana Shuffle” – meaning they launch from Texas and try to sneak back with a Louisiana limit. Another version is Texas fishermen trailering across the bridge to launch, solely for the purpose of taking advantage of the more generous daily bag.

I am completely against this practice, and for my own personal reasons. In fact, when I fish Calcasieu I require everyone on my boat to abide by Texas limits, even though we could legally keep Louisiana limits. To rub salt in the wound, I see folks advertising like carnival barkers, catering to the greedy about how many more fish they can keep if they play the loophole game to the fullest. But that may soon become a thing of the past.

Louisiana Department of Wildlife and Fisheries recently released data suggesting their speckled trout population, statewide (not just Sabine and Calcasieu), is in great decline and measures to correct the situation may soon be forthcoming. In other words a limit reduction is likely pending and that will do nothing but help the Sabine Lake fishery at a time when it needs it most.

On September 1 this year, TPWD rolled the five trout limit that had prevailed on the Lower and Middle Coasts all the way to the Louisiana border. Since 2014 the Upper Coast had been spared and still operated under the old 10 fish rule. Many of us on Sabine sat back and worried what would happen when the 5 fish limit went statewide. The fear that Houston anglers would make the drive east to descend upon Sabine like a plague and take advantage of the “Louisiana Loophole” was rampant. That it might happen when Sabine’s trout population was seemingly at an all-time low made it even scarier.

If by chance you don’t think that’s a real possibility, just cruise the boat launches on the Louisiana side during November when the Texas flounder limit is restricted to two fish. Ninety-percent of the trucks and trailers will be sporting Texas plates. If and when the speckled trout population rebounds, you can bet there will be a huge increase in the number of Texas anglers trailering across the border unless the Louisiana limit is reduced.

According to the LDWF reports, the speckled trout population has taken a substantial downturn across the board and the committee is considering action in the very near future. The limit reduction by Louisiana will curb some of the pressure on the fishery and promote the population rebound regardless of what some might think. The numbers published in the report are eye-opening to say the least. The specifics of the report are readily accessible on the internet. Though it appears necessary, a ton of folks will be impacted by the decision to reduce the Louisiana limit and it will surely become a red hot topic all across the Sportsman’s Paradise. The power struggle that will ensue could be more entertaining to watch than a heavyweight championship boxing match.

In the meantime anglers here on Sabine will sit and wait for things to get better and hope for a much-improved fall season, compared to the last two years, anyway. The speckled trout were showing signs of coming back to life in late summer, before Imelda came on the scene.

The redfish population will stay strong and largemouth bass fishing has become borderline phenomenal, but the trout are relatively non-existent compared to years past. They say that everything comes and goes and then comes back again. I hope that’s the case for our fishery. It’s been a difficult stretch here on Sabine but with a little help from the Louisiana Department of Wildlife and Fisheries we could be on our way to a rebound.

I hope to see those days again when we lose track of how many fish we caught and leave them biting as we head back to the dock.