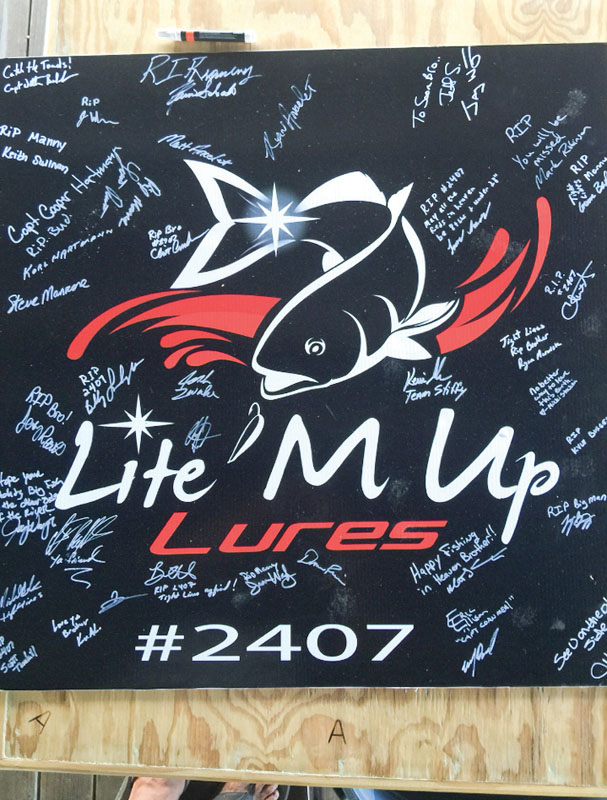 For as long as I can remember there have been, and always will be, divisions among fishermen – ages old arguments that for whatever reason continue to surface and attempt to divide the fishing community. Live bait versus artificial, waders versus boaters, and so it goes.

I guess if everyone thought alike the world would be a dull place. Without opposing views how we would ever learn new and potentially better ways of doing things? On the other hand, there would also be people who would continue to do things that have a negative effect on others without realizing their actions are detrimental to the environment and also those around them. The only thing for certain is that each side has a point of view and more often than not they are inclined to hold fast to that opinion.

An increasingly hot and often discussed topic along the Texas coast is fishing tournaments and the traffic associated with them. In our little world around Sabine Lake it's ridiculously easy to spot the out-of-town boats and realize when the traffic is much higher than normal. Local boat launches swell with wrapped trucks and boats, more reminiscent of a NASCAR event than a fun day of fishing.

Tournament guys show up in places on the water many locals wouldn't dream of fishing. Many times the out-of-town anglers teach us a lesson because they are open to the idea of fishing any water, unlike locals who tend to shy away from certain places, mostly because they have never fished there.

Easily the greatest lesson Sabine locals ever learned came courtesy of the Troutmaster tournaments back in the late-90s when wade fishing burst on the scene. Once local anglers saw the kind of success these tournament guys were enjoying it was all over but the crying, everybody jumped out of the boat and into the next chapter of fishing. Now this process took some time to become accepted, it was new and nobody understood the "rules" so to speak. Boat anglers and waders clashed as they struggled to learn how close was too close, but eventually it became much more accepted and wading on Sabine is as common as it is farther south.

Fast forward to today and mention fishing tournaments and the conversation quickly turns to redfish as they are the current kings of competitive inshore angling events. Redfish tournaments have become increasingly popular for the simple fact that these fish are readily accessible in every bay and they're hardy – capable of surviving a day in the livewell way better than trout. Also, heavy slot-sized reds can be found just about anywhere in any bay and this greatly levels the playing field. The combination of having an event where the fish can swim away and the tournament sizes are restricted (slot-fish only) makes for an excellent format all the way around.

Now the popularity of these events often leads to a temporary increase in fishing pressure and herein lies the rub. Here on Sabine we see a few of the same problems each time a big tournament is scheduled anywhere between Galveston and Lake Charles. The expansive marshes between Sabine and Calcasieu become overrun and tower boats, in particular seem to draw the most wrath. These skinny water machines buzz all over the marsh, into posted properties and no-motor zones, seemingly with little regard for courtesy to fellow anglers or local regulations.

There have been instances where tournament anglers have been run out of posted areas by landowners – some honest mistakes and some incidents of blatant disregard. The number of boats running in the refuge areas (where no big motors are allowed) is staggering and frustrating all at the same time. The damage done to these fragile areas by big motors and props takes a long time to recover and it is completely unnecessary. Every now and again we see anglers who truly don't know they are in these areas and once they discover their mistakes they comply accordingly. Other times we see the same boats, who know the law but choose to ignore it, and those are the guys that give all the tournament folks a bad name.

Recently I was out scouting a few ponds and watched a tower boat "burning" pond after pond and I decided I'd had enough. I made several photos of the offending boaters and started making phone calls. Upon learning they were preparing for an upcoming Rudy's Redfish Series event I got in touch with tournament director Geoff Austin and was immediately blown away at his willingness to fix the problem.

Geoff aggressively approached his anglers about the situation and made no bones about their responsibilities to the environment and to the laws surrounding those areas. His actions were instantly very noticeable as the amount of traffic in those marshes slowed down considerably and those that were in there were all following the rules. Austin's stance on the matter and the promptness in which he addressed it showed his desire to promote his tournament in the most positive manner possible and I personally want to thank him for that.

Little did I know that the Rudy's Redfish Series event those tower boat guys were scouting ahead of would reveal an even more impressive side of the fishing community.

On August 15, Florida angler Manny Perez (who had made the cut to the Top 10) was fishing the final day of the event and passed away very unexpectedly while on the water. Manny was found floating a short distance from his abandoned boat that was adrift in Sabine Lake.

Other tournament anglers noticed Manny's boat adrift and thought he may have experienced engine trouble and hopped a ride back to the weigh-in. However, a call to the tournament director revealed something was amiss and a search was begun.

Manny was ultimately found almost a mile from the boat. First responders worked to revive him while other Rudy's anglers went to secure his boat. To their surprise, they learned Manny had a great stringer of fish in the livewell, 24.07 pounds to be exact. Unfortunately Manny's fish could not be weighed, and in an amazing tribute to their fallen comrade, all nine of the remaining Top-10 released their fish without weighing, saying, "If Manny can't weigh, none of us are going to weigh." The full field of anglers participated in an onstage group prayer for Manny and his family.

Fast forward one week to the Rudy's Redfish Series one day event on Sabine Lake where a sunrise service was held for Manny. Competitors went through boat checks and then idled out into the lake where they gathered for a service in Manny's honor. The outpouring of love and respect from the fishing community for Manny was incredible and the services for him were conducted with the utmost respect and honor Manny deserved. Tributes to Manny on social media with the code #2407 (the weight of his tournament fish in the livewell) have been posted and shared with thousands in the fishing world and beyond.

Geoff Austin and the folks at Rudy's Redfish Series have truly raised the bar in the tournament world as to how events should be run from top to bottom.