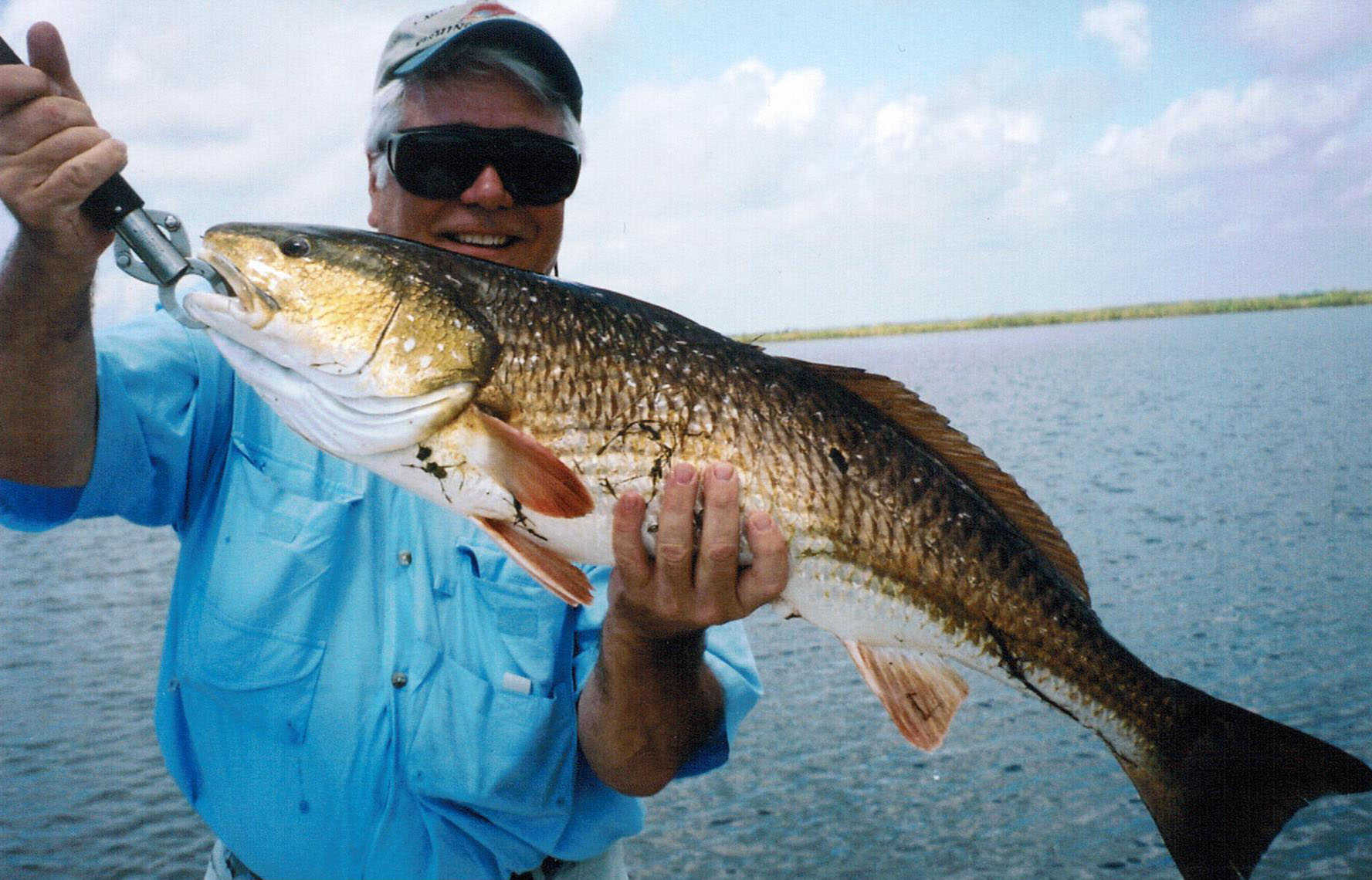 Barry Teare with a bruiser marsh red.
Technology is a great thing; the endless uses for gadgets and other electronic forms of communication have transformed a once very simple sport into a highly technical and ever evolving event. Perhaps my most favorite piece of technology has to be satellite imagery found readily on the internet. The photos of any bay system are right there at your fingertips and only a mouse click away. I know from speaking with countless tournament anglers from both fresh and saltwater backgrounds that satellite images help them to "weed out" bad water in order to concentrate on more productive locales. In years past many B.A.S.S. anglers would rent planes and fly over lakes in order to get a better vantage point, nowadays, all you have to do is point and click. Once you find a potential fishing area there is still some work to be done and this is where it gets exciting. The thrill of running somewhere and the feeling of discovery is almost as much fun as actually catching fish.

Arriving at the vacant launch with temperatures already starting to climb, Ron Begnaud and I prepared to head out in search of some willing redfish in a stretch of marsh that we had found on a satellite map of the area. Begnaud, who lives in Lake Charles Louisiana, is about as hardcore a marsh fisherman as I know and many of our conversations begin and end with thoughts of new and unexplored regions of the marshes that border Sabine and Calcasieu Lakes. Finding a prime redfish pond that has no fishing pressure is like finding the Hope diamond in a gumball machine; it probably won't happen, but look out if it does.

Armed with aerial maps, topographical charts fly rods and other associated gear we set out in search of parts unknown, at least unknown to us. Our quest to find some un-pressured water was soon rewarded as the Maverick skiff came down off plane and settled into the dark clear water of a large marsh pond. In an instant we could see the wakes of cruising fish as well as the tails of some feeding reds. This place was full of potential and void of any traffic, we had found a jewel.

After a coin flip to decide who would take the poling platform first, I got the honors of casting to the first fish. A small group of redfish were gathered up and feeding intently as Ron pushed the skiff into range. At first I didn't know if I wanted to cast or take a picture, the redfish had their tails high above the water and they were backlit by the sun in an amazing display of red and copper. Much to my dismay the camera was still fogged up from the change of temperatures, going from the air-conditioned truck to the summer heat will do that. Without the camera option I was "forced" to go ahead and cast. The Orvis T3 7-weight fly rod loaded up and sent one of Begnaud's "Ron's Red Chaser" flies directly at the feeding fish. The cast was accurate and the redfish were receptive, the strike was almost immediate. The big redfish took plenty of line as the other fish scattered and muddied up the shallow water. The fight lasted ten minutes or so until the big red finally gave up. As Begnaud slipped the Boga Grip into the fish's mouth we both were amazed at the size of this bruiser. The Boga registered 12 pounds and the fish taped out at 33 inches, an extremely nice fish for the marsh.

The day continued to be good as both Ron and I landed more redfish in our own private little pond. The plan had worked perfectly and we were rewarded with great fishing and no pressure from any other boats. As a matter of fact we never saw another boat anywhere close to our area, truly amazing by today's standards. The effort we put forth to get away from the crowd is work that most folks are not willing to do. That little extra effort can mean the difference between fishing and great fishing. In almost every saltwater venue on the coast there are some out of the way places that receive little or no pressure, these places are the hidden treasures that many folks dream about. They are there for those who are willing to find them.

The day ended with a bang as Ron landed the final redfish and we headed for the dock. The endless maze of marshgrass-lined canals promised more fishing in the near future. Even though we had found a great new place to fish both Ron and I knew that surely there must be others in the same area. Over the hum of the Yamaha outboard in the background we both agreed that we would back, and soon.