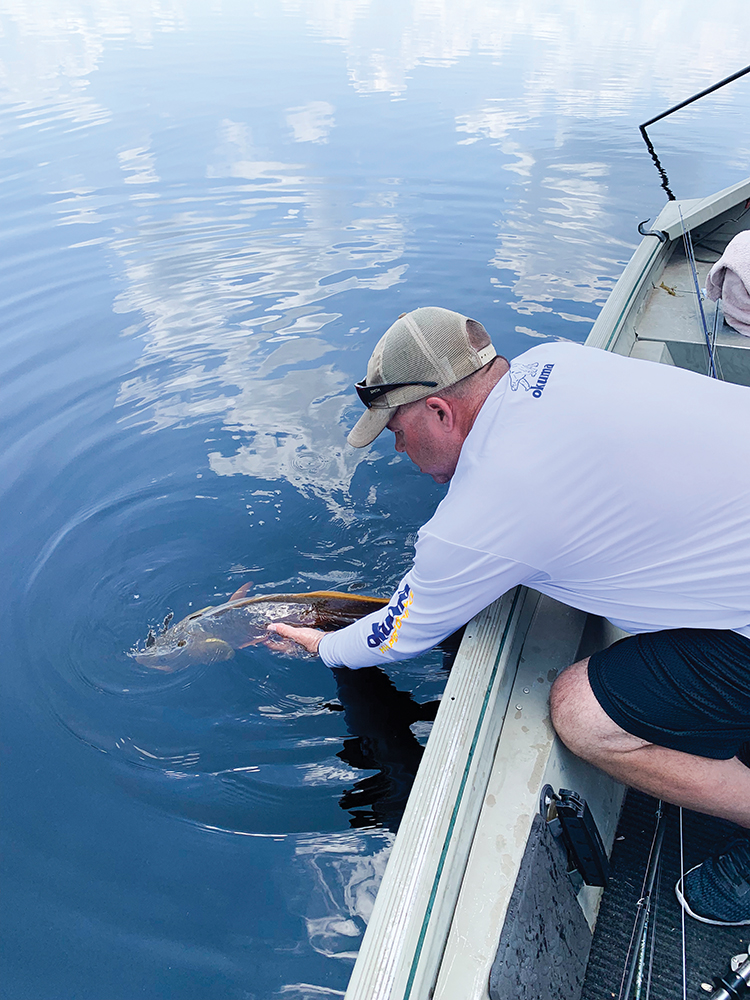 Released to fight another day.

Every once in a great while it happens, the stars align and things go exactly according to plan. On such a joyous occasion it would seem as though any and every fish in your vicinity is willing to eat any and every lure presented. Welcome to Nirvana, hope you have a great stay.

Now as this dream is shattered by the sound of you crashing back to reality, you suddenly realize that days like the aforementioned happen far less than their counterparts – the days when fish seem to only want one thing or one specific presentation. Anyone who has spent time chasing fish along the Texas coast has certainly run into this problem and suffered through some difficult days. I know I certainly have and they are no fun. When faced with conditions where fish get finicky you have to approach them from the most basic angle, and that’s finding whatever it takes to draw a reaction.

Getting a fish to react in a manner or entice them into biting can be as simple as getting the proper bait right in their face, seldom do fish pass up the easy meal and a strategically placed offering usually does the trick. Here is a classic example that I’ve seen play out dozens of times.

While poling around in shallow water I locate a redfish for the angler on the front of my boat. After maneuvering the boat into position for the angler to make a cast, the moment of truth comes and the cast spooks the fish, turning it into a finned and scaled version of a runaway train. The angler on the front of the boat stands there dejected and can only watch as the wake of the fleeing fish widens as it flees. At that moment I pick up my spinning rod and pitch a lure in front of the fleeing fish and it gets eaten almost immediately. I cannot tell you how many times I have seen spooked redfish inhale a bait while they were running from an area where they had been spooked; it happens with surprising regularity. It’s like a thief running away from a robbery and passing an ATM machine spitting out money; they simply cannot pass it up.

Now don’t get me wrong, there are times that the redfish ignore the bait but, more often than not they eat it. For years my go-to bait for this situation was a hollow-bodied tube jig rigged in weedless fashion. The tube jig was a great shrimp imitation and was easy to present in a subtle manner. I lived and died with the salt and pepper color pattern for years. Since the tube jig I went almost exclusively to a plastic frog, a Stanley Ribbit to be exact. The action provided by the frog’s kicking legs are almost irresistible to redfish and largemouth bass just the same. The frog has made believers out of many of my customers and it’s certainly one of the lures I never leave the dock without.

Recently I added a new bait to my arsenal that may well out-fish all my old standbys, especially when it comes to sight-fishing. Marker 54 Lure Company has come out with possibly the coolest collection of shrimp imitations I have ever seen. Joshua Morris from Marker 54 explained the concept to me and I was completely blown away at the actions on these shrimp. There are three models; the Jerk, the Glide, and the weedless. The jerk mimics a fleeing shrimp in the way it swims backward, the same as a shrimp flicking its tail. As if that action was not enough, the bait will actually “back up” to its original position, which affords the opportunity to fish a spot multiple times without the need to retrieve and make a new cast.

“I designed this shrimp to fish potholes in the grass,” says Morris. “You can snap the bait to the surface and it will back up, it’s like nothing you’ve ever seen.” I can vouch for that assertion personally, it’s amazing. In fact I spent about 20 minutes with my first one in a swimming pool and was mesmerized. All I could think about was how good this will do with sight-casting to redfish. The Glide model swims forward and the weedless version can be rigged forward or backward. This bait has quickly become one of my favorites because it’s perfect for many applications and it’s very durable. The Jerk shrimp has taken my finesse fishing to a completely different level.

Now what I’m going to talk about next may not be considered the finesse side of fishing to some but it certainly draws a reaction, and that’s sound. Call it noise if you prefer. We have all heard various plugs, lures, and rattling corks make all manner of racket and they will most definitely improve your odds of finding fish under certain conditions. Some anglers prefer a deeper tone while others tend to gravitate toward the high-pitch models. Personally, I lean toward higher-pitch lures when given a choice. Seldom have I witnessed a deeper rattle tone produce more fish than the same or similar bait with a higher pitch.

A great example is the difference between the MirrOlure Top Dog and She Dog. Both baits are solid producers but the higher pitch in the She Dog seems to draw more strikes for me. I remember drifting deep shell with Art Wright and big trout guru Mike McBride years ago when the She Dog was brand new. McBride refused to use it saying, “That thing sounds like a bunch of marbles in an empty coffee can!” Art and I caught fish on nearly every cast while McBride couldn’t buy a bite. I’m sure there are folks who can claim the exact opposite but the point is that the right rattle tone under the right conditions can certainly make a huge difference.

Perhaps the greatest lesson to take away from this article is that a basic reaction is a powerful thing and anything I can do as an angler to get a fish to react is exactly what I need to produce strikes on less than ideal days. Provoking a strike by tempting a fish with an easy meal or agitating them to the point where they want to kill a bait is all part of the puzzle that we strive to solve every day on the water. It’s exactly that which keeps us coming back for more.