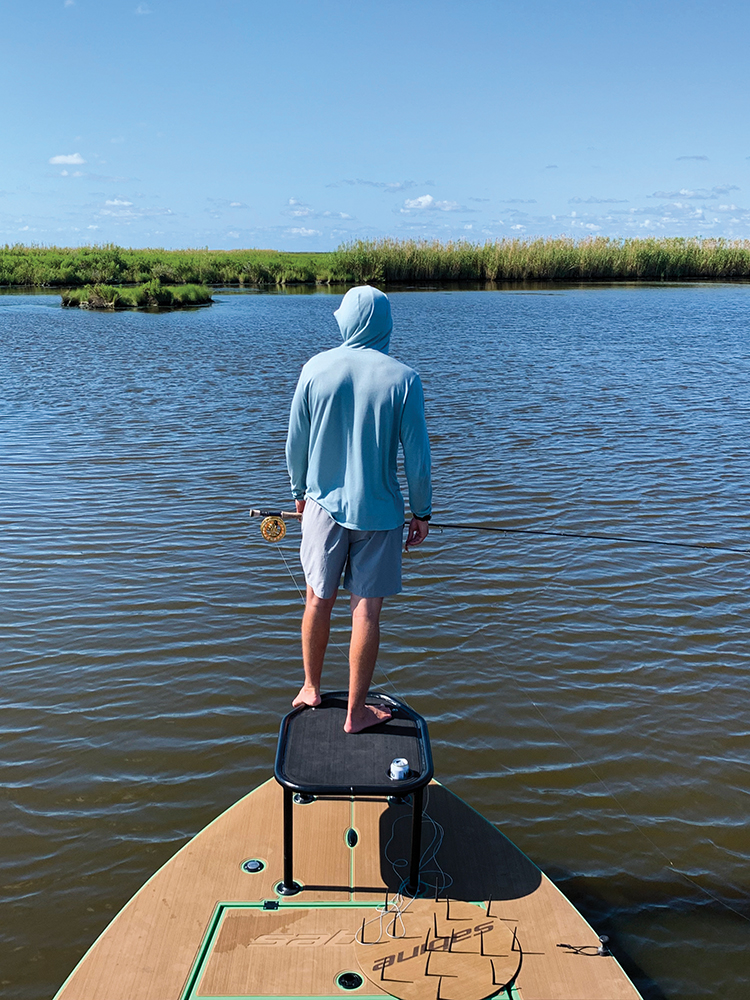 Veteran sightfisher Mikey Barber takes his time surveying a back lake before casting to a redfish.

As we flip the calendar each month it’s hard to resist letting your mind wander as you consider the angling potential the new month might hold. Very few months can compare to September when you think about potential because this is basically where it all starts for many fishermen. The long wait through summer’s dog days will be an afterthought and the good stuff is about to begin. September will usher in all sorts of wonderful variables that will kickstart some of the most amazing fishing of the year. The seasonally high tides send water gushing into coastal marshes sets the stage for shrimp arriving in the open bay with the first hint of north wind. The super-heated water that rendered most of the back-lakes regions near lifeless will be all but a distant memory as bigger tides wash away the frustration of the summer and usher in the prime conditions we have all been waiting on.

If there is one month that shows exactly how much Sabine Lake has to offer; it would be September. Easily, one of the most alluring features of the Sabine Lake fishery is the fact that you can catch so many different species in a relatively small area. The brackish water holds both fresh and saltwater fish in good numbers as well as quality. It’s never been uncommon to see a stringer of fish include flounder, redfish, speckled trout, and an occasional hefty largemouth bass. The potential for all these fish to be in the same body of water makes each strike that much more exciting because you never know who will show up to crash the party.

Speaking of not knowing who will show up; it’s really going to get interesting as the year progresses and we remain stuck in the generally dry conditions that have prevailed the past several months. In years past when we have had dry seasons with little or no significant runoff from either Toledo Bend or Sam Rayburn, a long list of visitors can be expected. Species such as jack crevalle, sharks, rays, and even tarpon will make the trek up the river as the saltwater slowly creeps farther inland. These party crashers often show up and make their presence known in the form of screaming drags and great “one that got away” stories. Nothing gets your attention like the prospect of getting spooled and actually having to chase a fish with the boat. In areas where lots of local anglers congregate it can be an absolute circus when someone hooks up with a stud jackfish in the middle of a small armada. The chase that ensues is like something from the Bourne Identity – boats weaving in and out, avoiding fishing lines and anchor lines. Nothing like the prospect of catching “the big one.” It’s why we fish.

As far as big fish go and areas where people congregate; you can bet there will be some great fish hauled in at the jetties. A few very dedicated anglers will take advantage of the ultra-early bite before the masses reach the rocks. Good tide changes a few hours before dawn is a winning recipe to tangle with some big fish, especially trout. There are very few strikes that are as vicious as speckled trout at the jetties on topwater plugs in the pre-dawn darkness. I used to wonder what those boats were doing, heading back to the dock as the sun was just breaking the horizon, until I got a chance to try out the pattern myself. All I can say is the reward is well worth the effort.

Now if fishing in the dark is not your favorite, don’t worry because you can still be successful during daylight hours with a just a small variation to the strategy. Topwater plugs worked in and around the rocks will still produce some fish after the sun comes up, but swimbaits will just flat wear those fish out.

There are several styles of swimbaits you can use and they all work. The conventional soft plastic swimbait with a paddletail is a great option, especially when fished on a light jighead to allow for a slower fall and more subtle presentation.

Other known producers to consider are the shallow-running crankbaits such as the Swimming Image, Mann’s 1-Minus, or any of the Rapala offerings. These plugs are really user-friendly and allow the fishermen the opportunity to probe the rocks to trigger brutal strikes from hefty speckled trout and redfish. Perhaps the greatest thing about all the swimbaits and crankbaits is that they allow you to cover lots of water in a short period of time, which definitely enhances the productivity potential.

As the transition from dog day heat to more pleasant fall temperatures progresses it is always fascinating to witness the changes in the marsh habitat. Lush grasses that began to die off in late-July and August made fishing the back lakes almost impossible as the dead grass matted up and forced fishermen to seek cleaner pockets of water. Every year we see this happen and every year, like magic, it seems the marsh comes back to life with the first big tide and full moon. The new water breathes life into an otherwise stagnant environment and all of a sudden the fish seem to shake off the summer doldrums and begin to eat anything that doesn’t eat them first. It’s absolutely amazing how fast it happens.

It’s hard to describe how childishly giddy I feel as I stare into September, months of anticipation and hope are amplified to the point of a sensory overload like no other. The coming weeks and months ahead will offer some of the greatest opportunities of the year for success on the water and we should all take advantage of every one of them. The long-awaited time has finally come…and not a moment too soon.