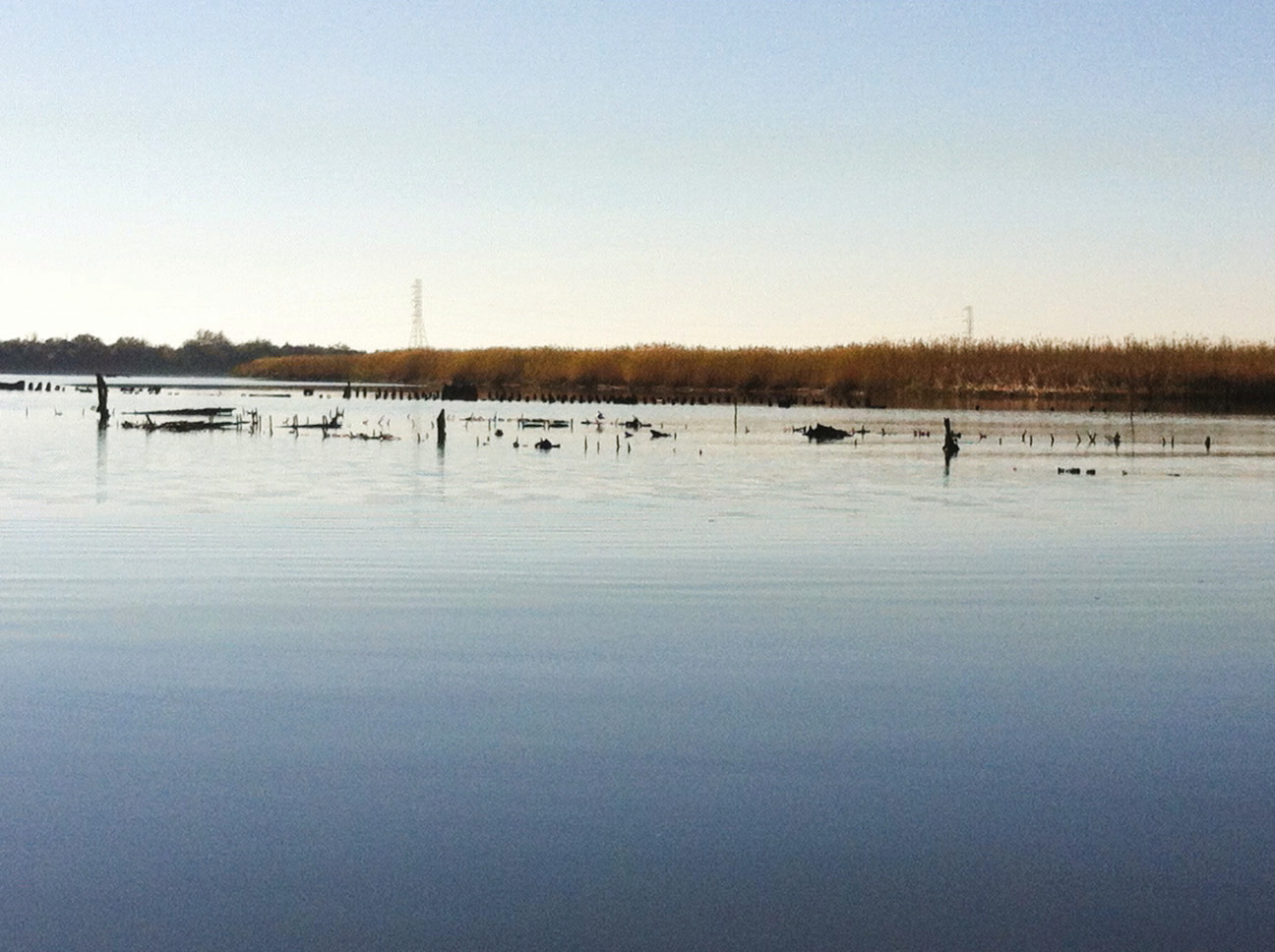 Ships graveyard on Sabine River. Old war ships they decommissioned and burned. Scary stuff!
For some unknown reason here in Texas we have an "adjusted calendar"; it appears that January and February have become more like winter months than November and December ever will. Waterfowl hunters and baseball players will each vouch for the weird weather in their own particular way. It seems as if the temperatures and conditions for shooting ducks and geese are much better the closer we get to baseball season. You have never seen so many heavy coats in all your life as you will at a baseball game in January. Conversely you would think you were at a baseball game wearing short sleeves the weekend duck season opens up in November. Texas winters are just plain weird.

When you speak of February on the Texas coast that means many different things depending on your location. The most obvious and well documented topic will certainly be the pursuit of big speckled trout. Anglers from all over the state and beyond will make the trek south to places like Baffin and Port Mansfield to search for that fish of a lifetime.

A little farther up the coast there will be a crew of devoted big trout chasers digging around the mud and shell of East Matagorda Bay every chance they get. Still farther up the coast the Galveston Bay complex will host plenty of anglers from the big city and beyond during those chilly February afternoons. And last but not least is the water I call home, Sabine and Calcasieu, two very unique places that can spit out big fish with just about any bay system out there. All of the afore mentioned bodies of water will be excellent choices for folks wanting to chase a big fish during what will most certainly be the coldest month of the winter.

Fishing during the cold months can be best described with the old "hero or zero" designation. Lots and lots of fishless hours go into the making of an epic, once in a lifetime day on the water. Anglers who earn their stripes by being persistent and willing to tangle with less than desirable conditions can sometimes be rewarded for their efforts with what can only be described as "heaven on earth" for a saltwater fisherman. Every year the "underground" anglers, those who seek to stay out of the limelight and keep fish tales to themselves, invariably stumble upon the mother lode of great fish.

Slowly but surely though the information leaks out to the cyber world and then the stories begin to surface of these days that only the average guy could dream about. You know the stories, the ones that make their way around the boat shows and allow the fish to get bigger each time the story is told. Regardless of the location, number of fish or size, all these incredible days on the water have one thing in common and that's the fact that someone or a group of someones were willing to go do whatever it took to catch those fish. That's the kind of attitude it takes in the wintertime.

Now I know as well as you there have been countless articles dedicated to the pursuit of big trout in the winter, ones that cover lures and presentation, areas to fish, and other variables. All of these articles have some great information but all too often they continue to repeat the same things over and over. As anglers we have to adapt from time to time, change up our approach in order to discover new and better ways to catch fish. This is where you have to be "bold in the cold" sometimes.

Perhaps the easiest way to change your approach to chasing these big fish in the winter is to try a different lure or perhaps a different presentation. Over the past several years I have really become fond of crank baits and jerk baits, especially over shell. I have found that theses baits work really well under these circumstances and are really user friendly at the same time. Lipped crank baits and stick type jerk baits that will go down and rattle around in shell or mud and stay at a certain depth on retrieve are perfect choices for winter fishing. The side to side wobble and noise that the plugs emit are perfect for drawing reaction strikes from less than enthusiastic fish. The crank bait is also a great alternative to other slow suspending baits that are more difficult for less advanced anglers to use. The feedback you receive from the plug while retrieving is instant and the results speak for themselves. One other bonus is the fact that if you break off a plug in shell it often times will float to the surface where it can be retrieved. Try that with another plug.

Running a crank bait or jerk bait along shell, rock, or other obstructions is a style of fishing that comes straight from fresh water fishermen. The technique of bouncing that plug off of underwater obstructions and letting it float back up will produce some of the most vicious strikes you can imagine. I routinely take crank baits and throw them around pilings and rocky shorelines in Sabine and just absolutely hammer redfish and trout that are lying near the structure but out of the current. The strikes almost always come after the plug bounces off an object or is stopped and allowed to float upward. Those fish just pound these baits, it's vicious.

For some anglers it's just too much to ask them to change plugs and their way of thinking, that's why every chance I get when fishing with other people I experiment. Get two or three people in the boat or along a wade that start catching fish on a regular basis, this is the perfect time to see if the fish will eat something else. By proving you have fish in the area with other plugs it makes it easier to see if those same fish will eat another offering. Sometimes this type of experimenting will really produce eye-opening results. Sometimes it doesn't work and you have to go back to catching fish the old way which is a great problem to have if you know what I mean.

As amazing as the fishing can be in February the potential for real world problems is always there as well. Colder water temps, fewer boats to offer assistance in case of emergency, and any number of other dangers await us during this time of the year. Perhaps the most dangerous is low water and the underwater obstructions that are now closer to the surface during the winter months. With tides routinely running low and a more constant north wind blowing water out of the bays it's not uncommon to find that navigation is much more treacherous. The potential to run aground or run over something is multiplied and that can be a life threatening accident in the colder weather. Stay very aware of water depth and keep an eye out for potential hazards. And by all means wear your PFDs and always tell someone where you will be in case they need to come looking for you. Take care and enjoy the opportunity, it may be a trip you remember for a lifetime.