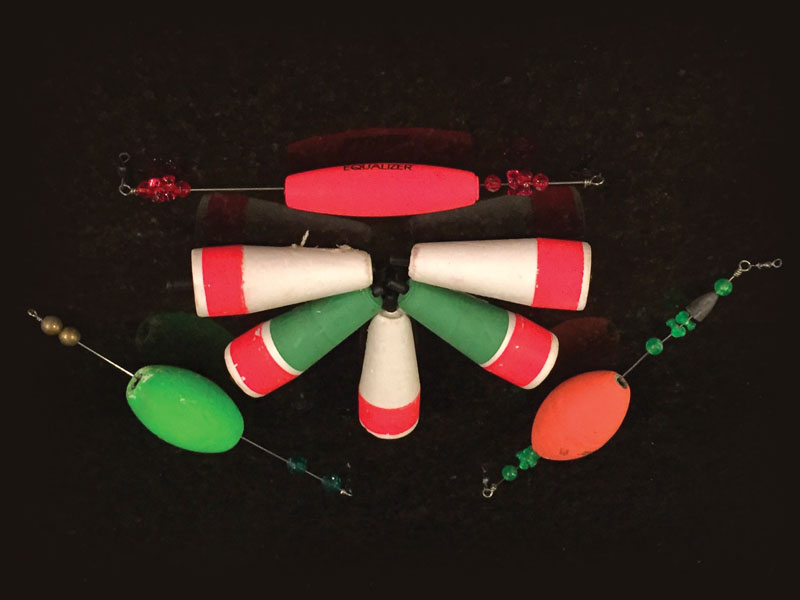 Corks come in many flavors and sizes. They all catch fish and they all have a place in the saltwater arsenal.

Without a doubt one of the most instantly recognizable pieces of fishing equipment ever invented has to be the cork. It's probably a safe bet that most of us can remember our very first fishing experience and it is highly likely that it includes a cork of some kind. I can vividly recall spending hours staring at a red and white cork as a kid, patrolling the rice canal that wound its way through my neighborhood. That shiny Zebco 33 spincast rod and reel adorned with a cork, a couple of pinch weights, and a shiny gold hook were the go-to combination for everything from panfish and catfish to largemouth bass and occasional alligator gar.

The cork symbolized fishing to us as kids and it still does many years later. The sight of a cork being pulled under by a fish and the feeling one gets watching this happen conjures up so many things we love about the sport.

Unfortunately nowadays, for many saltwater folks, the use of a cork somehow unjustly correlates to a lack of fishing skill or prowess when nothing could be farther from the truth. Yes, many novice fishermen get their first taste of fishing using this simple and ingenious device but it goes much farther than that. The use of a cork can be one of the most productive methods of catching fish and covering water any fisherman could employ. In today's high-tech world the cork has been revolutionized and improved upon but the basic concept is still the same. To blatantly borrow from the iconic Oldsmobile ad, "This ain't your granddaddy's cork!" To understand just how handy the cork can be we need to look back and realize just how far these fish catching tools have come.

The standard old Styrofoam float with a peg through the center to adjust the depth of the bait remains a mainstay even today. For years we used a non-weighted #3 Styrofoam cork with a half-ounce slip sinker a few inches below, resting against a barrel swivel. Attached to the barrel swivel was a piece of leader and a hook. The non-weighted leader section allowed a bait to swim naturally. The half-ounce sinker pulled the cork down to just the right depth to make it easy to pop or gurgle across the surface. That "good" sound produced by the "mouth" of the cork was and still is a terrific fish attractor. Curious fish drawn to it find a frisky bait swimming on the hook – and you know what happens next.

This technique was made popular on Sabine by a super-knowledgeable guide named Robert Vail. Robert used a larger version of the model described above because he targeted big redfish and used much heavier rods and reels. The first time I fished with Robert I felt like I was pole vaulting when I popped that cork with his 7 foot rods and big Abu Garcia reels. Dickie Colburn and I got together and downsized the rig for use on lighter tackle and soon learned to enjoy the technique even more. This setup is a proven winner and one of my favorite ways to fish live bait.

Back in the early-80s, Port Mansfield fishing guide Bob Fuston put an iconic twist on cork fishing with his famous Mansfield Mauler. Fuston started with crappie floats on heavy monofilament leaders to enable clients to keep their plastic lures suspended above bottom grass, and then progressed to a short length of stiff stainless steel wire. He later added beads for the signature click-clack of the Mauler. The Mauler became an overnight success–because it worked–and before long Maulers (and a host of imitators) were being used everywhere on the flats from South Florida to South Texas.

Many times the cork itself will draw strikes, instead of the lure or live bait suspended below. I recall several occasions where oversized redfish attacked and mangled our corks, but of course they got away because the cork had no hooks. Longtime friend and great fishermen Johnny Cormier solved this problem by adding hooks to the floats on Mansfield Maulers and those big blowups became hookups!

If the old saying is true, "Imitation is the sincerest form of flattery," then somewhere up in Heaven, Capt. Bob Fuston is smiling because there are certainly plenty of variations of his Mansfield Mauler on the market today. The shape and size of the corks on the imitators run the gamut from thin to fat with concave to convex tips. The wire the corks slide on has been altered too. A number of them use coated heavy gauge, multi-strand stainless wire to avoid the kinking issues of the originals, while the Double D Rattling Cork is built on an even stiffer, solid wire. I have used several of each with excellent results.

In today's redfish tournaments, your average angler might be surprised at the number of top competitors using rattling corks to both locate fish during scouting and also on tournament days. Several models will do the trick but perhaps the ones that opened my eyes widest were the concave tops and their resounding "sploosh" when jerked vigorously. I find the flexible wire leader designs to be exceptionally user-friendly.

Speaking of leader material – I have learned through trial and error that extra-stiff leaders below the corks greatly reduces tangles during casting. The stiffer leader also resists abrasion and other stress related failures when a prized fish is on the line. I have seen anglers using light leader material, perhaps to increase lure action or maybe because that is what was at hand, but I do not recommend this.

Now aside from the obvious ways corks can be used, there are others we seldom hear about. Jetty anglers use corks to suspend baits and lures above the hazards of the rocks. Many days I have watched as cork slingers just vacuumed a stretch of jetty rocks, doing a number on sheepshead. Several I know have taken the technique to riprap and other shoreline stabilizing materials when targeting flounder here on Sabine. The ability to probe small spaces where flatfish lie in ambush makes the cork a perfect tool for the job. I have also seen fly-rodders using corks, although they insist it is a "strike indicator."

Catch Cormier and I were fishing a stretch of rocks on Sabine River with fly rods when he brought out a contraption I'd never seen. He called it a VOSI Rig. I called it a cork.

Catch had taken a small pencil bobber, cut it in two, and dug out a small cavity on one end. This he attached about 18 inches above his fly and cast it near the rocks, giving it a gentle twitch every foot or so. The third twitch, a spunky bass pulled the VOSI under and the fight was on. I watched Catch take several more fish until he finally relented and showed me the setup – a wonderful example of Cajun ingenuity.

When I asked what VOSI stood for Catch replied, "Vertically Oriented Sight Indicator." I laughed hysterically as he explained that in his fly fishing columns, the word "cork" would immediately turn his audience off, while VOSI was readily accepted. Once again we get to the popular misconception surrounding the highly versatile and commonly looked-down-upon piece of fishing equipment called a cork. I rest my case.