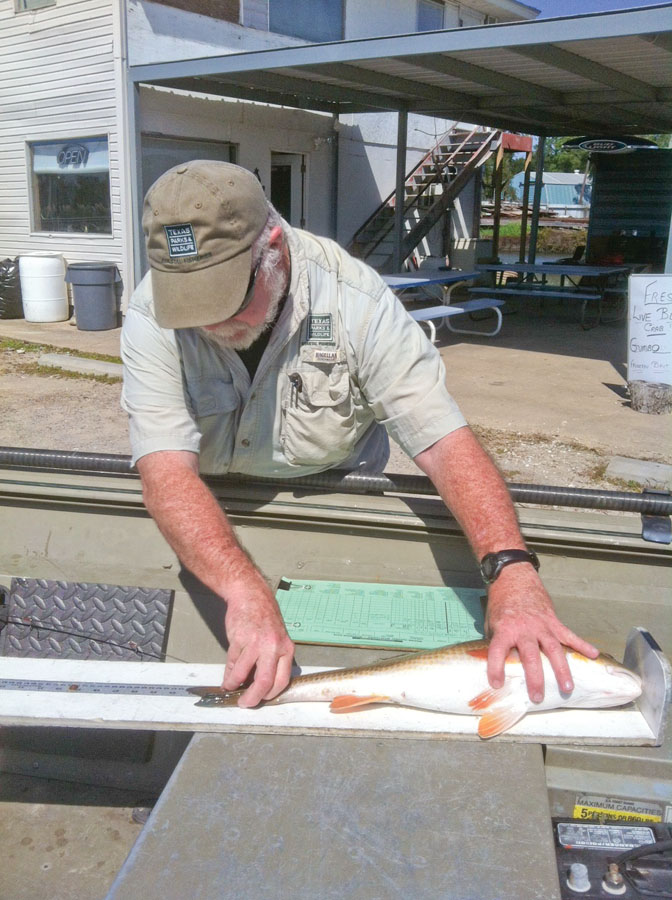 For those not familiar with the term lagniappe (pronounced lan-yap), it is defined as a small gift given a customer by a merchant at the time of a purchase; broadly: something given or obtained gratuitously or by way of good measure. In everyday terminology a little something extra would sum up the definition of lagniappe quite well.

At the present time it would appear that Sabine Lake anglers are in for a big dose of lagniappe during the month of December and continuing into the New Year. Water conditions are about as nice as one could ask for considering the date on the calendar, and that will add bonus days to the fishing year no doubt.

Traditional patterns normally have all but the most hardcore fishermen stowing their gear until spring as water temps plummet and clarity resembles a stale Yoo-hoo. On those occasions where everything lines up right and the factors that influence fishing turn in the favor of the fishermen, the winter months can be absolute magic. Its no secret that Sabine is at the top of the list as far as variables go when you talk about the factors that influence fishing success. Very few if any bodies of water along the Texas coast are subjected to such a wide array of elements as Sabine. The biggest influence being the amount of freshwater runoff thats received from the Sabine and Neches rivers the watershed for these rivers is huge. With so much fluctuation between fresh and salt water, the fishery both benefits and suffers at the same time. Too much of either changes the makeup and thats where things get nasty. Just the right combination of the two and Sabine is a paradise with something for just about everyone.

Now most anglers know the drill during the winter months when rain is scarce and the water in the bay gets almost too clear to be believed. Subtle color changes will often lead anglers to productive areas where fish will tend to congregate and ambush their next meal. The mouths of small marsh drains, shallow points that protect pockets of water from the wind, eddies in tidal current, and places like this will offer up color changes and prime holding spots for fish during winter months. On one epic day in December I saw this firsthand as I staked out a small area near a marsh drain where clear water met dirtier wind-blown water in the lake. It was incredible to watch as each time my topwater plug crossed the color change it was inhaled by a big trout or redfish. They must have been stacked in there like cord wood eating everything that came out of the marsh, it was unreal. If you just worked your plug in the clear water you never drew a strike. Staying in the murkier water would get a strike every now and again. Crossing the line between the two was absolutely money.

Speaking of money, as outdoor enthusiasts we foot the majority of the bill as far as taking care of our natural resources. The Texas Parks and Wildlife Department does an outstanding job monitoring our game and fish. Texas is usually on the cutting edge when it comes to conservation and supporting programs that ensure we will have game to pursue for years to come. Now dont get me wrong, on occasion they make some unpopular decisions that upset the masses but for the most part they do a really good job. Some of the most basic data they collect is at the boat launch with creel surveys. I often see anglers choose not to participate in the survey and thats certainly their option because the survey is 100% voluntary. I usually do my best to participate each time they ask and I often learn a little something along the way. The folks from TPWD are always courteous and more than happy to answer questions if they can, so take advantage of the opportunity next time you see them at the launch.

Looking ahead for the coming weeks as long as we stay dry and dont get inundated with rain, there will be a few really solid patterns working. The action under the gulls in the main lake will slow down somewhat but it will still be an option. Wade fishermen will keep a close eye on the weather as each successive front will present a window of opportunity that only a few brave souls will take advantage of. The warming days after the front will push big trout into the shallows and onto the flats in search of a super-sized meal that will tide them over for a few days. The numbers of fish wont set the world on fire but the size and quality will more than make up for that.

For the less adventurous angler, the friendly confines of the Sabine River will be a great alternative. The key to fishing the river is to incorporate some of the freshwater techniques such as crankbaits, drop-shots, and using quality to electronics to find suspended fish. Covering lots of ground is the name of the game until the pattern is solidified, then its just repeating the pattern in different areas. Once you find fish at a certain depth its much easier to key in on specific locales. Rat-l-traps, Hoginars, and swim baits will be top choices for probing the river in the winter. Redfish should be plentiful as will the trout if the salinity stays up. The bonus fish will be the striped bass that will make an appearance and really stretch your string once you get hooked up. The great thing about fishing this pattern is that you have a great shot to catch all these different species of fish in the very same areas as well as a largemouth or two for good measure. Thats probably the coolest thing about a brackish water system like Sabine, variety and multiple species are an everyday occurrence.

One other thing to pass along would be to certain your hardware, hooks, split rings, and other gear is in tiptop shape this winter because thats usually when that fish of a lifetime makes an appearance. Nothing is more sickening than to lose a fish because of faulty gear its your own fault and you know it. On those really nasty days when you elect not to get out on the water its always a good idea to take care of those things you put off, like changing hooks and other chores. I recently got a really cool pair of split ring pliers from Texas Tackle and they make that chore much easier. This pair of split ring pliers is smaller than normal pliers and they are spring loaded which makes them very easy and comfortable to use. The smaller points on these pliers offer up a little more precise bite which takes the time out of wrestling those split rings with bulkier models. Swapping out hooks and hardware on older plugs can come in handy when a color is sold out and hard to get. We all know the frustration of going to your favorite tackle store to pick up the must have bait of the season only to find empty racks. If you have an older bait of the same model you can just refurbish them with new hardware and save yourself some time, money and hassle.

I personally want to thank all of the readers of TSF for all their support and hope that each and every one of you finds that fish of your dreams and has a happy and blessed New Year.