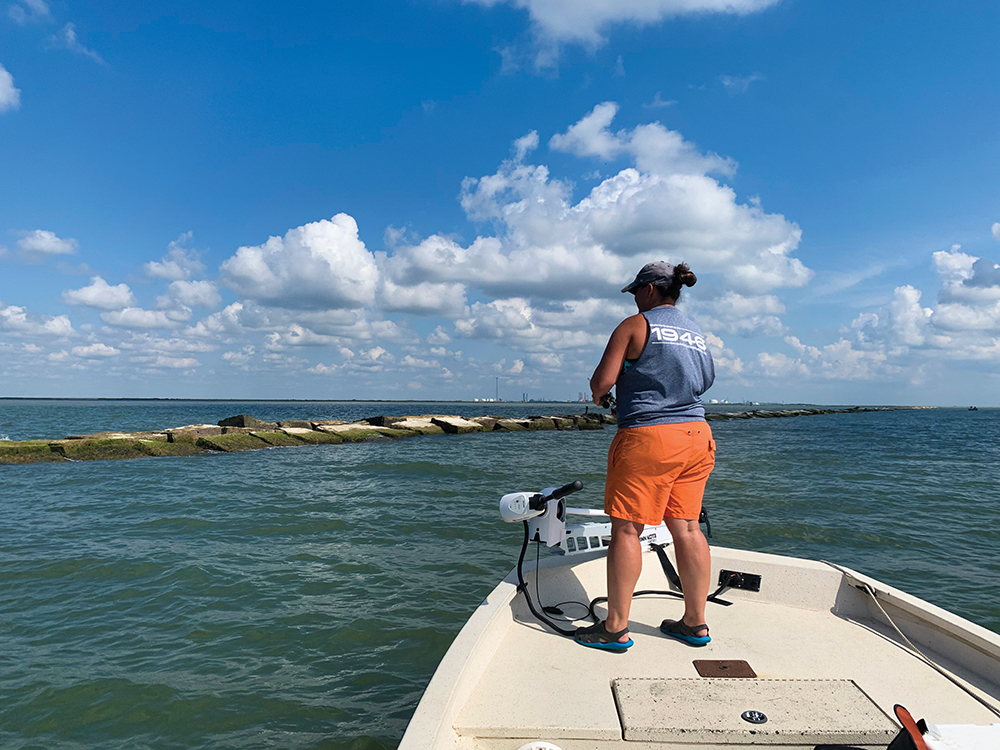 Anglers working swimbaits along the Sabine jetty rocks have been enjoying excellent catches.

If asked to sum up the current state of affairs on either Sabine or Calcasieu, I would quote one of the most popular Beach Boys songs from the 60’s; “She’s giving me good vibrations.”

It’s no secret that Mother Nature has not been kind to these border estuaries in recent years. Thankfully, it appears the bad luck is finally in the rearview. Let’s hope it stays there.

Both Sabine and Calcasieu took an absolute beating for a couple of seasons from a combination of floods and abnormally cold temperatures at the worst possible times. These two ultra-productive bodies of water, known for both prodigious numbers as well as the size of fish historically available, were relegated to the back-burner of angling interest when fishing success began to sour.

I’m not going to lie to anyone or pretend that I was comfortable with the situation at the time because I was far from that. I was downright worried that I had seen the last of the good times until there was a little spark of life, like a soap opera scene where the patient comes out of a coma and the plot suddenly takes an unexpected twist. The first signs of rejuvenation appeared last fall on Calcasieu when schools of open-water specks under feeding birds became more common. As that pattern began to emerge more fully there was cautious optimism that things were headed in the right direction.

Fast forward to this past spring and all of a sudden some really good catches began to show up on the south end of Calcasieu, and then a few folks on Sabine began to run into some nice fish as well. As in years past Calcasieu was ahead of Sabine when it came to recovering from a weather event and so far that has been the case again. The patterns enjoyed by anglers on Calcasieu earlier in the year are now beginning to pay dividends on Sabine as both bays are enjoying some outstanding fishing, particularly on the jetty systems and in the ship channels. So far this year the program “down at the rocks” has easily been the most consistent game in town for many species, especially speckled trout. Just knowing that the numbers of fish and quality fish are again showing in good numbers has been a shot in the arm for Sabine anglers that prayed earnestly for a rebound.

Current conditions on Sabine thus far are about as good as we have seen in quite some time. Toledo Bend and Sam Rayburn have been relatively quiet as far as water discharges is concerned. Freshwater flow that was so heavy and detrimental to the saltwater species has been average to below average for much of this year and that has allowed some much needed salty tides from the gulf to enter the picture again.

Just recently I was out scouting along the north end of Sabine Lake and ran into a group of dolphins feeding about a mile south of Coffee Ground Cove. As always, the encounter with dolphins was very cool to watch but seeing them so far north after such a long absence was extra special. The experience gives me hope that better numbers of trout will soon follow and things will begin to resemble something more akin to the old normal.

In the meantime, while we wait on the water conditions to continue to improve, the best bet in town for consistent action will be the southern half of both Sabine and Calcasieu. So far the best bet for me in these areas has been a combination of one of three different presentations. Early morning and late afternoon has been really good for folks throwing topwater plugs along the rocks at the jetty or over some well-defined shell in the ship channels. Once the sun gets up its time to switch to a rattling cork and soft plastic while making long drifts in cleaner water near the rocks. If the rattling cork is not your preferred method, the next best thing is throwing a swimbait parallel to the jetty rocks, which is one of my personal favorites.

Swimbait selections fall into a couple of categories; hardbaits like the Swimming Image, square-billed crankbaits, and soft plastic versions like the Mullet Run from Marker 54 Lures. Either selection will work and will definitely catch fish but the soft plastic version is by far the most versatile in my opinion. The new Mullet Run has been very good for me and can be fished on a 1/4-ounce jighead or rigged on a weedless-weighted wormhook to better probe the rocks and shell with fewer hang-ups. The great vibration created by the Mullet Run’s tail and the natural scent impregnation are true game changers when you get on this pattern.

For the most part, both Sabine and Calcasieu are making up for lost time and appear to be more or less on the road to recovery. If there is any significant negative or drawback at this time it has to be the shape of the surrounding marshes and the explosion of vegetation that has taken over in many areas. I have never seen the grass so thick in so many areas to the point of making hundreds of acres of water virtually impossible to fish. Right now there are very few ponds or lakes that are clear enough to fish and that’s a bad thing because the pressure in those areas will be off the chart. Other areas in the marsh are dealing with some sort of salvinia bloom that has just shown up out of nowhere.

Hopefully, the improvement in salinity that is becoming more prevalent will help equalize things and get the vegetation back under control. Until that happens all we can do is wait and watch. All in all, the outlook for the rest of the summer is as good as it’s been in several years and steadily improving, which is sweet music to many fishermen’s ears.