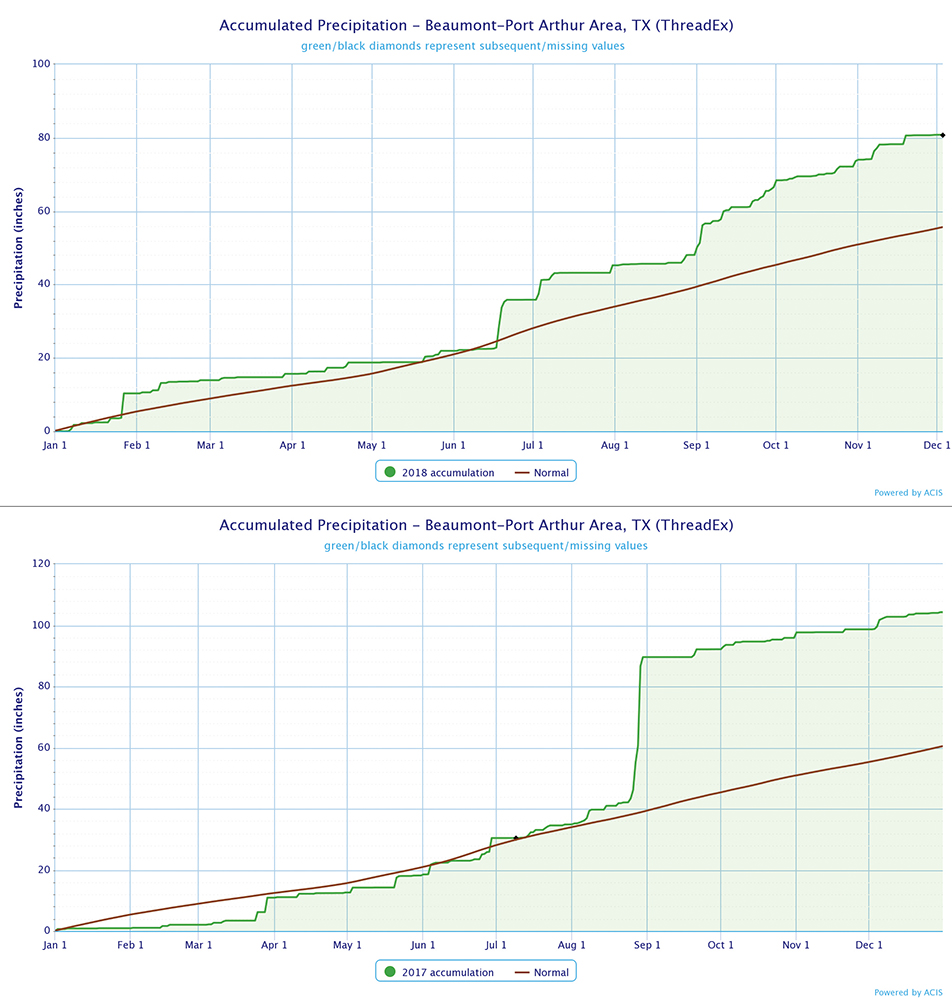 Two years worth of rainfall in 15 months has greatly contributed to the scarcity of speckled trout in Sabine Lake.

Okay, here we are at the end of another year and predictably there will be several “2018 in review” stories in which the highlights of another great season of fishing will be retold and highlighted. As in all my years with Texas Saltwater Fishing Magazine I will not be following the conventional trend where I tell you how fantastic everything was on Sabine and Calcasieu. In fact I’m going the completely opposite direction because I want to forget 2018 as soon as I can. I have no reservations in describing 2018 as the worst overall fishing year that I can ever remember, especially on Sabine. So, so long to 2018 and good riddance.

Beyond any shadow of doubt the two greatest factors that have influenced the recent fate of Sabine and Calcasieu lakes have been the unprecedented amount of fresh water runoff and inflow combined with a much colder than normal winter from 2017 to 2018. Without question the only bay system in the state that could have possibly handled the sheer amount of fresh water inundation experienced on Sabine Lake was Sabine Lake. The Galveston Bay system would have probably handled the volume of fresh water due to its size and enormous communication with the Gulf of Mexico but that’s the only reason. My home county of Orange is steadily approaching 90 inches of rain for 2018, that’s 30 inches above normal in just one county. The Sabine River water shed encompasses dozens of counties and it’s a safe bet most of those will also be above normal on rainfall this year.

Taking a look back to the disaster that was Hurricane Harvey, you can document where the downward spiral began. Harvey hit during what most consider the beginning of the fall run, late August and early September, and that was the first big blow to the fishery. Once the rains stopped, the next round of disaster came from Toledo Bend Reservoir as they opened all the flood gates in an emergency effort to drop the lake level to a safer level. Again a massive freshwater influx comes in and wreaks havoc on the entire system. The massive amount of water released from Toledo Bend was perhaps worse than the local rainfall from Harvey because of the fact that it spanned such a long period of time. In years past we have learned that Sabine clears up much faster after local rainfall versus heavy runoff from the lakes, Toledo Bend and Sam Rayburn.

Flip the calendar page and get into 2018, high hopes for the rebound on Sabine take an early hit as rains in late January continue through March to put the local rainfall above average for the first quarter. The above average rainfall continues and really gets cranked up in June and goes off the chart in September and October, leaving local fishermen wondering if it will ever stop. Locally the fishing never got going to any degree where you could truly feel like you were going to catch fish on consecutive days. The huge amount of fresh water would concentrate fish, specifically speckled trout, in small areas and they would seemingly disappear overnight. That pattern would continue and in fact get worse before it got marginally better.

Now I know that thus far I have painted a bleak picture and not many folks like to think about how bad the fishing has become but it’s just a simple and undeniable fact of life right now. Perhaps the scariest bit of information surrounding the saga of “where did the trout go?” is the fact that even Texas Parks and Wildlife net surveys struggled to catch speckled trout this year. Most folks, including myself, had hoped everything would get back to some sort of “normalcy” during the fall when everyone expects the birds to work, specks to school, and shrimp to be everywhere. Unfortunately none of the normal things associated with fall fishing happened. The absence of trout has caused quite a bit of concern throughout the fishing community and that sentiment will continue to grow until things change. A great barometer of the state of Sabine is historic tournament results and that were way off the pace this year. I saw several high profile events that normally have winning trout weights of at least seven pounds won by fish that weighed barely three pounds. Hopefully something in the near future will change and change in a hurry.

Just like the old saying that every dark cloud has a silver lining, this year’s bright spot had to be the numbers of redfish that just absolutely saved the day for many anglers. The redfish bite was far and away the most consistent program that we had on Sabine. Classic patterns worked on the redfish day in and day out, once you located one fish you could usually expect to find more. Early in the year when wade fishermen were stalking big trout on shallow flats they found more oversized redfish willing to crumple a Corky than they found big trout. As summer rolled around the big schools of redfish provided plenty of opportunities for anglers willing to cover water. On more than one occasion I ran into schools of redfish all by myself in the middle of the lake and, truth be told, I was incredibly thankful to find them. Had the redfish not been so prevalent I’m sure there would have been plenty of bay boats for sale in our area. For all those guys that talk bad about catching redfish it’s time to be thankful because without them the past year would have been a complete disaster.

For as long as I have been writing for TSFMag I have always stressed the fact that the Sabine area is incredibly hard to pattern and always changing. This period that we are in right now is unprecedented and is certainly cause for concern. The long term remedy for the situation is some help from Mother Nature in the form of weather that resembles normal. Will we get some cooperation from the weathermen…who knows?

All we can hope for is a return to normal salinity in this bay system for an extended period of time, and hopefully the fish that fled the floods will return from the gulf. Where else could they have gone? I cannot recall the level of concern from so many in the fishing community over the fate of our home waters. Here’s praying for a “normal” 2019.

I personally want to wish all of our readers a happy and prosperous New Year – and better fishing!