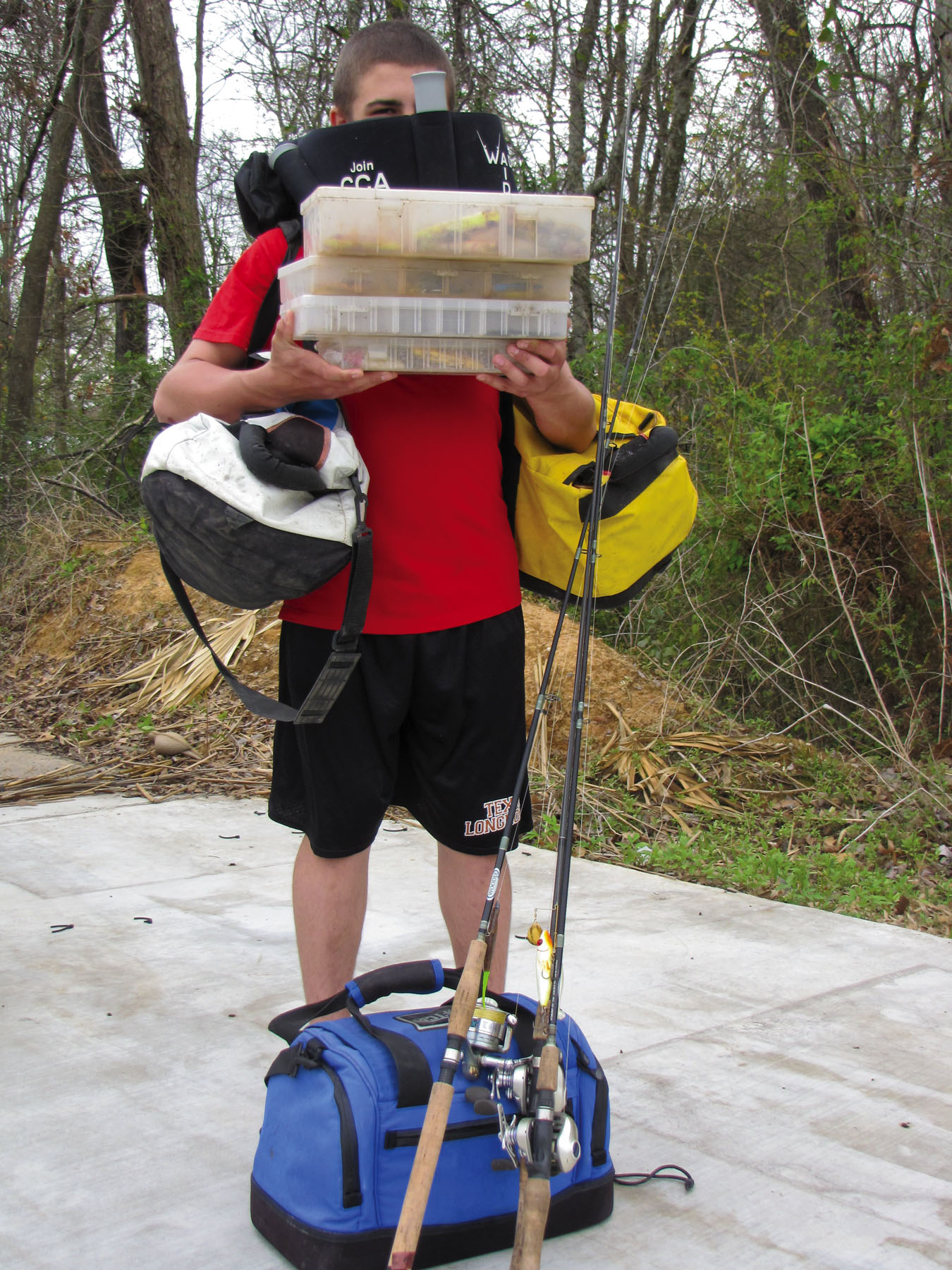 How much tackle is too much??

Several phrases come to mind concerning the amount of tackle and gear that some customers and even a few friends insist on bringing aboard my boat and I have uttered the one above more times than I care to remember. "Holy ----!" and "You gotta be kidding!" are also applicable here.

It seems some folks could use a skycap to check in their fishing luggage or maybe I'm going to have to take a page from the airline playbook and start charging excessive baggage fees. The question of why your average bay boat has grown so large is likely traceable to anglers that insist on carrying lots of stuff on fishing trips the word "stuff" being used to describe that mountain of tackle in your garage that seems to get bigger each year and that you must take with you every time you go. Seriously, it just absolutely boggles my mind when I look at the stuff some anglers carry around, it's enough to make Academy, Fishing Tackle Unlimited, and Gander Mountain blush with envy. No more, I say. It's time to lighten the load.

A typical morning at the launch with three customers begins with pleasantries and is filled with optimism for a successful day on the water. Most anglers bring their own tackle and gear and this is where it starts getting sketchy. The first client walks up to the boat carrying four rods and a mid-70s vintage hard-sided tackle box, roughly the size of your average end table. Okay, no problem. I slip the rods into holders and slide the coffin-sized container into one of the large storage boxes. The next guy is a little better due to the fact that he brought only three rods and at least packed his other stuff in a soft-sided bag. Only problem is, he brought three of these too. The third hopeful fisherman has it wired; two rods and one medium-sized bag very neatly packed and organized. A perfect assortment of tackle for a day on the water compared to the other two guys who give the impression they were going fishing with Noah; enough gear for forty days and forty nights.

Now you ask, "So what's the perfect assortment of tackle?" Obviously it differs from angler to angler, but the quantity is what gets me. When you pack the entire catalog of your favorite soft plastic baits, this is where I draw the line. Four or five storage boxes of just topwater plugs is another mystery I have yet to figure out. Unlike our brothers who frequent freshwater lakes and similar venues, we don't need all the clutter. I have several really good friends who routinely fish high-end bass tournaments and I get blown away every time I start digging around in their boats. How in the world can one fisherman fill up all the storage space on a twenty foot bass all by himself? It's just crazy in my opinion. I understand that conditions can change and techniques need adjustment during a tournament, but bringing everything to fish with including being able to drop-shot for Nile perch is a bit extreme.

Let me preface this next statement as my opinion and my opinion only; "The well prepared angler can and will be more successful with a pared down version of their tackle." By answering a few simple questions and taking a no-nonsense approach, you would be amazed at how little gear you actually need to carry. One of the biggest wastes of space in my opinion is a rainbow assortment of soft plastics. The old saying that lures catch more fishermen than fish is gospel in my book. Crazy trendy names that become buzzwords on internet forums provoke normally sane individuals into across-town treks in search of the newest magical color. Instead of carrying the whole spectrum of colors, try and divide your baits into dark and light and stick with the most consistent producers. The vast majority of the time, if fish are eating a dark color like pumpkinseed or root beer, you can substitute another dark color and be just as effective. I know I will get all kinds of e-mails from folks swearing, "The fish would only take a Dipsy Wiggler with three red dots," and I understand that can be the case every now and again. But, day in and day out, there are way more factors that determine success than lure color. If we as anglers paid more attention to the subtleties of tide, wind, temperature and presentation, the color debate would a distant afterthought. Instead of throwing our attention towards a magic bait that will catch them when all else fails, we should try to amend our approach and concentrate on other, much more important, factors.

So, toward the goal of lightening your load and streamlining your stuff, I would like to offer a few suggestions. Usually, in saltwater, the folks who throw artificials most of the time spend the majority of that throwing soft plastics. With that in mind keep a decent supply of major colors in various sizes. For me that consists of bone, chartreuse, glow, and salt and pepper. I keep a few short models for bottom bouncing and a few of the longer five inch versions for swimming. Darker colors like black, grape, pumpkinseed, and red, take care of the other side of the color spectrum. Jighead sizes vary by location but the two that fit the bill most often are 1/4 and 1/8 ounce. Farther down the coast the sizes tend to get lighter but that's almost a special situation. The 1/4 and 1/8 will take care of most applications and should be the bulk of your supply.

Hard baits like topwaters and sinking plugs can also be divided into colors and sizes. I make mine simple by going black, bone, and a natural shad or mullet color. Hard to go wrong with that theory in my book. A few different sizes from Super Spook to Spook Jr. will help you match the bait in the area you fish. With that in mind I always tend to lean towards smaller than larger, this is why the MirrOlure She Dog and She Pup are my favorites. Same goes for Corkys and other slow sinkers, presentation in my mind is far more important than color.

A small collection of spoons, spinnerbaits, and a few rattling corks will cover most of the other bases left open. Now you have a great variety of baits that will be the building blocks of the perfect tackle bag. Not too much clutter with just the right amount of variety. Bear in mind that I too was once guilty of carrying way too much gear. I now enjoy taking only a handful of lures and being able to concentrate on catching fish rather than trying to decide what bait to throw next. Take an honest inventory of the lures you use most frequently and how well they produce for you, keep them handy and cull the rest. The lighter tackle bag will be a welcome surprise for you, and certainly to the folks you fish with.