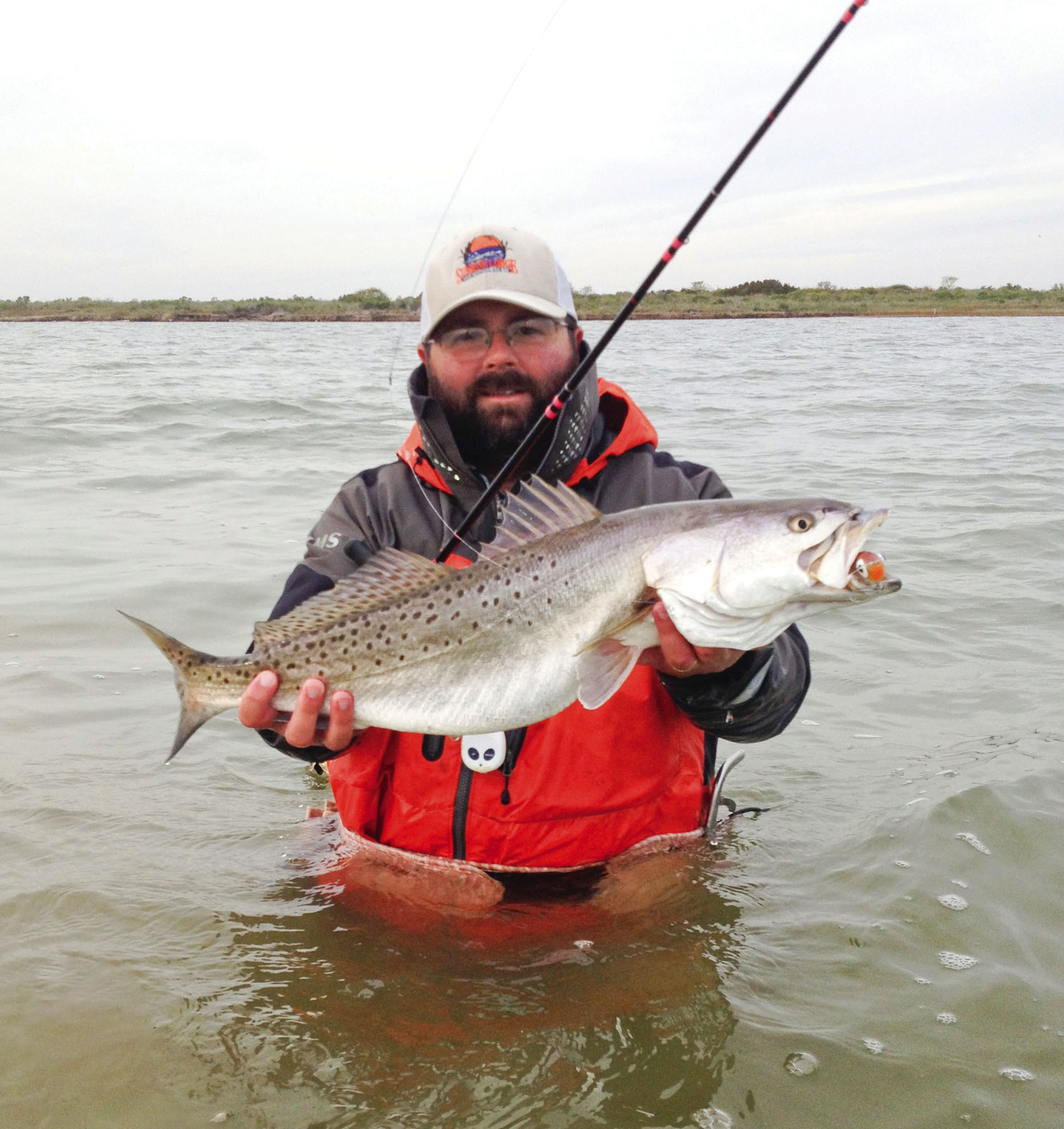 While Jim Leavelle, James Plaag and other Galveston guides were once winter nomads around Matagorda, modern-day pros such as Tommy Alexander are happy to ply the waters of East Matty year ‘round. And for good reason!
According to Webster a nomad is a person or member of a tribe that has no permanent home, wanders about seasonally along traditional routes, usually in search of food or better pasture for herds. Some readers of this magazine seem to fit that descriptionconstantly in search of big trout.

Now there are those who make their living catching fish and those who just live to catch fish, both groups are relentless in their quest and often times end up in the exact same locations. Unlike the majority of the fishing public who find a home bay and rarely stray, these "nomads" are comfortable in virtually any water or situation as long as the fish are there. And while most fishermen spend a lifetime gaining knowledge on a particular body of water, the modern day nomad takes it to a different level, eventually building knowledge and skill on many baysa talent that few possess. I have great respect for these guys.

When I first began guiding, faraway places like the Laguna Madre and Baffin were mythical destinations where giant trout were a way of life. I would buy the Thursday Chronicle, just for the outdoor section, and hang on every word from Doggett, Pike and Tomkins. Stories or reports would surface of a giant trout being caught, and like moths to a flame, dedicated legions of fishing nomads would make their way south to enjoy the run on big fish. Back then news spread at an almost glacial pace compared to today's high speed world of social media. What once took weeks now takes only seconds, and makes the nomad's quest infinitely easier.

The big trout chasers who subscribe to the mantra of "no mud too deep, no water too cold, no bay too far, and no weather too foul" make a habit of being in the right water at the right time no matter where it's located. The thought of driving four hours to fish for four hours and then drive home is a concept that 99% of the fishing world would consider insane. For the dedicated few that are in search of that one giant fish it's just another day at the office. I can remember wading a flat on the west side of Calcasieu when I ran into a couple of guys who had the same idea. On the walk back to my boat I met up with them and struck up a conversation. These guys had been fishing in Galveston Bay just a few hours earlier and decided to go east and catch an afternoon tide change on Calcasieu, and then head back home. It seemed like the potential to catch a big fish outweighed the effort it took for them to do the travel. I happened to run into the same guys a couple of weeks later and they told me the trip was well worth it and they had pictures to back up their claim. All in a day's work for a nomad.

Speaking of working nomads, it's impossible to have a conversation about those who put the miles on their truck in search of big trout without mentioning the guides who take to the road looking for bigger and better fish for their customers. One of the very best guys I have had the good fortune to meet and call my friend was fishing guide nomad, Jim Leavelle. Jim ran Tarpon Adventures of Galveston while some other incredible fishermen like James Plaag, James Trimble and others ran Silver King Adventures. These guys were an amazing group that absolutely had Galveston and Trinity wired like few others. It was not uncommon to see the fleet of twenty-five foot Whalers they made famous in any bay from Matagorda to Calcasieu, or patrolling the beach front for tarpon. Back in February of 1996 when the Texas saltwater fishing world was turned upside down by the 13 pound 11 ounce state record speckled trout caught in Baffin by Jim Wallace, many Galveston guides, including Leavelle, were already routinely venturing away from their home water. In fact many of those guides had become quite happy about their new destination of choice which at the time was East Matagorda Bay. "It didn't matter if it was blowing 30 from the wrong direction, we caught them in East Matty," says Leavelle. Not long after and at the urging of some of his customers Leavelle began to take clients to Baffin where some ridiculous days on the water followed. For the next several years it was a given that during the last half of January through the first part of March if you wanted to find Leavelle or several other high profile guides from the upper coast you need look no further than Baffin Bay. The time and effort to get down there was more than worth it when you saw the quality and quantity of fish that were there to be had. It was a fantastic time for many fishermen.

As each successive year passed Baffin still got the lion's share of attention but other bays began to spit out fish big enough to make Texas anglers take notice. During the late 90s and early 2000s the focus shifted north towards Sabine where newly embraced techniques like wading in winter began to help anglers catch some really incredible fish. In 1997 the lake record was broken twice in less than a month and an 11 pound 8 ounce specimen came out on top. The number of 8-9 pound fish that were taken during that time were phenomenal and that fact was not lost on the folks from Houston. The opportunity to catch a fish in that class without driving forever south was an option many took advantage of. Thanks to the sudden increase in traffic, several anglers decided to leave Sabine and travel another 25 miles to check out Lake Calcasieu. What a surprise that turned out to be for several years, it was absolutely crazy. I can't ever remember going to another bay and being mad if I didn't catch a 7 pound trout that day and that's how it stayed for quite some time. We were spoiled and scared at the same time because we knew it had to end eventually.

Throughout that stretch of years there were some incredible stringers of fish caught that bordered on the unbelievable. Many times those fish were taken by the guys who paid more than their dues and logged more than their share of miles. The willingness to seek out new venues and become proficient at each one is just an unreal accomplishment that very few will ever achieve. For the most part the average angler will spend their career in the same water doing the same things over and over.

It's more widely accepted in the hunting community to actually go to an area to increase your odds of success. If my personal goal was to shoot a Boone and Crockett whitetail I'm not going to sit on some public land in East Texas and expect it to happen; I'm going to South Texas, Kansas, Iowa or someplace like that because that's where deer of that caliber live. Same thing goes for big trout or any other trophy fish, you need to be where they are if you want to succeed.

Now I'm not saying you won't ever catch that trophy in your home water or kill that buck from public land in Podunkville because it does happen from time to time. All I'm saying is that it happens on a more frequent basis in other areas of the world, and if you want it to happen to you then maybe a road trip is in order. You never know what will happen if you decide to check out a new bay but by going to areas that are known to produce upper-end fish you can bet your odds certainly increase. And that's all a fisherman can ever ask for.