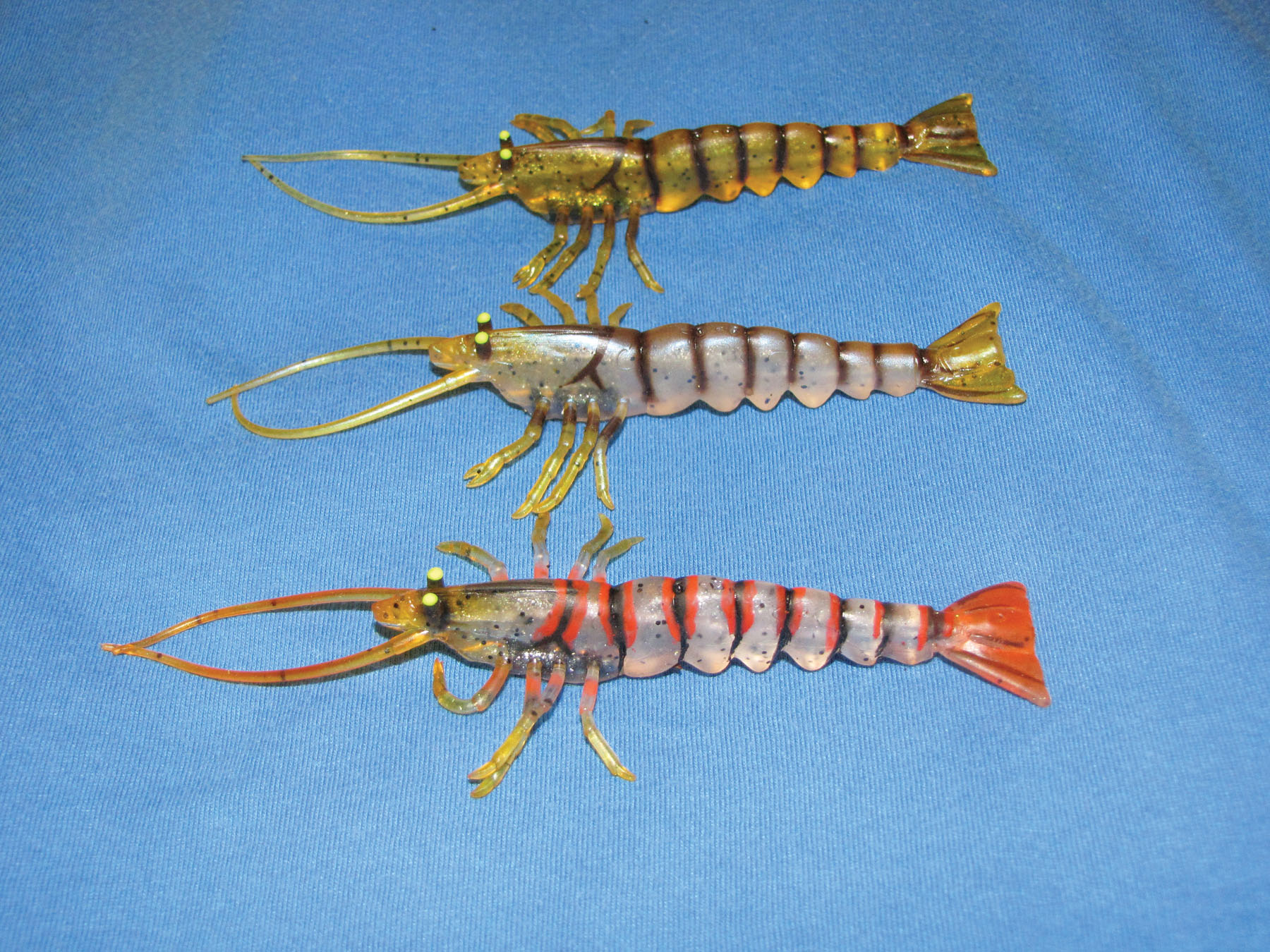 The Savage Gear TPE Panic Shrimp lures are so realistic…no wonder redfish love ‘em.
The familiar sound of the garage door opener breaks the silence of the morning as it rattles along the tracks and comes to an abrupt stop. Before I take my first steps outside I’m already looking at the trees to gauge the wind speed and direction, even after having already checked my favorite weather website. And so it begins—the process of deciphering where to fish and how to attack that particular area based on the conditions of the day.

Every angler is faced with these same decisions to some degree, some more than others. For example, a kayak angler is far more vulnerable to windy conditions than your average boat angler who frequents the bay in a 22-foot center console. Each angler has their own set of parameters in which to work and how they handle it determines success or failure. One cannot just go blindly out on the water and expect to have success on a regular basis; it takes a little more methodical approach.

Having a plan before you leave the dock sounds very simple but in all reality many anglers neglect to do that very thing and waste valuable time using the trial and error method. Now it’s understandable that variables like wind direction, cloud cover, and just weather in general will change during the day and force you to adapt to certain situations. The angler who has a plan for such changes will more often than not be successful while others will struggle.

In the expansive marshes that I fish from Keith Lake to Cameron Prairie, my list of variables to deal with are wide ranging. Just like everyone else the obvious weather concerns are there, especially the wind. Setting up in an area to fish from a poling skiff takes a little more thought or a whole lot more physical effort. Standing on that platform all day bucking a headwind is not the preferred method by any means unless you are one of those workout fanatics who enjoy self-inflicted misery. Last time I checked my waistline I’m certainly not a workout buff so I will continue to play the wind in my favor.

Once I get a good idea on what the wind is going to do I can decide where to start my route. My basic idea is to try and put together a string of ponds or flats that can be fished consecutively, very similar to a golfer walking through a course. If you have access from different directions you can always start upwind and drift your area with minimal effort. There are however some places that are dead ends and can only be fished properly with either the correct wind or no wind at all. Areas like this really require a good feel for wind direction so pay close attention and, if possible, make some mental notes for future reference because that could be the difference between success and failure. A string of productive ponds with the right wind setup is a joy to behold and my goal for each trip.

After deciding what area I’m going to start off in I start looking at water next, specifically clarity. Now clarity is not necessary to catch fish, they’ll eat in muddy water just as well as in clear but it’s much nicer to be able to see those fish if possible. Clear water also usually means there is good bottom grass in the area and that means there should be bait in there as well. I have found a couple of different species of grass that seem to be more productive than others so I constantly search for those when I can. The long and stringy widgeon grass is always good and the shorter, flat-bladed shoal grass is home for many bait species and provides better clarity, on average. The other species that look like cabbage or hyacinth seem to be less productive for me for some reason so I tend to pass them over.

Now that I have found the water I like, it’s time to see what kind of bait is calling this area home. Perhaps the top forage type for redfish would have to be crustaceans, crabs and shrimp. Hands down I find more shrimp and crabs in the stomachs of fish I clean than anything else. Now don’t get me wrong, a redfish will destroy a mullet or mud minnow with the best of them but they really go after the crabs and shrimp. Silver dollar-size crabs are a great sign because the redfish won’t be far behind. The shrimp, both brown and white, make up a huge portion of the redfish diet and the grass in those marsh ponds are full of them. Some folks believe the darker-reddish color of marsh redfish doesn’t happen by accident, it comes from all the iodine in the crustaceans they eat. Whatever—when crabs and shrimp are abundant we usually find lots of redfish.

Speaking of shrimp, over the past few weeks I have been trying out a new shrimp lure from Savage Gear called the TPE Panic Shrimp. So far I have been really pleased with the results as the redfish have just gobbled it up under a cork. The Panic Shrimp separates itself from other lures by being ridiculously durable and flexible all at the same time. In the water it’s about as close to the real thing as I have seen and the colors are top notch. The other nice thing about the Panic Shrimp is that you can rig it to swim forward or backward thanks to a hollow hook channel built into the body. Savage Gear also has some fantastic looking crabs in the same TPE line that I haven’t gotten my hands on yet but I’m looking forward to any day now.

Now once we’ve established some of the key factors like bait, clarity, and vegetation, there’s not much left to do but start fishing. I will usually keep a baitcaster and a spinning rig handy with one of a couple of baits handy. Like I mentioned before a shrimp imitation like the Panic Shrimp under a cork is a “go to” combination that I never leave home without.

Next on my list is some sort of surface plug so I can cover a lot of water if I can’t see the fish. I ran across a new plug from Bagley called the Rattling Finger Mullet that is rapidly climbing up my list of favorites. This is a new plug for 2015 and I have to say it’s been impressive so far. Right out of the package you can tell it’s made really well. The finish is the first thing I noticed, it’s durable and much tougher to scratch than other plugs on the market. The hardware is also equally impressive, heavy duty split rings and top notch hooks that require no extra sharpening. This plug sits a little different in the water compared to many others, it floats with its head out of the water the way we see mullet gulping air and scooping plankton on the surface. The Rattling finger mullet comes in three-and-a-half-inch and four-and-a-quarter-inch models so you can adjust accordingly. This new plug is certainly worthy of a look next time you hit your local tackle shop.

Hopefully now that we’ve outlined a basic plan from weather to bait and a few things in between, you can take this information and put it to work for you. Late May and June mark the beginning of more predictable conditions and that spells good things for anglers. Having a plan and fewer variables is always great recipe for success that will certainly help put odds in your favor and help you get it done.