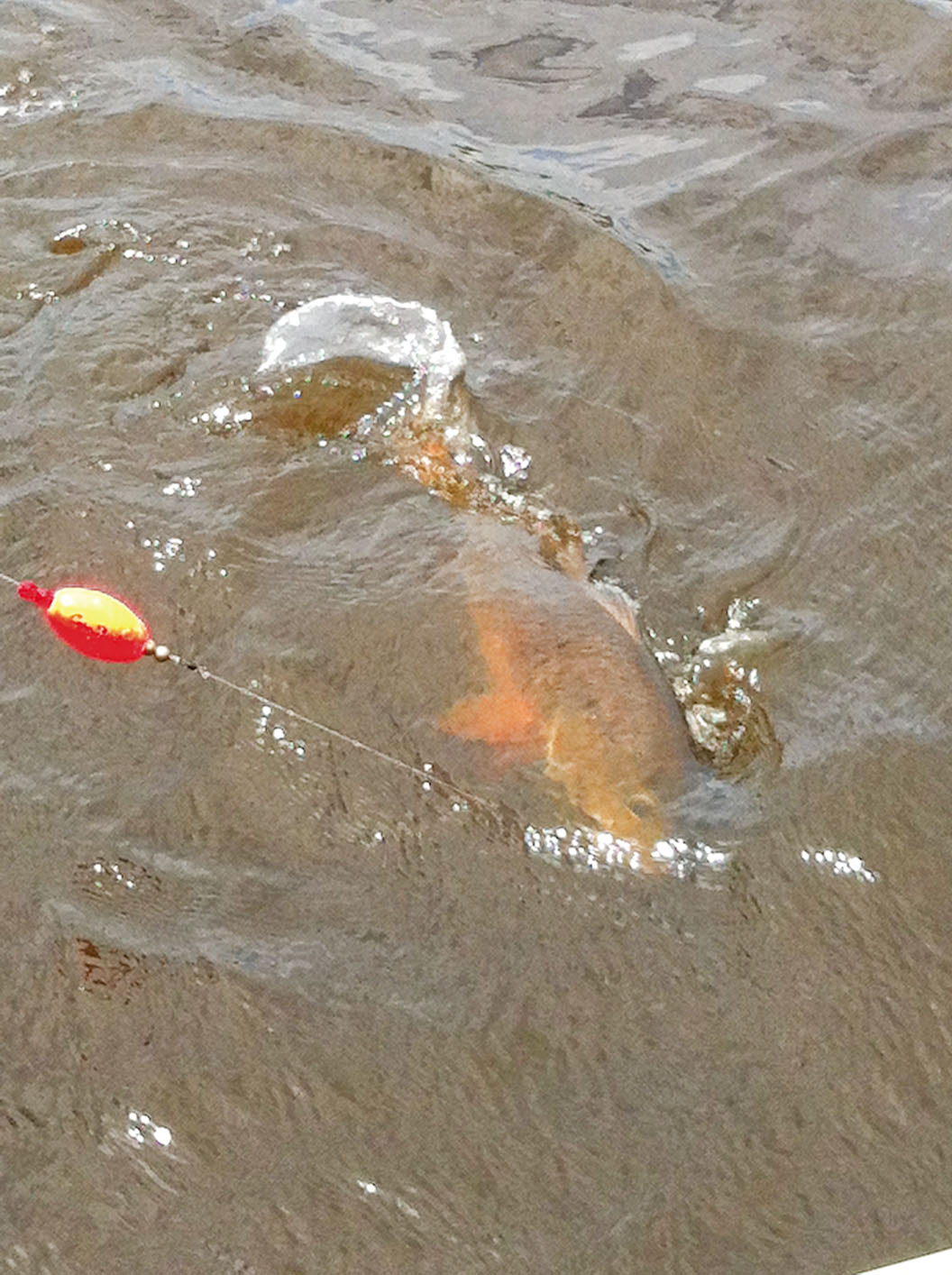 The little skiff came down off plane and glided to a stop as I did my best impression of a fat cat squirrel and climbed onto the poling platform to begin scanning the water for potential targets. My favorite fishing partner, my son Hunter, had already found his spot on the front casting platform and was launching a topwater plug by the time I readied the push pole to propel us along a shoreline. It didn't take long before we started seeing multiple wakes crisscrossing the water in front of the boat. The early morning low sun made it a little difficult to see them but the wakes alone told us there were plenty of fish in the area.

Hunter was doing a good job covering water with a She Pup but was having difficulty finding any willing participants. As we continued down the shoreline it looked like a muddy polka dotted dance floor as redfish after redfish would blow out and leave the telltale mud boil in the water for good measure as we approached. Hunter did what any good angler would do in that situation and that was switch up the offering. Out came the Stanley Ribbit, one of our absolute favorite baits for finicky reds, but it was treated with the same rudeness. It was time to do something different and the answer to our problem was right there in front of us, or should I say beneath us in the grass.

The water we were fishing was full of gorgeous widgeon grass that was holding a healthy population of shrimp. Each time we would stick the push pole in the grass it seemed like we would scare up several and they would skip hurriedly across the surface. The numbers of shrimp had to be a reason there were so many redfish in the area so we decided to make a change in our tactics and offerings.

A quick scan of the side pocket on my tackle bag revealed a handful of Double D rattling corks and that's just what the doctor ordered. I tied the boat off to my Stake-Out Stick and swapped out the lures for rattling corks, 1-foot leaders, and Gulp 3" shrimp on 1/8 ounce jigheads. The initial cast took all of about three pulls on the cork before it got destroyed and took off across the grassy flat in the wake of a broad shouldered redfish. Hunter stood on the casting platform with a huge grin and said, "Well that didn't take long." As his fish was getting its second wind I hooked up with a solid red as well. Our change in tactics had been right on the money and we were certainly enjoying our good fortune as we quit spooking fish and began catching them.

Situations like the one above happen all the time and as fishermen we are faced with a dilemma that could mean the difference between an enjoyable day on the water or an exercise in futility. I'll be the first guy to admit that I have my own personal favorite ways to catch fish, just like everyone else. We all love to see a fish crush a surface pug like there's no tomorrow. The big blowup that is the prelude to a fight with a fish of a lifetime, a fish you will tell stories about for years to come. Other times the subtle strike of a not-so-bold fish taking a bait in winter is enough to get your blood pumping. Still others favor the option of seeing a well-placed fly get gobbled up by a cruising or feeding fish on the flats. All of these scenarios are great in their own way and they all produce fish at the right times.

The problem is they don't produce fish all the time; it's simply a fact of life. Sometimes you just have to change in order to succeed. I know; I know there's that word again. The word change may as well be a four letter expletive the way fishermen shun it. We all hate to change; it's human nature. But in some cases it can be a great thing. Take for example the change Hunter and I made, going to a rattling cork instead of a topwater.

I don't care who you are, every fishermen loves to see a cork go under. That moment of anticipation can take you back to when you were a kid, take you back to remembering how much fun it was to just catch a fish, any fish. Back when it didn't matter what reel you used or clothes you wore, back when it was just fishing and fun. It's amazing how a simple cork can do all those things. I guess it's why I still love throwing it today.

In saltwater environments it's awful hard to go wrong with a lure that looks like a shrimp because everything out there eats shrimp. There are times on Sabine that shad are more prevalent and preferred as bait, but not often. By paying attention to the forage in greatest abundance you can often get a better feel for what the blue plate special might be especially the size of the bait. During the early summer when the clouds of small shad are rafted up it doesn't pay to throw oversized lures when the forage fish are tiny.

Yeah, I know big lures catch big fish, but that's another article for another day. On a regular basis If you want to consistently catch fish, you have to be throwing a lure or bait that most closely resembles the bait that fish are keying onperiod. It's just that simple. The hardheaded and stubborn angler who refuses to follow that ultra-simple rule usually has fast food for dinner instead of fresh filets.

I guess if you had to sum it all up the single greatest key to being a successful fisherman is to be flexible. If you could catch them on the lure you love the most every time out it would eventually get old. It's the times that you can't catch them on your favorite lure that makes the times when you can that much better. Obtaining an appreciation for those special trips on the water when it all goes just right would never happen unless you have some days that are all wrong. It's being able to make those subtle adjustments, regardless of the method, that will make the difference in your success. Keep that in mind next time you hit the water and it just might turn your casting practice into catching.