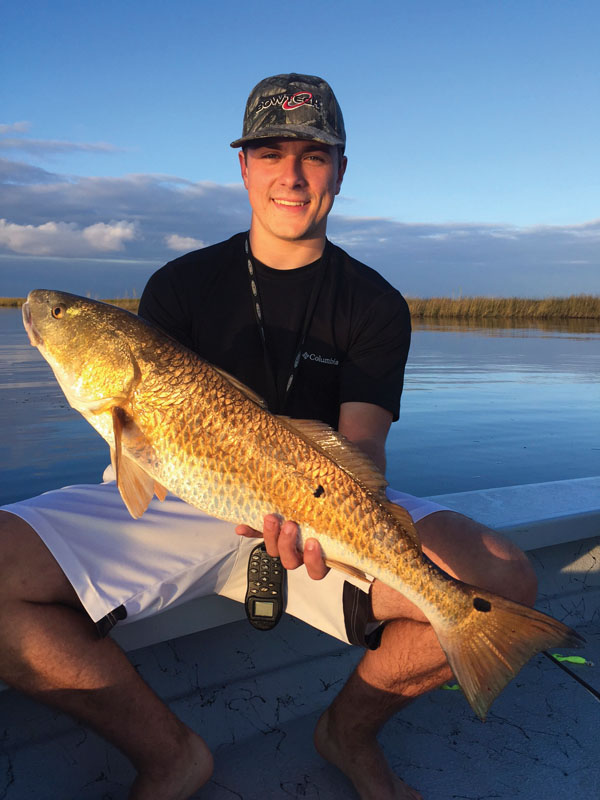 Steady topwater action for bruiser reds was one of our best patterns all year.

For those of you who happen to read this column regularly, you know how much I despise the day-in-day-out predictable and obvious. I've tried for as long as I can remember to come up with a different spin or point of view that will make the average fisherman stop and think. Instead of the same old song and dance it's nice every now and again to look at things from a different perspective. From my own personal experience I have no problem saying, "Not only have I not seen it all; I'm not even close yet." I guess if you really think about it, who would want to have seen it all? The potential to see something new each time you head out is the part of the fishing equation that keeps us coming back for more.

Facing ever-new situations and almost never having a "repeat" season is something anglers on Sabine struggle with on a year-to-year basis. In fact, if you look up "inconsistent" in the Webster's Dictionary, Sabine Lake would likely be mentioned and probably a photo or two just to make it clear.

This past year was certainly one like we have never seen or at least haven't seen in a long long time. The theme for many anglers this year had to be "one step forward and two steps back" as the ever changing conditions just absolutely wreaked havoc on any type of pattern that tried to emerge. Early in the year we had some of the most beautiful water anybody could ask for and the fishing was as good as you would expect until some ridiculous rain and flooding just turned the whole place upside down.

Fast forward a month or two, which coincidentally is when the lake had finally started to resemble normal again, and we repeated the same process only with more rain and flooding than the prior episode. It was all I could do to keep from driving to the boat launch, dumping my entire inventory of fishing gear on the ground, and lighting it on fire while laughing hysterically at my plight. It was ridiculous what happened to Sabine this year and I for one hope it never happens like that again.

We missed out completely on a couple of tried and proven patterns that I personally look forward to every year. Our summer fishing under the birds and the schooling redfish in open water never really happened like one would expect. Also, our late summer and early fall program where we fish the deep water of the Sabine River with both live and artificial baits never materialized either. It was beyond strange to say the least.

There were however some highlights that made up for some of the misery we were dealt by the weatherman. Early in the year we had an absolutely amazing run on some really good trout down near the jetties and that pattern held up for a while regardless of the traffic. Once the word got out it looked like a parking lot in the ship channel but the fish never left so everybody was happy until the rains came and washed that pattern out to the Gulf of Mexico. The next best thing that comes to mind is how incredibly strong the redfish bite was for most of the year, it stayed solid throughout the year and only dwindled a few times when the weather was at its worst.

Probably one of the most enjoyable patterns that emerged was when the water was up so high and the redfish stayed up in the flooded grass along the shorelines while they hustled anything that moved. A variety of methods were employed on these fish and they all worked well but the obvious favorite was throwing topwater plugs at them. We had some crazy trips where we did nothing special, just got on the trolling motor and covered shorelines while watching these redfish annihilate anything that moved. That pattern only improved when the flounder started dumping out of the marsh before the fall run to the passes began. When the flounder showed up we switched over to soft plastics and increased not only our odds for them but continued catching insane numbers of reds as well.

With only a handful of days left in 2015 before we turn the calendar and begin a new year there should still be just enough time to make a little magic happen on the water. Historically some of our best big trout fishing has happened in the month of December and there is no reason why that trend can't continue. The late afternoon bite on those days when the tide stays out all day and warms up the shallow flats is a perfect combination for those anglers willing to brave colder water in search of that one big fish. Several areas on the north end of the lake that are adjacent to deep water are perfect for this pattern and are proven big fish producing areas. There are also some fantastic spots along the east shoreline where the marshes drain onto expansive flats that can cough up their fair share of big fish this month. The water that stays in the protected marshes tends to heat up faster and when it drains into the cooler water of the lake the baitfish activity gets a big boost and the big trout and redfish will certainly be there when it happens.

If you want to finish up your year on a high note you have to be willing to spend some time out on the water in some less than desirable conditions but there are times when it is well worth the effort. Unlike what some may think, late-December (and January) has plenty of promise and offers some great opportunities for anglers. December also means Christmas and every angler has a list of new "toys" that would put a smile on their face. TSFMag has some incredible advertisers and I urge that you to check them out while shopping for the angler in your family.