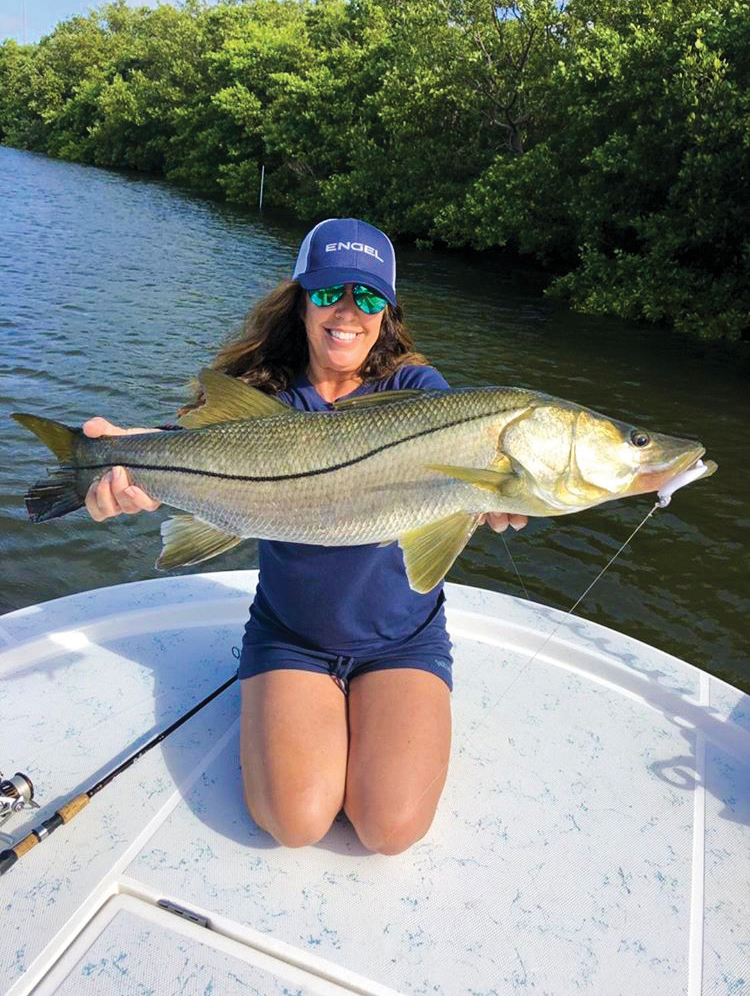 Florida anglers have long known the benefits of light tackle presentations on big fish like this stud snook.

We all have certain people in our lives who are sufficiently influential that their words just naturally carry more weight. Dickie Colburn has always been one of those for me. Dickie has been a great friend and mentor for more years than I care to count and his words have always carried that something extra, regardless of the topic at hand. I can remember well sitting at his kitchen table as a young guide trying to understand how the business worked, soaking up every tidbit of information he shared.

“Son, let me tell you something,” he said. “A man can make a good living with a quality spinning rod. You can make the transition from Toledo Bend to Sabine Lake from one day to the next and catch everything you need to fish for.”

Those words were the product of Colburn’s many years of success on both Toledo Bend and Sabine where he had perfected his craft to the point few will understand. From “whacky worming” largemouth bass to strolling for crappie, all the way to virtually revolutionizing the way we catch flounder on Sabine, Colburn had that whole program wired with a six-and-a-half foot spinning rod in his hand. I took his advice to heart and I think about it every time I flip a lure to a redfish from my perch atop the poling platform or send a popping cork and soft plastic sailing across a flat. There is simply no denying how productive a lighter-weight set up can be.

We all realize fishermen are an ever-evolving breed, much like the fish they pursue fishermen continue to get smarter and better equipped in order to be more successful. A perfect example of this phenomenon is as close as the nearest tackle box and fishing rod. Standard fare among coastal anglers for years was a levelwind reel spooled to the hilt with 17 or 20 pound monofilament. In the hands of the average angler, the reel made one feel as if there were no fish known to man that could not be tamed by this “mini-winch.” Rods resembled pool cues or the handles of garden rakes with their stiffness and diameters. These were the tools of the trade - the benchmarks by which all fishermen were judged. Anything less than a heavy-duty outfit and you were just wasting your time.

In today’s angling world the fisherman has climbed out of the dark ages to embrace the new technology being offered by every major tackle manufacturer. Lighter and more responsive rods coupled with reels that would make jewelers drool are now the common weapon of coastal pluggers. The benefits of this new technology make using lighter lines and smaller tackle a new frontier for Texas anglers. Florida fishermen joke about how easy it is to tell if a fisherman’s from Texas because Texans are always the ones carrying baitcasters. The spinning rig is by far the weapon of choice in Florida’s clear waters where fish can see monofilament coming from a mile away.

The spinning rig is rapidly gaining acceptance among Texas anglers who are now intoxicated with catching big fish on “lighter” tackle. Sure the newer levelwind reels will let you chunk tiny offerings on 8 or 10 pound test, but the spinning rig is much more efficient at this task. Many anglers have been converted to the legion of light-tackle lovers simply by mistake. Flounder fishermen who routinely throw 6 or 8-pound test along the shorelines often do battle with redfish or sheepshead in the same water. Invariably at the end of the day the first fish story told is how the redfish or sheepshead put up such an awesome fight on the small gear. Before too long the light stuff is all these folks want to throw, given that the challenge and excitement is just what they have been looking for to satisfy their sense of adventure.

The natural progression to lighter tackle makes each angler a better and more complete fisherman. By being able to adapt to different conditions, an angler no longer is completely at the mercy of the fish. Trophy trout stalkers all along the coast of Texas routinely down size their line as well as their lure size in clear water. This is a perfect example of how being proficient with lighter gear will help you catch more fish. By adapting to the surrounding conditions an angler will always catch more fish.

Another example is during the winter months when fish may not be quite as aggressive. Light line allows an angler to feel more strikes and in turn catch more fish. This fact is proven routinely on my home waters of Sabine Lake in Texas. In the late winter and early spring it is a common practice to drift soft plastics over a huge reef near the southern end of the lake. Most fishermen use heavy line so they can pull their lures free from the shell they are constantly hanging on. In the past several years many of these anglers have gone to throwing lighter lines because they can feel more strikes and control their baits better. The lighter lines sink quicker because they are less buoyant, which means the fishermen can now get their offerings closer to the shell where most of the speckled trout tend to position themselves. Heavier lines tend to float higher in the water and will often times not get down deep enough to reach the fish. It is funny to watch as other anglers try to figure out what is going on, how one guy is steadily catching and the rest of them are drawing blanks. Chalk up another one for the light-tackle angler.

For those who just can’t dream of using lighter line, you may want to check out one of the super lines, also referred to as braid. These lines are incredibly tough and sensitive while maintaining ultra-thin diameters, much akin to smaller mono. I switched to Suffix several years ago and I have been very pleased with the results, my favorite size is the 30-pound test in 6-pound mono equivalent diameter. The small diameter line allows me to use a smaller series spinning rod and reel and that translates into less weight and fatigue at the end of the day. The sensitivity and strength of this line and others like it will completely blow you away if you have not tried it yet. For folks who just don’t feel comfortable with using light line, you can think of braid as “training wheels.” A nice compromise without sacrificing confidence.

Going to lighter offerings in certain conditions will undoubtedly result in catching more fish and we all agree that’s the goal. Most folks will never completely relinquish their trusty baitcaster and there really is no need to do so. It’s those folks who are willing to try a lighter approach that will appreciate all the newfound flexibility they will gain by being open to the new gear. I promise it won’t take catching many fish on the lighter gear to put a smile on your face; it’s truly addicting.

Do yourself a favor. If you do not already own a quality, lightweight spinning rig, get one. You won’t be sorry.