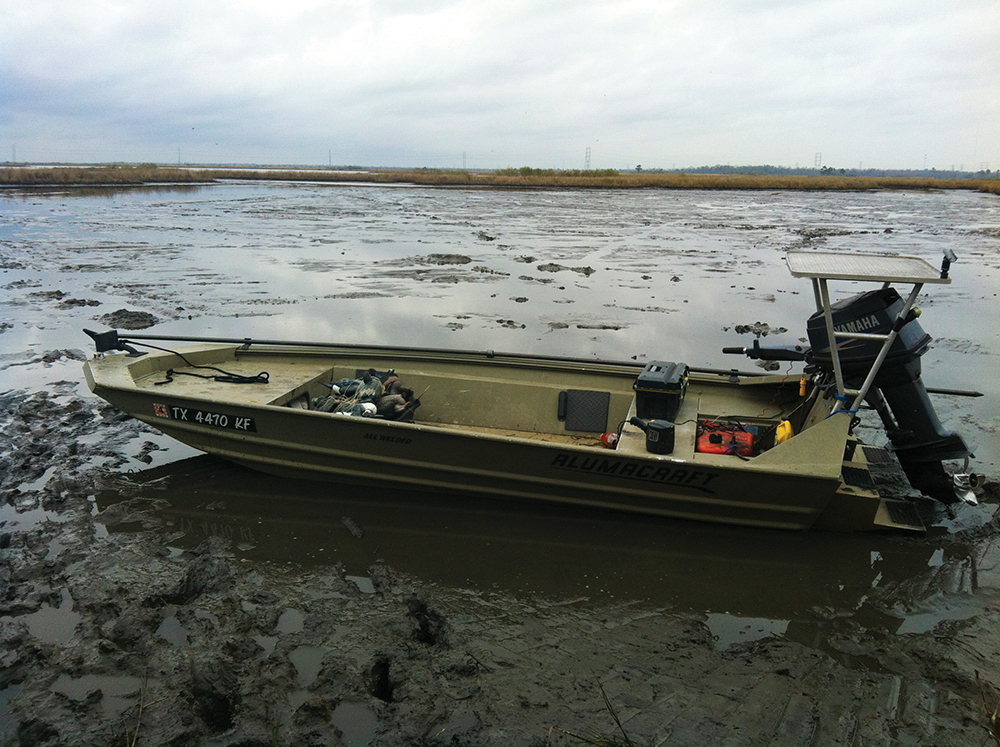 Endless expanses of shin-deep water conjure up images of wide-backed redfish and trout as long as your leg. But the shallow water that is just a cast or two away may as well be on the other side of the world if you are in the wrong boat. Modern day fiberglass rockets that will take you from 0 to 60 in seconds are useless in a situation like this and wading some of these areas just isn’t the ticket either. What you need is a skiff, a bona fide shallow-water stalker that will take you where few others go and even fewer fish. I have had the good fortune to run some of these high tech skiffs like the Maverick HPX and Hells Bay, they are incredible machines to say the least and they don’t come cheap, either. Now not everyone wants to shell out a king’s ransom for the high-end skiff but that’s not the end of the road, you have other options and they are quite practical.

One of the drawbacks to a top-of-the-line skiff, besides the price tag, is the fact that they are so nice and pretty that you almost feel afraid to use it for the reason you bought it. Not many people are going to put a duck dog and several dozen decoys in a poling skiff with a $40K price tag and take off to the marsh. Many coastal anglers not only fish but they also hunt, so a small boat that doubles as a way to get into backwater for fishing and hunting serves many purposes. The more ways you can use the smaller boat the easier it is to justify having one; this comes in handy when you are negotiating with your spouse. My lovely bride once told me, “You need two boats, you can’t run your business without them.” Did I mention how much I love my wife?

Now that we have made convincing arguments for the small boat, which way do we turn? In my part of the world up here on Sabine and Calcasieu lakes, I have seen two styles become really popular. One is a flat bottom fiberglass such as the Carolina Skiff, and the other is any number of aluminum tunnel hulls. My good friend, Capt. Ron Begnaud, of Lake Charles has tricked-out a small Carolina Skiff and it works great. The best part of the whole process is customizing the boat just like you want it and not spending a fortune in the process. Ron had a poling platform welded up, added a jack plate to his 25-horse Yamaha, installed rod holders, pop-up cleats, push pole holders, and low profile lights for a fraction of what they might cost on a high-end craft. All in all, Ron has less than $9K invested in the whole rig and believe me it floats super skinny and many redfish have made the trip over the gunnels.

Now the other option is an aluminum boat, preferably a tunnel hull, if possible. I have been running an Alumacraft 1650 tunnel hull with a 40 horse Yamaha for several years and I love it. The little boat has tiller steering so I have a ton of room for gear and less stuff to get in the way for my fly fishing clients. The floor and sides have all been covered in a thin sheet of aluminum so no ribs are exposed; it gives the boat a clean finished look. Under the floor there is extra floatation so the noise is reduced considerably.

I had a custom poling platform fabricated and also had sponsons welded on the transom for even better shallow water performance. I added holders from Pole Cat Push poles to cradle the 21 foot Stiffy Carbon push pole. A set of $20 rod holders, four industrial mats from Home Depot cut to fit the floor and decks, along with a rod holder for the platform round out the modifications. The rubber mats in the floor and on the deck make clean up easy after a hunting trip, add to the noise reduction capability, and make walking on the aluminum floor with bare feet in the summer much more bearable.

As far as fishing goes, right now several of my last trips on the water have been solo adventures without a fishing rod and accompanied only by my black lab, Joli, and my binoculars. I truly love these days because it helps me switch gears from ducks to fish without missing either one. March and April offer some of the best opportunities to see ducks in their full plumage before they make their way back north. The blue-winged teal migrating back up from Mexico are usually the stars of the show, especially when I’m scouting the marshes of Sabine and Calcasieu for redfish.

The small groups of birds work low and fly thru the maze of islands like little jet fighters making just as much noise with their wings as they do with their calling. The drakes are painted up like a brand new decoy and easily identifiable; they drive my dog nuts because she keeps waiting for a shotgun to go off and the opportunity to go fetch one. To see birds in the air and fish in the water at the same time is what really gets me going, the best of both worlds right there in front of you.

On one such recent outing I made a loop through some of the marsh ponds that I hunted this past season. On my way in I passed a line of waders standing like solitary figures on an expansive flat, I’m sure we both were thinking “What’s that idiot doing out here,” as the weather was a good bit less than chamber of commerce. I swung my skiff wide of their position and made my way into the marsh and some much more comfortable surroundings. The lake that was churned up from wind and runoff gave way to beautiful clear water and a slight ripple.

I pulled the skiff down off plane and gave the pond a chance to settle as I climbed up on the platform. Much to my surprise a defined group of redfish were milling about as if they had no idea a visitor had made his way into their pond. I pushed up on the pod of fish and just watched for a few moments until they made their way down the pond and eventually swam away from where I was. The rest of the afternoon was more of the same, small groups of fish just relaxed and enjoying small crabs and a few finger mullet.

For an early-spring day it was an eye opener; we normally don’t see fish like that until later when water clarity improves. The above average rainfall we experienced during the first months of the year has kept Sabine off-color for extended periods and that murky water has found its way into the marshes as well. The amount of vegetation that normally begins to sprout up is a just a little bit behind schedule but that is subject to change overnight with both air and water temperatures climbing. I think we are right on the verge of finally shaking off the effects of the wet early-spring and getting to a much better place as far as overall fishing conditions go. Hopefully we will begin to see things get back to a much more normal state sooner rather than later so we can put a dismal 2018 in our rearview mirror.