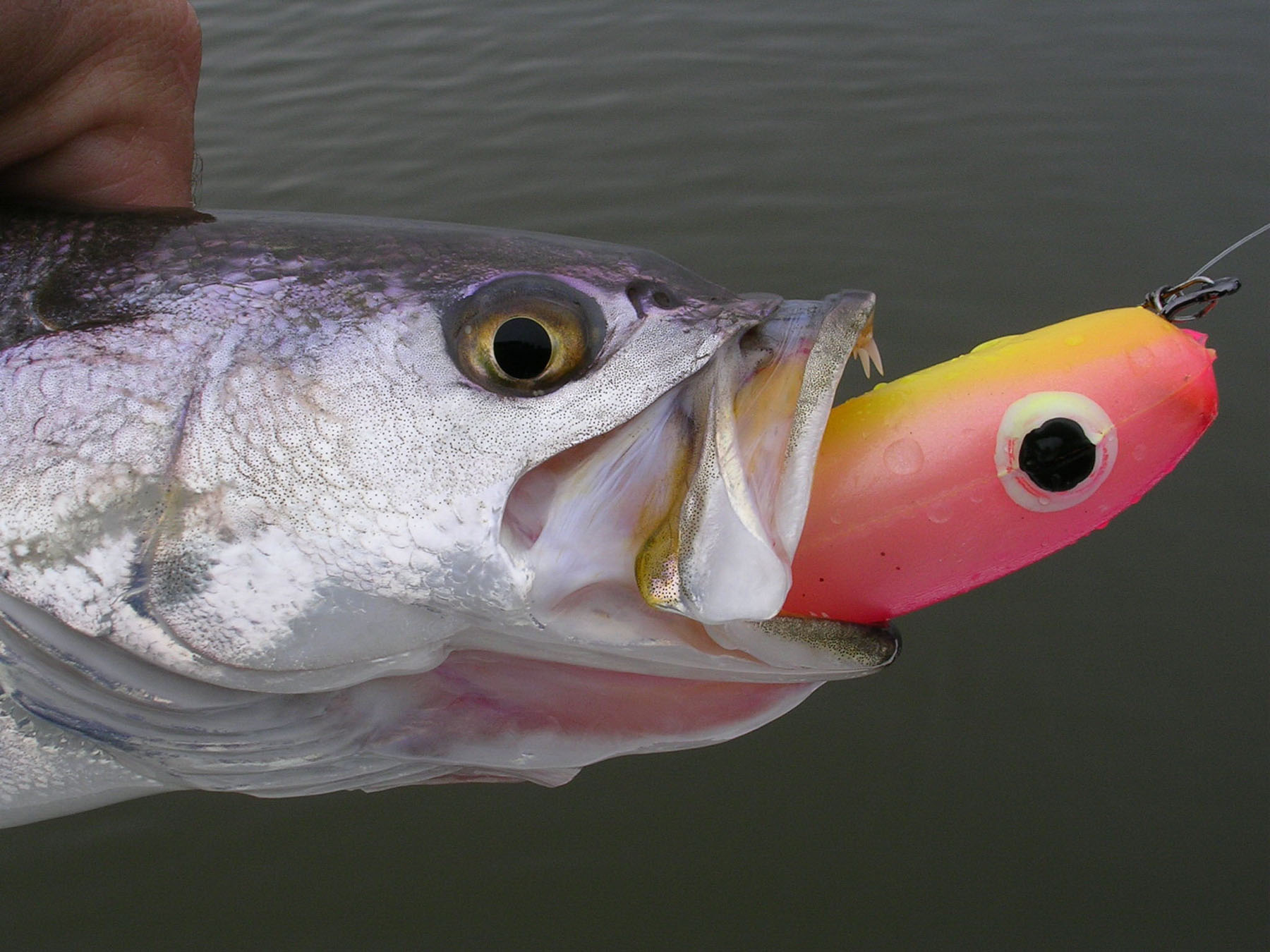 The new Brown Solo was more than this trout could stand.
People often say that the first step to curing a problem or addiction is to admit that you have one. "Hi my name is Chuck Uzzle and I am a lure junkie."

You'd think that with getting that off my chest I could embark upon a path to recovery, right? Not a chance! If there is one thing I am certain of, it's that I am not alone in suffering this tackle affliction, it seems almost all anglers suffer from this expensive habit and you just don't shake it overnight. Ask any guide how much tackle they carry on their boat on any given trip and most will say, "too much."

Guides aren't the only ones who carry way too much tackle, the regular weekend fisherman totes way more than their share as well. I know I've had some fun trying to fit all the tackle clients carry into my boat, sometimes it's down right comical and all you can do is laugh. "We got enough tackle to make Fishing Tackle Unlimited blush" is a common sentiment and it's usually true.

The old saying, "lures catch more fishermen than fish," is the creed of the lure junkie and I can recite it as well as anyone. I can also attest that the real lure junkie can find a new "gotta have" bait almost anywhere, and is never prouder than when he can show off a bait nobody has ever heard of or much less has in their box.

One day not long ago while drifting the reef with a group of clients, I made note of the lure colors they used as we enjoyed steady catching throughout the day. Mind you, the color changing continued even after the pattern for the day was well understood. Then one of the guys decided to experiment with one of his favorite baits. As the hideous offering was lowered into the water it took no time at all before he began to heft one good trout after another into the boat! I could not believe my eyes. Needless to say my own lure junkie status kicked up a notch and I have now become somewhat of a "hidden bait" fanatic. I enjoy finding out what particular baits are used in different places as well as finding out if they will work as well here on Sabine Lake or other local waters.

A perfect example of how different the color choice can be between lakes is found when you compare Sabine and Calcasieu. These two lakes are only separated by 30 miles and are very similar in many aspects yet the choices of colors could not be farther apart. On Sabine Lake we throw very bright colors like chartreuse and glo while on Calcasieu they throw plenty of black/gold or dark purple with a chartreuse tail known locally as "LSU". Two very similar lakes with two totally different colors of choice both catch fish and each one is considered a mainstay by local fishermen.

In the past decade I have had a couple of memorable fishing trips when my eyes were introduced to a new bait that made a lasting impression on me. I found some tiny plastic worms while fishing in Colorado that I rigged wacky style and caught lots of brown trout in a backwater stream near Royal Gorge. The local fishermen had no idea what I was doing, but they knew I was catching fish. The first time I threw a Corky and caught speckled trout in Sabine Lake would rank right up there in the eye opener category.

Without a doubt the number one memorable trip that changed how I fish came at the hands of an outstanding angler from Louisiana's Cocodrie marsh area, his name was Bo Watson. Bo came and fished Sabine Lake several times with his brother Howard; both of these gentlemen were excellent anglers and fun to be around. On one particular trip the three of us were chasing the birds in the late summer and early fall, we were catching plenty of fish but the size of the trout was on the small side and we had not seen any redfish. While Howard and I fished from the front of the boat we heard Bo say that it was time to start catching some real fish and he was going to switch to what he called the magic bait.

I paid little attention to the announcement until Bo began to reel in some beautiful redfish and several hefty trout. Now I am not one of those hardheaded fishermen who refuse to ask, "what bait are you throwing and do you have another?" Bo obliged and I haven't been the same since. After that trip I spoke to Howard and he told me that Bo goes on these trips just to see if can he convert the guide to his favorite bait, I told him I had no problem saying I was converted as long as the fish kept biting.

Bo's "magic bait" was a Bass Assassin Sea Shad in salt and pepper with a chartreuse tail. This bait and/or color combination has since become known to my friends a as the Watson Special or Bo's Bait. Countless trout and redfish as well as flounder have fallen to this super little bait, and there have even been some really big fish caught on it as well. Each time I pick up this little piece of plastic I am reminded of how I was introduced to its fish catching capabilities. This little "out of town lure" will continue to be one of my favorites for years to come as it continually produces fish as well as reminds me of a good fisherman.

Every bait has a story associated with it and perhaps that's what keeps us searching for more new lures. My grandfather passed away in December and I've found myself going through his old tackle box and remembering each story that went along with the old antique baits. Reminiscing over big fish that grow even larger every time a story is told, holding the lure and imagining all the fish that fell for the offering. Memories like those are worth more than anything and are also the reason I keep chasing new lures. I may not catch any more fish with all the new tackle but any good memory they provide will be worth more than all the baits combined.