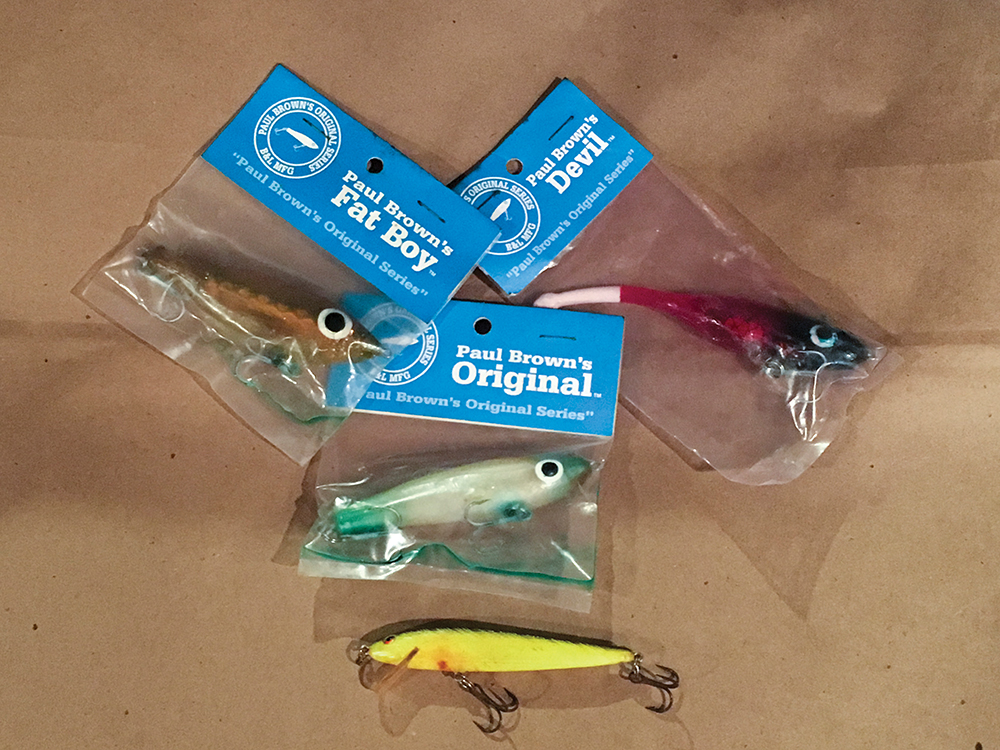 Vintage Corkys from when Paul Brown made them in his garage - tough to beat the slow sink rate and suspending qualities of these baits when wintertime fish feed slower.

For as long as I can remember the first few weeks of every new year have been an exciting period, and for many reasons. The most obvious is the hope and high expectation that arises from cracking open a new calendar and staring a brand new season in the face. For those of us fully enamored of the outdoor life, January and February are a fantastic buffet with endless options from one end of the spectrum to the other. Unless you are a diehard waterfowl hunter, you will have likely have just put away your hunting gear and begun to yearn for days on the water, staring out the window at the most unpredictable weather of the year. February, for me, always meant trips to Toledo Bend, searching for big bass or crappie until I was shown what I had been missing right here on my home waters of Sabine Lake.

Chasing fish in the winter and early spring on Sabine usually meant probing shorelines along the river with a trusty Rat-L-Trap and catching my fair share of redfish. That crankbait pattern that worked so well on redfish was actually perfected by bass fishermen who made a living farming the grass flats and points of the freshwater lakes to our north. Although this pattern was very successful it was only part of the overall puzzle and I had yet to find the other missing pieces that would introduce me to big winter speckled trout.

After many fruitless trips and empty casts, I was finally rewarded with one of those unforgettable days on the water we all dream about, big hungry trout stacked up across a flat…and no other boats in sight all day.

The trip was epic in regard to the fish we caught but that paled in comparison to the other things I learned that day. Previously, I’d had multiple conversations with some of the best big trout anglers I knew at several of the boat shows and, if they would let me I would pick their brains about all things associated with big trout in the winter, or big trout in general.

Each angler I spoke with was more than happy to share a few tips and I cherished all of them. The common denominator in virtually all these conversations was using a somewhat bigger bait that mimicked a mullet. The overwhelming choice of lures for nearly all the anglers I talked with was one of Paul Brown’s Corkys, the mysterious “super baits” that had produced scores of double-digit trout and a state record.

In the right hands, a Corky is about as good as it gets when it comes to catching these big fish in the winter months, but it requires presentation techniques that many have difficulty mastering. The Corky really shines when big trout suspend or become sluggish in their feeding habits due to cool water temperatures and that’s usually what anglers are faced with in the winter and early spring.

I have seen my clients on more than one occasion just absolutely give up on the Corky family of baits because they simply couldn’t develop a feel for the bait while others took to it like a duck to water. It was at that moment that I decided I had to come up with a more user-friendly option and I reverted to my freshwater upbringing for a solution.

A freshwater alternative to the Corky family that is quite a bit easier to master is what’s sometimes called a suspending jerkbait – the Smithwick Rogue and Rapala X-Rap being great examples. These plugs are designed to be retrieved slowly down to a certain depth, (where fish are suspended in the water column), a technique that removes much of the guesswork for the angler. I have had great success using these plugs over the years and I still go to them on many occasions. It’s just awesome to see folks who were frustrated with not catching on the Corky get fired up once they get that first bite and figure out the technique. As a guide you can do no better than teaching your client a technique or method they can use later on down the road; for the guide it’s the greatest reward they can experience.

After seeing how well some of the freshwater plugs crossed over into saltwater, I started trying other lures and found similar success. I’ve seen deep-diving crankbaits absolutely wreck trout and redfish along the jetties as they bounce down those submerged rock walls.

The spinnerbait is another saltwater convert and perhaps the most widely used of the “fresh to salt” crossover lures. Big single Colorado blade spinnerbaits dressed with your favorite paddletail soft plastics are a dynamite option for catching redfish, especially in dirty water. The vibration given off by those big blades is often more than a hungry redfish can resist and the strikes are usually bone-jarring to say the least. That many professional redfish anglers rely on spinnerbaits to produce winning sacks of husky brackish water brutes speaks volumes.

I have always been a firm believer in the notion that a well-rounded angler is potentially more productive and has a better time on the water. By being open to new techniques and different approaches you can easily increase your odds, efficiency, and productivity each time you go out on the water. Also, don’t be afraid to try something new if you think it makes sense. You may surprise yourself how well crossover baits and presentations can get the job done.