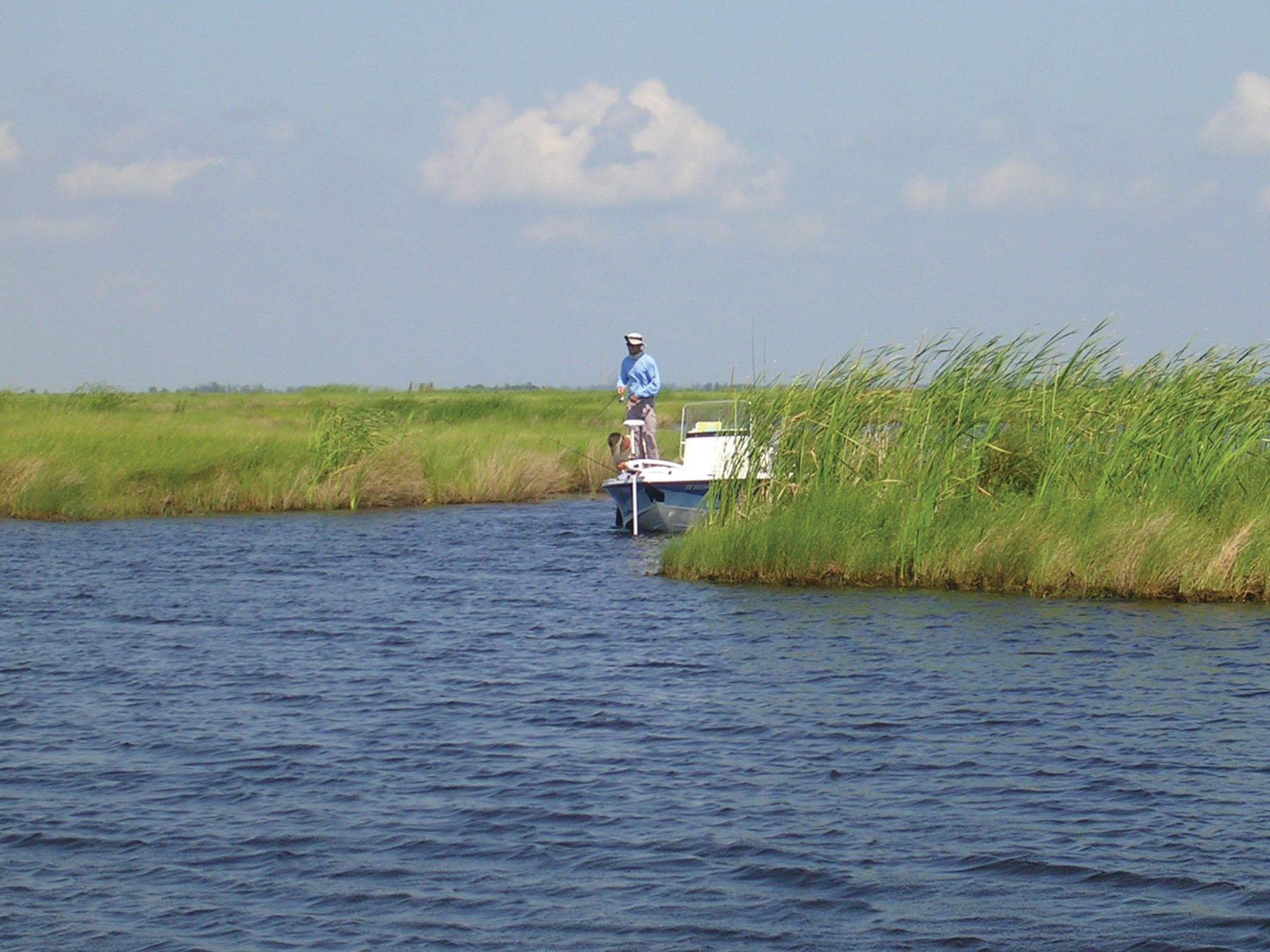 Flounder fishermen will shy away from the crowds and take advantage of the many marsh drains on Sabine.

In the business world, travel is a necessity that comes with the territory and can be both a blessing and a curse. Most of us are familiar with the term "frequent flyer miles" - a program that tracks miles flown by an individual that usually includes a rewards system. During the spring months most saltwater fishermen would dearly love to be able to participate in such a program because travel will be a major part of most any pattern, especially here on Sabine.

Now anyone who has spent some time on this end of the coast knows how fickle and changeable the weather and fishing conditions can get from one day to another. The spring months are notorious for throwing curves and wrecking the best patterns overnight with a variety of problems. Unlike our fishing brothers to the south, the biggest obstacle Sabine anglers have to overcome is freshwater runoff. The watershed from both the Sabine and Neches rivers can be enormous at times and virtually render the entire northern half of the lake un-fishable for days at a time. So far it appears this spring will be much more "normal" than the previous years due to our part of the state finally getting some much needed rain. The months of January and February saw some big rains fall over the state with some of the biggest falling in northeast Texas. Seemingly overnight both Toledo Bend and Sam Rayburn went from record lows to within a few feet of normal pool, that's a ton of water by any stretch of them imagination. Fortunately for Sabine anglers both lakes were low enough they absorbed the brunt of the runoff. Had both lakes been near pool level we probably would have been jigging minnows at the Sabine jetties for crappie instead of chasing trout and redfish.

Even with the big lakes to the north offering some help from the runoff, Sabine has still been much different than it was all winter and that means anglers are now going to have to hunt much harder for their fish. During periods like this it's not uncommon to find fish heavily concentrated in one small area, it's finding that one small area that's tough. Factors such as structure, bait, water temperatures, and tide are always high on the list of variables and will definitely help you locate fish but they aren't the only way to find fish. Another excellent method to help you find fish is to watch the crabbers and where they place their crab traps. These guys are a great barometer for salinity in deeper water since they have to adjust where they fish on a daily basis. In deeper areas like the rivers and ship channels you can rule out plenty of water by just finding the crab traps before you start fishing. As simple as this sounds you would be surprised at how many anglers never tried this method.

Okay, now we have established the fact that we are covering some water and looking for some signs to put us in areas that are holding fishable water. Without a doubt the center of the fishing world on Sabine when conditions get like this is the Causeway Reef. The Causeway Reef offers up another great barometer for water conditions due to its proximity to the gulf and the depth of the water. The deepest water in the entire lake is at the Causeway Reef and that makes it a main staging area for fish. Many anglers will begin their day at the reef and branch out from there depending on conditions. Early birds will make the seven mile trip south to the Sabine jetties when the wind is calm in order to take advantage of a big fish bite that usually happens from about an hour or so before sunrise to just after sunrise. If this bite doesn't materialize it's often back to the reef to start probing the oyster shell and figure out the pattern for the day.

The Causeway Reef isn't the only game in town but it's often the most consistent and that will be sure to draw a crowd. Anglers who are less than enthusiastic about sharing the shell with a crowd will often head for the Louisiana shoreline and protected water where they will either jump out and wade or start covering shorelines on a trolling motor. The shallow bite along the shorelines is a staple for Sabine fishermen since the population of flounder here is what made Sabine famous. Probing shoreline cover and breaks with small jigs or grubs is a great way to catch flounder and also find the occasional redfish or big trout. More than once I can remember being pinned down to a small stretch of water that was either protected or showed signs of life while flounder fishing only to have a school of really good trout or redfish show up and start eating every shad or mullet they could find. The spring is unpredictable and it can leave you scratching your head one day or begging for more the next.

As the weather and fish struggle to get on a consistent a pattern a new factor appears to be coming more and more into play and that's the rising cost of fuel. Estimates of $4.00 a gallon and beyond will certainly begin to limit many fishermen, especially the offshore crowd. The inshore bay boat folks will also be less apt to just take off and go scout or make a pass just to "go see." Smaller boats and kayaks will become more and more prevalent in the meantime as will trailering to a launch closer to your fishing area. There will always be a few who are going to run all over the world even if gas is $10.00 a gallon but they will certainly be in the minority. The traffic closer to launch areas will increase and those who decide to make the big runs will be rewarded with less competition for prime fishing areas. There is no doubt that the cost of fuel will be a major factor in the upcoming weeks and months.

With all the uncertainty the spring presents to anglers it's one of the most anticipated times of the year because some of the best fish of the year are taken during this period. Despite all the factors that seem to stacked against the fishermen, most of us wouldn't have it any other way because that next bite may be the one you have been waiting for all your life.