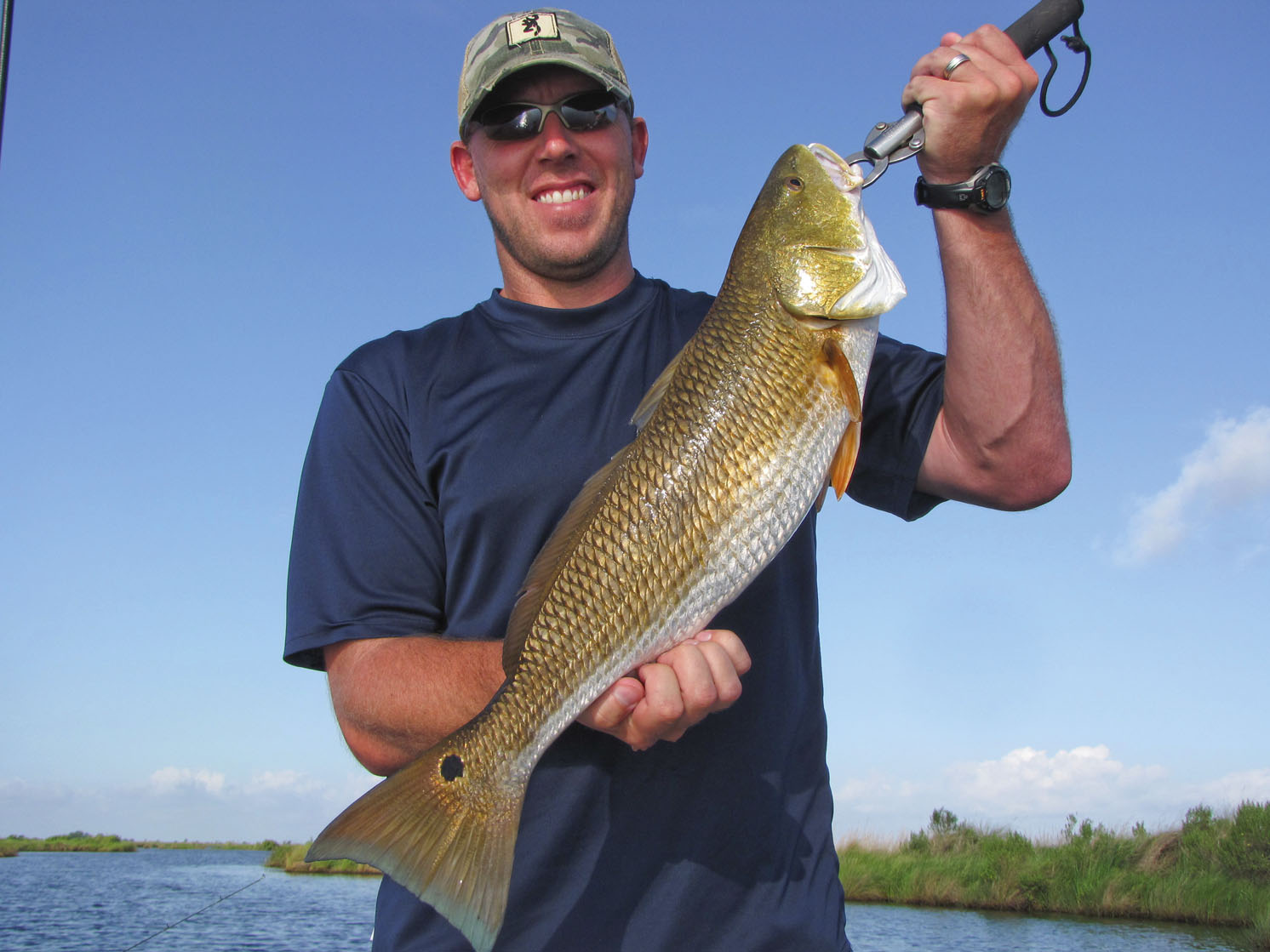 Waco Robinson head baseball coach Bryan Kent with his first-ever topwater redfish.
For the majority of upper coast anglers the concept of actually seeing a fish before you cast to it is probably about as foreign as going to a restaurant that doesn't serve sweet teait's just not natural.

Most anglers on their first trip with me are very surprised to find that we have water clarity good enough to actually see fish. This, they think, is found only in venues farther down the coast or some Caribbean island where the white sand is nearly blinding, not the upper coast of Texas or Louisiana. Now don't get me wrong, the water I frequent will never be mistaken for Belize, the Keys, or even South Padre but it certainly might surprise you. The water itself is just as clear but the lack of contrast from the darker muddy bottoms makes it appear otherwise. Once you actually see some shell or drop a bait to the bottom and realize just exactly how clear the water really is, all that most folks can do is shake their head. It is places like this where I choose to spend the majority of my time guiding and I wouldn't have it any other way.

Sight-fishing is obviously an acquired taste and skill but once properly introduced many find that they simply cannot get enough of it. Over the past decade or so I have basically gone to sight-fishing exclusively whenever the weather and water conditions will allow. I still enjoy getting out in the open bay and chasing fish out there but the thrill I get from actually seeing fish and coaching clients to catch them is about as good as it gets for me. To stand on a poling platform and tell a fisherman on the front deck exactly where to throw and then watch it all unfold as a fish comes crashing down on the lure or fly is what gets me out of bed each morning. I can't get enough and it never gets old.

I remember years ago when Mark Castlow would bring his famous Shallow Water Fishing Expo to Houston and some of the best guides in the world of light-tackle fishing would be in attendance. It was a free-for-all of knowledge as they generously shared techniques and stories of success and also hard knocks. I was relatively new to the sight-fishing game at the time so anything I could pick up to improve my own game and the trips for my clients was like finding gold.

Easily the most important piece of information that all those great guides stressed was to have the ability to coach your clients and communicate to them in a way that was easy to understand. In order to practice that I enlisted the help of my son Hunter, who was seven at the time. I figured if I could teach him how to chase these fish then it would be a snap to do it with adults. It would also make our days on the water even more enjoyable as we spent more time in the boat together. Some of our earliest lessons were comical, especially to the neighbors who happened to be watching. In order to teach Hunter how this style of fishing worked I parked my trailered skiff in our vacant lot next to our house. Next I went out and placed 2-liter bottles at different positions on the lawn to simulate fish, the neck of the bottle was the face of the fish so Hunter knew which way it was facing. Once our "target practice" was set up I grabbed a piece of chalk and drew a clock's face on the deck so Hunter would know which way to line up when I called out the targets.

This game was an instant hit; Hunter enjoyed the competition and I loved watching him. Once we got the hang of how to cast ahead of the fish and to bring the bait into the strike zone we upped the difficulty a little bit. Instead of throwing at a motionless bottle, I would walk around the yard as if I were a fish swimming by and Hunter had to work with a moving target. Occasionally I'd stop, stand on one foot, and bend over, which meant I was "tailing". If Hunter's lure fell directly into the sweet spot in front of me I would grab it, just like a big red. If he threw too close to the side or behind I'd run off and tell him he had blown it and spooked the fish. It was hilarious, something I will always cherish.

When we finally took our game to the water Hunter was a machine. He followed every instruction to the proverbial T and became a really good sight-fisherman. I'd say, "Redfish at 2 o'clock going right to left at 40 feet" and he'd look down at the numbers in the boat, align himself, make a long cast, and ask me when to start expecting the fish. It worked like a charm and enabled us to have some absolutely epic days on the water. I now had my game plan and was ready to implement it on all my new clients.

As the list of fishermen I guided began to grow, I continued to learn and develop my teaching techniques. For instance, I now ask my clients whether they would prefer target distances in feet or yards. Most fly fishermen like their distances in feet while light-tackle anglers seem to prefer yards. I also like to get a feel for how accurately they can judge distance. I routinely ask them to estimate the distance to certain features or objects in the water and I can readily spot the ones who are serious bow hunters or play golf as they tend to be surprisingly accurate.

Being able to follow a guide's instruction is crucial to success when chasing fish in skinny water. Nobody is perfect and bad casts and other problems will always be a part of the equation. But for the most part, when a client is willing and able to follow instructions it makes for a much better day.

There is always a measure of good-natured banter and occasionally I can heckle a bit. Like the guy who continuously missed his marks to the left "Hey, are you on Pacific time?" Somehow his attempts to lay a cast at 1 o'clock always seemed to fall somewhere closer to 11. Or when a client casts to the tail of the fish instead of the head, I may give them the old "your other left" to get my point across. Most of these comments are met with a laugh and usually get the point across without hard feelings.

I really enjoy watching folks as they develop a feel for this style of fishing, they begin to really pay attention to any type of movement in the water and get genuinely excited each time a redfish presents itself. Some get a little over zealous, declaring every mullet swirl or sheepshead's mud-boil is their next red as they cast with high hopes. That's where the next lesson comes in, reading the fish and the subtle signs that point to success. When anglers begin to get the hang of that I feel like I have done my job. These days I seldom bring a fishing rod on my trips as I spend all day on the platform scanning the water for the next fish and doing my best to give my clients an opportunity to catch it.

Just recently I had the great privilege of taking Chad Landry and Bryan Kent. Chad was my son's baseball coach at Bridge City High and Bryan is the head baseball coach at Waco Robinson. For two years it seemed inevitable that we would face Waco Robinson deep in the playoffs and those were some great games. Coaches tend to be quite athletic with exceptional eye-hand coordination and this makes for quick lessons. Bryan is an avid freshwater fishermen and jumped at the chance to come down and chase redfish. For two days I stood on the platform and "coached the coaches" as they picked off some great fish in the marsh. The first fish for both Chad and Bryan came on topwater plugs and really opened their eyes with spectacular blowups and peeling line the way big reds do. The big smiles and good-natured competitive trash-talk was good as well. It didn't take either one of them long to figure out the program and progressively get better by the hour. We had a great two days together and I look forward to doing it again very soon.

I can say with all honesty, that while I love to catch fish, my greatest joy is teaching and coaching from the poling platform, helping others do it. Sight-fishing may not be for everyone but I have not met many who will turn it down.