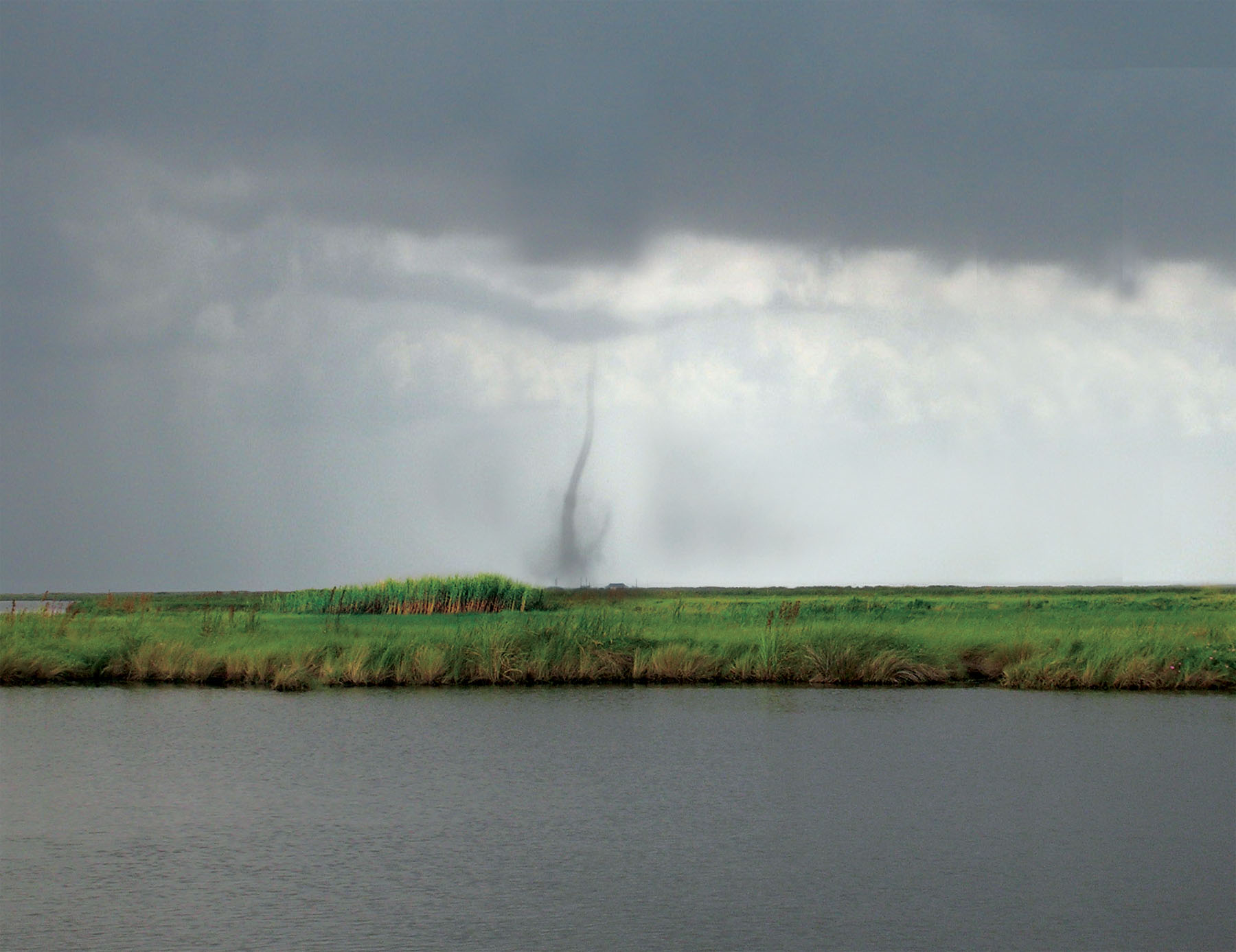 Water spouts can be extremely dangerous to fishermen.
Cue the carnival music and bring up the midway barker "Step right up, everybody wins!"

That old chant could very well describe the fishing on Sabine and Calcasieu for the next several weeks. When everything comes together in November it seems there is almost no wrong way to turn and nearly every pattern produces.

Just like the fish and game we pursue, fishermen also feel the change as the days get shorter and the temperatures settle to that just perfect range. The fact that the conditions have changed is not wasted only on fishermen, your outboard even seems to have a little extra pep under the cooler and crisper air. Back when a four-stroke was taboo and two-strokes ruled the water, it was almost like getting a brand new engine when the humidity and temperatures reached that perfect point. My outboard's throttle response always seemed magnified, like an old horse frisky to get out and run. This is the time of the year we have all been waiting for; embrace it and enjoy it, it won't last forever.

Fishing in the fall months means different things to different people and there is no one style or pattern better than the other. I know anglers who just absolutely live to chase schooling fish under the birds in the fall, many of whom seldom venture into the salt in other seasons. We have all seen freshwater anglers who just can't stand to let the opportunity pass or the hunter who needs one last fix before stowing their gear and chasing whitetails fulltime. Still others embrace the opportunity to look for that one fish they have been chasing their entire life and nothing beats the allure of trophy trout. The silent army of waders that are sworn to chase big trout will begin their assault this month and continue on until most have put their boats in storage as the winter separates the hard core angler from the casual. These two patterns represent both ends of the spectrum and there are many more in between that will yield just as good results so there are really no bad choices.

Another very popular pursuit during the coming weeks will be the highly anticipated fall flounder run. Sabine Lake made its name as Texas' premiere flounder fishery many years ago and it still stands on the top of the heap as far as flatfish are concerned. The endless shoreline drains and cuts that lead to the miles of marshes along the east side of the lake are a flounder fisherman's paradise. The only problem many flounder fishermen have during this time of the year is turning their backs to the flocks of gulls working over schools of trout and redfish. For sheer numbers of flounder the Louisiana shoreline of Sabine will be hard to beat, but if you want a bona fide big flatfish you need to get in the deeper water of the ship channel, ICW, the Sabine or Neches river. There is no disputing that the biggest flounder caught year after year come from deeper water, it's just that cut and dry. Live bait fished on a Carolina rig near a break or drop-off is a common theme when searching deeper water for flounder. Much the way freshwater fishermen target big catfish is how one needs to think in order to score big flounder; eddies in the current that offer up great ambush points are tops on the list. And don't hesitate to use large baits, big croaker or mullet will often yield flounder that have mouths so big they may make you nervous when you get near them. That's a nice problem to have.

Speaking of fishing the rivers, for years when I first started saltwater fishing I couldn't understand why people went out in Sabine Lake when we were catching all the trout and redfish we wanted miles up the river. The opportunity to make short runs and not worry about the wind blowing you all around is enough to make most anglers pay attention to this area. Throw in the chance to catch some really big fish and you have a wonderful backup plan that rarely seems to disappoint.

The list of usual suspects found while fishing the rivers is long and diverse and much depends on how much runoff we get from up north but, generally speaking, they are usually there in reliable numbers. Obviously the redfish is tops on the list followed closely by trout and flounder as these species receive the lion's share of angling pressure. Others that show up in good numbers are some very respectable sand trout, croaker, and black drum. All of these are more than willing to eat either live shad, mullet, or mud minnows along with shrimp fished on or near the bottom. Occasionally we get a party crasher or two that will show up and make you scratch your head, jack crevalle and tarpon probably top that list. The other big fish that has gained popularity among local anglers this time of the year is the striped bass. They grow to be rather large and will eat just about anything that won't eat them. Perhaps the method that provides the most adrenaline is throwing big topwater plugs at them when you find them schooling; the surface strikes are vicious to say the least.

Now that we have covered the area with a broad stroke there is one other thing that needs to be mentioned as we head into this wonderful time of the year and that's watching the weather. This time of the year is known for producing some wild weather swings and really nasty fronts that can get quite dangerous. Just recently two local fishermen were in Black's Bayou in an aluminum boat when a thunderstorm moved in and forced them off the water. As they were pulling anchor their boat was struck by lightning. One fisherman was killed and the other sustained multiple injuries. The images of the boat are incredible. Like many, I too have been guilty of taking chances with the weather and I sincerely hope these images will encourage greater caution in the future. Be aware of your surroundings, take all necessary precautions, and by all means realize that there is no fish out there worth risking your life to catch. Keep a close eye on the horizon so you can enjoy many more magical fall days on the water.