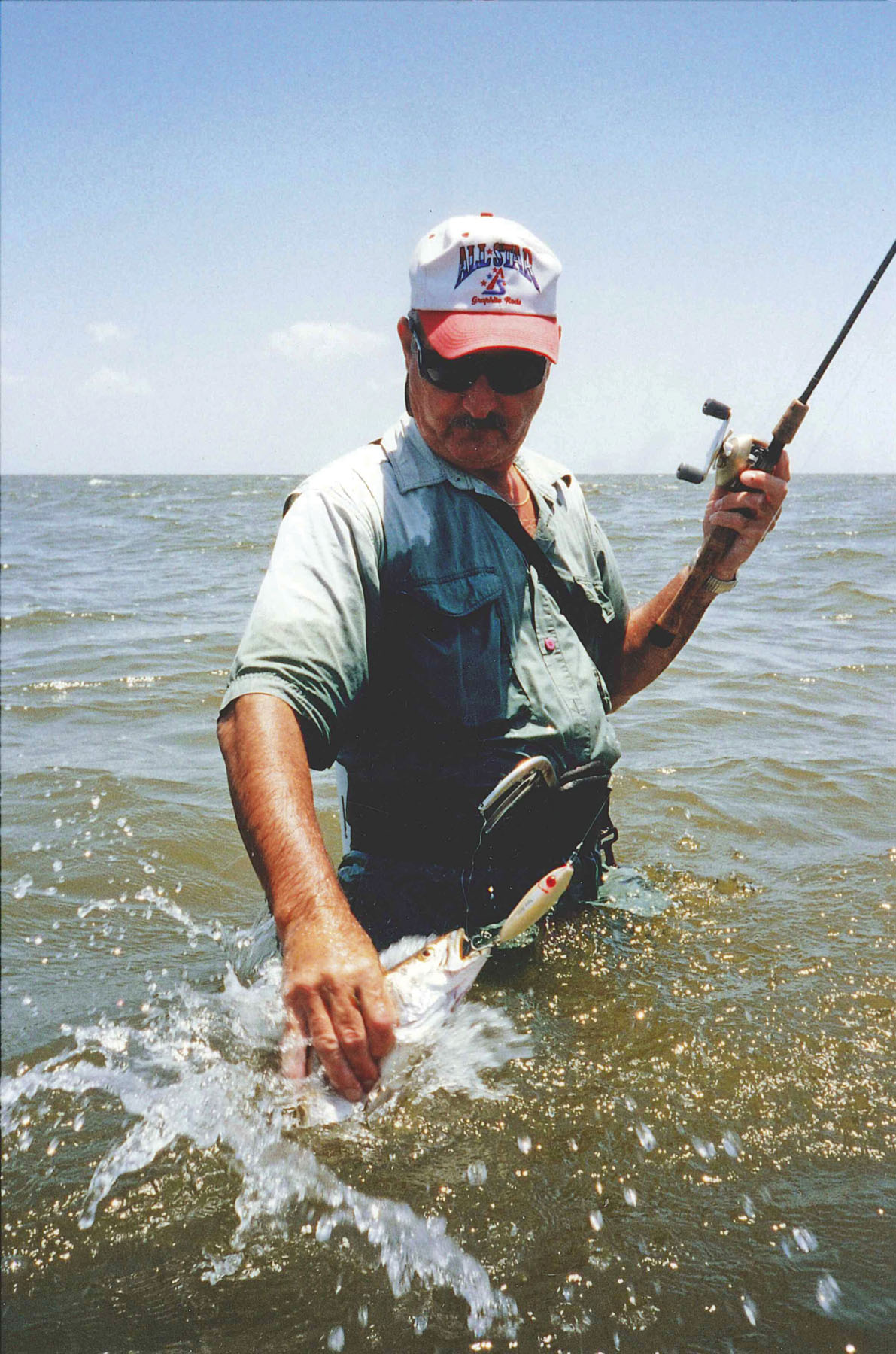 Warm afternoons in the fall and winter can provide wade fishermen some of the best opportunities of the year.
Everybody has heard the old saying "jack of all trades and master of none" an obvious reference to knowing a small amount about a lot of things while never really mastering any of them. You may have also heard about someone being an "all around type" who excels at a wide variety of tasks or actions, like a decathlete in the Olympics. Watching an angler who is comfortable in any situation or body of water is nothing short of impressive. There have been some great tournament anglers who for one reason or another are always able to figure out a pattern and catch fish even when they are in unfamiliar water.

Being versed in multiple techniques enables us to be better anglers and at the same time allows greater opportunity to enjoy our time on the water. For many years before I settled down to guiding solely in saltwater I loved to fish Toledo Bend and Sam Rayburn. The change of venue was a welcome diversion from the day after day monotony of staring at the same water. It was always like a shot in the arm when you stepped out of the truck, smelled the freshwater, and could hear wind in the big pine trees. On the other hand I felt the same way when it was time to leave the big lakes and get back in the salt. Little did I know the crossover fishing I was doing would only help me become a better overall fisherman later on.

In previous columns I have often mentioned how fond I am of baits that work well in both fresh and saltwater. The varied options allow you to cover basically any situation you may encounter but all the tackle in the world won't do you any good if you are not willing to change your approach. As a guide I have had plenty of people come to fish with me and have a specific target fish to chase or a method they would like to use. On more occasions than I would like to remember we had to change our plans due to unforeseen factors like weather, tide schedules, or water clarity. Fortunately for those of us here on Sabine and Calcasieu we have plenty of places that offer outstanding back up plans.

There are days when the alternative options are not exactly the style of fishing that some individuals would prefer but they certainly beat not fishing at all. Imagine the feeling you would have if you planned an outing months in advance only to wake up the day of the trip and the wind is howling 20-plus miles per hour and it appears there will be relief in sight. The options begin to get slim unless you are willing to adjust and be flexible.

The thought of calling it quits at the dock and making a long miserable drive home compared to the opportunity of catching fish, even though it may not be exactly how you want to fish, is a no-brainer in my book. I would much prefer to catch fish than be so proud or stubborn that I turned down the opportunity and wasted the day.

I have opened some eyes on some of my fellow anglers who were willing to try a different approach. I have seen fly fishermen turn into giggling children while soaking live shad and catching one trout or redfish after another. Same can be said for big trout hunters who gave in and used a different technique and adjusted their expectations. All of a sudden the thought of a fish fry outweighed their desire to fight the elements. It's funny how that works sometimes.

The winter months are an exceptional time to employ this strategy of flexibility because the weather quite often becomes such a limiting factor. Even with the thought of not being able to get to the open bay, it's mighty nice to know that you have a fantastic backup plan in your hip pocket. The confidence that comes with knowing you can catch fish regardless of the conditions is huge comfort to any angler, especially those with limited schedules.

The shelter of the Sabine River and surrounding marshes offer a security blanket of sorts from all the bad things the weatherman and Mother Nature can throw at angler. I truly enjoy fishing the protected water and do so often with various baits. The swimbait and crankbait have become mainstays for many anglers and they have more than proven their worth. Texas Saltwater Fishing's own Capt. Dickie Colburn, who is as knowledgeable as it gets on the Sabine, is one of the swimbait's biggest fans because they shine in every environment from 2-feet to 20. The swimbait is incredibly versatile and user-friendly, capable of being fished using a variety of methods and retrieves.

Perhaps the ultimate in user-friendly methods that truly expands angler flexibility is willingness to use live bait. For plenty of anglers, the thought of using live bait is beneath them and in their minds a technique for folks who have not mastered artificial lures. As far as I'm concerned nothing could be farther from the truth.

Live bait does not guarantee fish, and it's not magic. Fishermen must still be able to locate structure and relate it to current strength and depth. A favorite method we use when throwing live bait is anchoring parallel to the shoreline on the first discernible break, usually in about 5 feet of water. If I have several folks in my boat I like to have a few fishing shallow while the others probe deeper water. The fish tend to travel along the breaks, either on top of the break or in the deeper water alongside, so it pays to cover all the bases. Once we figure out the most productive depth, we adjust boat position in order to give everyone equal access.

More often than not, anglers who never would have considered sitting on anchor and tossing live shad or mullet have the best time. The socializing that goes on along with the relaxing aspect is just what the doctor ordered from time to time. The numbers of fish and quality of fish don't hurt either. Some of the best speckled trout and flounder I have ever put in my boat came from using live bait in the winter, so to say I am slightly partial to the technique would be an understatement. If the conditions call for this approach I have no problem employing the technique and most of my customers generally enjoy having the option.

December will bring us an amazing array of possibilitiesfrom jetties to marshes and all the spots in between. Most anglers will be fixated on chasing the gulls to take the easy pickings when speckled trout and redfish school tightly and gorge on the last waves of migrating shrimp. Still others will be taking advantage of the tail-end of the big flounder run at the passes and along the deeper channels. The trophy trout chasers will undoubtedly take full advantage of warm afternoons and hungry fish in search of that fish for the wall. And there will still be others who never leave the seclusion of the protected water and they will have it all to themselves; until the weather turns nasty and the crowds begin to look for shelter. It does my heart good to see that shiny bay boat anchored up just a cast away from an old john boat and each one with anglers enjoying the fight of a fish. At that moment there are no classes or divisions between anglers, only fishermen enjoying the sport in their own way.