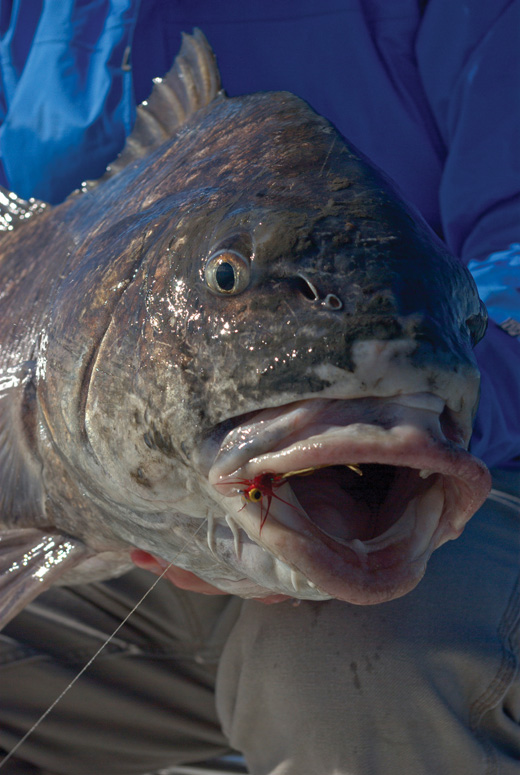 For many years I have tried to bring the readers of TSFMag stories that are not the same old repetitive and predictable season specific topics. It’s a given that during certain months there will be tons of ink dedicated to the pursuit of certain fish. This includes the big trout months, flounder runs, and spotted fever epidemics during summer when redfish steal the show. I get it, believe me I truly get it. And while so many continue to believe that the sun rises and sets with the Big Three – specks, reds, and flounder – this may not be totally true. I cannot count how many times I have told attendees at my seminars or during conversations at the dock just how much that Big Three type of thinking limits your fishing opportunity in so many ways.

I recently had this proven to me firsthand and I will admit it was beyond eye opening. My wife and I were down in Corpus Christi watching my son play baseball for the weekend so we decided to kill some time and take in a few sights. After checking out the beach we made our way to Doc’s under the causeway bridge for a cold adult beverage. As we sat at the bar overlooking the water, a group of guys came in and sat next to us. After ordering drinks they began to enthusiastically recount their day of fishing and all the fun they had.

My wife, being the more sociable one, asked if they’d had any luck, to which they replied, “It was awesome; we caught over 200 pounds!”

I was immediately baffled, everybody down here chases the Big Three, or so I thought. And catches of these species are typically described in limits or numbers landed. Maybe they’d been offshore.

Still trying to figure out just exactly what the guy meant, he handed me his cell phone so I could see the photos. There, lined up next to cleaning table, was a dock filled with black drum. I nearly shot beer out of my nose. In glorious digital color was proof that there are other species to target and enjoy on the dinner table.

I must admit the premise was foreign to me, hiring a guide to chase black drum, but I quickly gathered myself and congratulated the anglers on their great day. I wasn’t exactly sure what I had witnessed as we left Doc’s, never seen anything quite like it, but I knew I was both intrigued and happy at the same time. I needed to know more and called upon longtime fishing guide and Corpus resident, Jim Leavelle, to help me out.

Later that evening at supper, which coincidentally was fried black drum and shrimp, I recounted my story of the successful anglers to Jim and he sat back and smiled before answering my questions.

“You have no idea,” he said. “How big catching black drum and other species is down here. You can go to a tackle shop and there will be a full wall display of bottom rigs and other gear intended for drum and sheepshead.”

For years I had been telling anglers that believed the whole world revolved around wading, artificial lures and other expensive techniques that, they were actually in the minority and here it was in living color. Now don’t get me wrong, there are plenty of folks who target the “Big Three” fervently and there always will be, but the number of anglers who just want to catch a fish is exponentially greater and it is still growing. I’ve said before and I’ll say again, “Go to your favorite tackle dealer and watch how many lead weights and live bait rigs go out the door compared to $10 topwaters and $300 breathable waders.”

Now with all that being said, let’s look at what it’s going to take to go catch some of these fish. For my part of the world, Sabine and Calcasieu, the majority of the black drum are taken in deeper water along the rivers and channels.

The most popular and productive bait by far is blue crab, especially the claws. Commercial drum fishermen love using the claws because they are very durable and hard for small, non-target species to steal from the hook.

When using crab, either claws or cracked bodies, most anglers employ a Fish Finder rig, a variant of the popular Carolina rig – adapted to bait fishing. This consists of an egg sinker threaded onto the main line, next comes a barrel swivel with 18- to 24-inches of heavy mono leader on the opposite end, and finally a live bait or circle hook attached to the heavy mono.

Black drum are opportunistic feeders and will scavenge the bottom, trailing up the scent leaking down-current from the crab you are using for bait. Some anglers even take a few crabs and crush them up in a burlap sack and anchor it to the bottom to create a scent stream, sort of like chumming. By the way, this technique works equally well for red drum, black drum and sheepshead.

Speaking of sheepshead, these guys have also received a bump in popularity in recent years, thanks mostly to fly fishermen. Jetty anglers have long been fans of these hard-pulling bucktoothed fish, usually plentiful around the rocks. Many a savvy angler has probed the granite with a free-lined shrimp and caught their fair share. Fly anglers have gotten into the act and elevated the sheepshead from “convict fish” because of its stripes, to “Texas permit” because of it picky and wily nature. The fancy moniker adds credibility and stature to the once frowned upon barnacle chompers, at least in their eyes.

To make matters even more interesting, fly anglers have taken to targeting them on the flats alongside the more popular redfish. I know in the marshes that I frequent there are numerous opportunities to take some real stud sheepshead. I’m talking about double-digit fish that will get even the snootiest fly fisherman’s blood pumping. The largest fish I have seen caught was over 12-pounds, on a topwater plug, no less. My theory was that the fish was following the plug like they always seem to do, and opened its mouth at the same time the angler paused his retrieve – the perfect storm, so to speak.

Most fly fishermen who target sheepshead in the shallows prefer small crab or shrimp patterns they can scoot along the bottom to entice these finicky eaters. Sheepshead are very curious by nature and will follow a lure or fly for long distances without committing to a strike, an attribute that causes them to be compared to permit. Even though it’s somewhat blasphemous in the eyes of purists, the practice of spraying an attractant on a fly obviously increases your odds when targeting sheepshead. In fact, renowned Florida fishing guide, Mike Holliday, used to tie scent attractants into the body of some of his flies so his clients wouldn’t know it was there. The hookup ratio magically increased and the clients were happy – everybody wins.

The opportunities that are presented by some of these less-glamorous and less-targeted species are being discovered daily by scores of anglers who normally wouldn’t think twice about them. Just the fact alone that these fish are gaining credibility is a bonus for all concerned. As different species are being targeted, the pressure on the Big Three could (might) diminish, and that’s a win-win no matter how you measure it.

I would like to encourage you to consider targeting black drum and sheepshead, especially if you enjoy a fish supper after a day on the water. Both species make awesome table fare.

Anything I can offer to make fishing fun and accessible to folks who cannot afford boats and other expensive gear is yours for the asking. Sheepshead and black drum can be successfully targeted from banks, shorelines and jetties. Families can walk right in and go fishing. How’s that for opportunity?