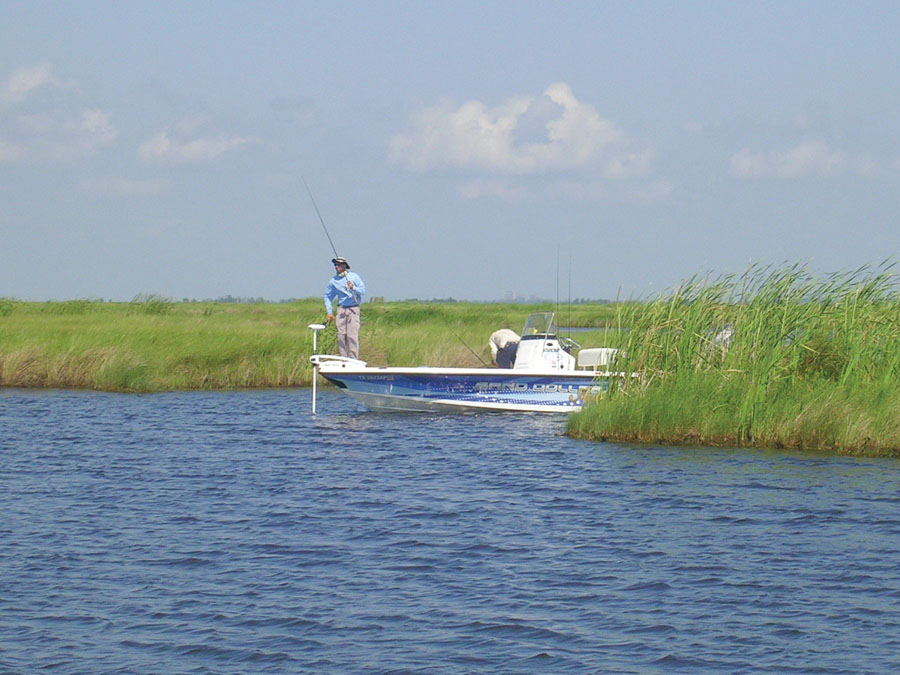 A quality trolling motor is a must-have tool for controlling the drift and maneuvering quietly into precise locations for anchored fishing.
You ever wonder what a Crayola 64-Pack, Baskin-Robbins 31 Flavors, and Jolly Rancher Hard Candy Assortments have in common? The answer is, they offer something for everybody.

If everyone did things exactly like everyone else, life would be ridiculously boring and mundane. It's choices and options that give each individual the opportunity to succeed and sometimes those options and choices are a little different than what others consider the best or only way to go. Taking a quick glance at the calendar right now means different things to different people, especially fishermen. If you flip through the pages of Texas Saltwater Fishing Magazine it won't be hard to figure out what the prevailing thought on most people's minds is this month–big trout. More often than not, hardcores are thinking wade fishing and throwing artificial lures.

One year I was at one the fishing shows conversing with a group of guides and tournament anglers having a great discussion and swapping stories on various subjects, and inevitably the style or different methods of fishing became the topic. I listened intently and heard basically the same story over and over of how this group of anglers spent their time on the water. After several stories it was more than apparent that these guys took it for granted that everyone fished exactly like they do and the thought that someone wouldn't was just borderline blasphemy. I can understand why they would think like this, especially when all the other fishermen they routinely hung out with did the same things they did.

I can also remember the looks on their faces when I said, "You realize you are a small fraction of the fishing population and ten times as many people fish differently than you." It was a Kodak moment to say the least. I invited them to go to their local sporting goods store and bait camps and watch carefully what other fishermen were buying. Contrary to their beliefs, there would be way more folks buying terminal tackle, cast nets, and "fresh dead" shrimp than ultra-high-end gear. The percentage of anglers who exclusively hunt trophy fish with the latest and greatest gear pales in comparison to Joe Angler who just goes out to get a bite and maybe catch dinner. Just a little something to think about.

Now, regardless of which end of the spectrum you may reside at, there are some outstanding options for you to choose from in order to catch both numbers of fish and better quality fish. For many readers of TSFM the thought of climbing out of a sleek bay boat to wade a pristine flat in search of a career fish is about as close to perfect as one can imagine. Yes, there will be plenty of good fish caught by waders during this time of the year and there will also be plenty of pages and print dedicated to that method as well. For others, the thought of crawling out of a perfectly good boat into cold water is about as foreign as ordering a bologna sandwich at a south Texas BBQ house. It doesn't make any sense but, for some, it's what they like.

Personally, I can honestly say that I enjoy both fishing out of the boat and staying in, makes me no difference as long as I'm fishing. However, I must admit that in my career I have been fortunate to put my hands on several true 30 inch speckled trout, and every one of them was caught while the angler was still in the boat. Perhaps that's because here on Sabine and Calcasieu we tend to spend a little more time in water that's too deep to wade unlike other venues down the coast.

Early spring is a fantastic time to locate those better fish in a little deeper water outside of the shallow flats. We spend much of our time in 4 to 6 feet of water making really long drifts that usually lie parallel to shorelines or other structure. Quite often we are in even deeper water as we probe the breaks along the Sabine River and ICW where some magnum trout and redfish stage up and avoid boat traffic and fishing pressure.

Making the most of water that's too deep to wade requires a certain set of skills, tools and a little bit of thought. Perhaps most important is good electronics and the ability to read them. Finding and interpreting bottom structure is an art that pays big dividends to those who understand how to do it. For years I've watched two of the best; Dickie Colburn and Johnny Cormier, take skills they learned locating fish on freshwater lakes early in their careers and apply them to fishing in saltwater. Subtle changes in depth or bottom contour can make all the difference and these guys certainly know how to find them.

Once you locate an area that has all the right ingredients, it is paramount to your fishing success to be able to stay put and/or control your drift. A quality trolling motor is a must; that goes without saying. Having the ability to hold your location with either a manual anchor, Power Pole, Talon, or some sort of stake-out system is another factor to be considered. Once you get on a drift and locate fish, it's much better to be able to sit in one position and see if there are more in the area rather than continue on the drift and come back to try and locate the same fish a second time. Many people are often surprised at how many more bites they are able to get in an area if they just take time to stop and thoroughly check it out.

Waders and folks who fish from the boat will share common lure choices for the most part but there will be certain advantages for both camps. Waders will obviously be able to stealth-stalk their quarry while boat fishermen can cover more water. Both approaches have pros and cons and each offers anglers outstanding opportunity to catch fish. Neither method is right or wrong at this time of the year. Back to 64 colors, 31 flavors, and hard candy assortments; taking advantage of available options is the best way to catch more fish.